FC Kansas City season preview: a return to the top? 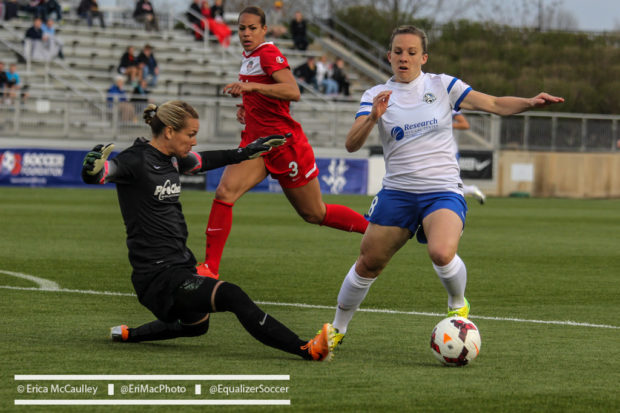 If Amy Rodriguez can continue to baffle opposing goalkeepers after a season off, FC Kansas City could be back near the top of the table. (Photo Copyright EriMac Photo for The Equalizer)

It was a sharp drop-off for Vlatko Andonovski’s team in 2016. A franchise that had won the previous two NWSL Championships suddenly found itself struggling to keep its head above water last year. It took seven matches to start the season before FCKC notched a win, and the team found itself near the bottom of the table for the majority of 2016.

The team made a run towards the end of the year, and should the season have been a couple games longer, FCKC could have made a push to claim a playoff spot. Defensively, Kansas City was as stout as ever, tying for second in the league in goals allowed (20).

It definitely wasn’t a boring offseason in Kansas City (or a little farther north, for that matter). Minnesota businessman Elam Baer purchased the team, initiating an ownership transition right before the NWSL College Draft in January. Longtime general manager Huw Williams also left his position, with Jean-Yves Viardin stepping in. Up top, it’s a new-look franchise.

And then, of course, there were the actual pieces on the soccer field that fell together over the winter: Forwards Sydney Leroux (Dwyer) and Amy Rodriguez both worked their way back to the pitch after giving birth to their respective children in 2016. Also returning to the team was veteran defender Becca Moros, who started 20 games for the 2015 NWSL championship-winning FCKC squad.

Despite the influx of talent, FCKC also had to say goodbye to some. USWNT veteran midfielder Heather O’Reilly opted to forgo playing in Kansas City again, and signed with Arsenal.

How quickly Leroux and Rodriguez are able to return to elite form will be the story of FCKC’s season. But the player to keep the other eye on will be FCKC’s top draft pick (5th overall), midfielder/defender Christina Gibbons. Gibbons has already been called up to the U-23 national team, and has stood out in FCKC’s training so far this offseason.

“I want to say (Christina) is the rookie that stands out, but I don’t see her as a rookie at all, because she plays like she’s been around forever,” Andonovski said. “I don’t know why she wouldn’t start. With everything I’ve seen from her, she’s a starter, and if you ask me, she’s not just a starter for Kansas City; I think she’s a starter for the national team. That’s how much I trust her.”

Andonovski’s attention to detail and the franchise’s focus on possession and defense have always made FCKC a challenge for the rest of the league. But in 2017, the power of this team’s offensive attack could be frightening. Shea Groom returns, after a strong showing in 2016. And USWNT forwards Leroux and Rodriguez will join the attack, after both sat out 2016 while pregnant. Fans could get a look at a 4-3-3 formation, with all three forwards working together to lead the offensive push.

Defense remains at a premium in Kansas City; VlatkoAndonovski figures out how to effectively use all of his attacking pieces; and the Blues earn another NWSL trophy.

A 4-3-3 formation never really gels, and FCKC struggles to pick itself up from the middle of the pack.