It’s the final weekend of the 2017 NWSL preseason, and that means many teams are trying to get one more competition under their belts before the regular season kicks of on April 15. It also means non-contracted players have one last opportunity to impress their coaches ahead of Monday’s 20-player roster deadline. Here’s a quick recap of what you may have missed.

Highlights courtesy of the Orlando Pride

The Orlando Pride closed their 2017 preseason with a 3-0 win over the United States U-23 women’s national team Friday afternoon. With the win, the Pride remain undefeated in preseason play.

“It’s been a reasonably solid preseason. I think we’ve gradually improved as we’ve gotten into the games. Today’s game was the toughest game of the preseason and we worked very hard,” Pride coach Tom Sermanni said after the match. “So, a lot of positive stuff, but we’ve got a lot of things to work on between now and the first league game [at Portland] next week.”

The win came largely thanks to the efforts of Kristen Edmonds, who scored the game’s first two goals and assisted the third. Her first goal came in just the 12th minute when she intercepted a pass from a U-23 defender and took the ball in alone before putting it in for the goal. She completed her brace in just the 25th minute when she collected a long ball from defender Steph Catley that was played on by a flick by rookie Danica Evans and again put it into the back of the net.

In the second half, Catley once again played Edmonds the ball, sending in another long ball for the midfielder as she made her run down the line. Edmonds then sent in a cross from the left that was fired into the goal by forward Jasmyne Spencer for the third and final goal of the match.

As Sermanni said, the Pride will next travel to Portland for their season opener against the Thorns on Saturday, April 15. The game will be the first Game of the Week broadcast on Lifetime.

The Red Stars downed the University of Notre Dame, 3-1, to finish out their preseason on a high after finishing 1-1-1 in the Thorns Spring Invitational tournament. Friday’s match, which was originally scheduled for Thursday, was postponed because of weather and changed to a closed-door match as a result.

Chicago came out with confidence, scoring in the game’s opening minutes when Jen Hoy sent in a perfect cross to Summer Green, who easily finished her shot for her first preseason goal. Defender Arin Gilliland next scored on a play originating on a set piece. Chicago was awarded a corner kick, which led to a scramble inside the box. Gilliland managed to head a bouncing ball past Notre Dame’s goalkeeper to double the Red Stars lead before the halftime whistle.

Notre Dame got on the board at the start of the second half when a member of the Irish sent in a ball into the upper net to prevent the shutout. The final goal of the match came in the last minute of regulation time when Notre Dame alum Katie Naughton got her head on another Chicago corner kick and perfectly placed it for the goal.

With the win the Red Stars improve to 2-1-1 for the preseason. They open the regular season on Saturday, April 15 in Houston.

The Boston Breakers wrapped up their preseason with a 6-0 shutout of the UConn Huskies thanks to braces by both Natasha Dowie and Tiffany Weimer. The Breakers were originally scheduled to face off against the UConn last weekend, but heavy snowfall the night before saw the game rescheduled for Friday night.

“Tonight was a good exercise for us to put in practice what we’ve been working on and what we’ve been talking about. It puts us in a positive frame of mind going into next weekend,” Head Coach Matt Beard said. “I’m glad Tats [Dowie] got a couple goals tonight. She’s had a good preseason. It’s good for her to get a few goals because she’s had a few chances in preseason where keepers have made some good saves. So for her, that’s positive.”

Dowie didn’t score the first goal of the match, but she did assist it when she headed a corner kick from Rosie White towards Weimer, who headed the ball past UConn’s keeper for the game’s opening goal. Dowie then got herself onto the scoresheet with a goal just seven minutes later.

The first half ended with the Breakers leading 4-0, with the third goal headed in by White followed by Dowie completing her brace. Boston would put two more goals in during the second half, with Weimer completing her brace in the 57th minute and rookie Hayley Dowd adding a single for her first goal of the preseason.

“I’ve been really pleased with preseason,” Beard added. “There’s still plenty to do, but we’re starting to see some of the detail we’re talking about and seeing them come together, which is very pleasing.”

Boston kicks off the 2017 regular season on the road against FC Kansas City on Sunday, April 16.

That makes 4 wins and 0 losses for the NC Courage in preseason! pic.twitter.com/X6L0Vegvo9

The North Carolina Courage finished its first preseason in the league with a 1-0 win over the North Carolina Tar Heels. Neither team had found the back of the net in the first half, but that changed in the second half when defender Jaylyn Odermann scored to put the Courage on the board. Odermann had previously been listed as in preseason camp with the Houston Dash.

The Courage kick of their inaugural season with a rematch against last year’s NWSL Final opponent, the Washington Spirit, on Saturday, April 15. 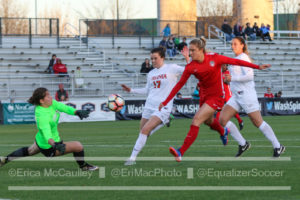 The Washington Spirit rounded out their preseason schedule with a 2-0 win over Virginia with Kristie Mewis and Joanna Lohman each scoring. Mewis’ tally was her fourth of the preseason, tying her with Katie Stengel for the team lead.

The opening 20 minutes of the match lacking any really threatening chances as an easily handled shot by Cheyna Williams was the only chance recorded by either side. In the 21st minute, however, Mewis broke the deadlock when left back Kasey Kallman played the ball to Mewis in stride. Mewis then chipped the keeper from close range for the score.

The Spirit didn’t muster too other many dangerous chances in the first half as the team struggled to connect passes. Washington ended up registering only two shots on goal before halftime.

In the second half, Washington held possession better and generated more opportunities offensively. Unfortunately for the home side, a lot of these chances were off target. Before Lohman’s goal in the 65th minute, Tori Huster,  Stengel, Williams and Lohman herself would all record chances that either hit the woodwork or went wide of goal.

Lohman’s goal started when Franny Ordega, who had entered the match just moments before for Williams, sent a cross into the box from the right side. After the Cavalier defense failed to smother the opportunity, Lohman bounced on a rebound and tapped in near the left post.

Defensively, the Spirit performed well, denying Virginia much possession in or around their 18 yard box.  The team held Virginia without an attempt on frame until the 86th minute of play when Alissa Gorzak fired a shot from the top of the box that required a full extension save from Didi Haracic.

Overall Coach Jim Gabarra was thought his team applied the press better than in previous games, but was unhappy with the tempo.

“I liked the organized press. It was a lot better than in previous games. We were more connected and pressing as a unit. I didn’t like that we were taking too many touches and not really playing to our style of play in possession but it got better as the game went on. It was a lot better in the second half.”

Washington will open the 2017 season next Saturday at home against North Carolina Courage.

The Seattle Reign closed out preseason competition last night with a 3-0 shutout over the Washington Huskies. The Reign have played the Huskies in each of the last four preseasons, winning each contest.

“First clean sheet of preseason and I think that’s again a good omen going into next week’s game,” Head Coach and General Manager Laura Harvey said. “Pushing us on to do that was a big thing tonight. We spoke about [it] after UCLA and said that’s something we’ve got to be very proud of.”

That clean sheet was partly thanks to goalkeeper Madalyn Schiffel, who made her debut for the Reign when she subbed in for Haley Kopmeyer in the 56th minute. Schiffel signed a contract with the Reign in January after her rights were traded by the Washington Spirit in November 2016 in the trade that also brought Christine Nairn back to Seattle.

Forward Beverly Yanez scored the game’s opening goal in the 22nd minute on a play originating with Japanese-international Nahomi “Naho” Kawasumi slotting in Merritt Mathias behind defense. Mathias then sent a low cross to a wide-open Yanez near the back post where the forward easily tapped the ball into the back of the net for her first preseason goal.

Just seven minutes into the second half, the Reign would double their lead thanks to Kawasumi, and Kiersten Dallstream scored the final goal in the 64th minute. For both Kawasumi and Dallstream, it was the second consecutive matches for them to score, as both also scored in the Reign’s 3-2 win over UCLA on Tuesday, April 4.

“We’ve really challenged ourselves tactically on a lot of things that we need to be good at, and I think we’re starting to now get into a bit of of a rhythm moving forward [to] next week’s game,” Harvey said. “We’re moving into the right direction for sure.”

Up next for the Reign is their 2017 home opener against Sky Blue FC on Saturday, April 15 at Memorial Stadium.

Sam Kerr scored twice to lead Sky Blue a a 3-0 victory over Penn State to close out an impressive preseason in New Jersey. Newcomer Daphne Corboz also scored in the match played at Georgian Court University where Sky Blue call their training base.

“First of all, we would like to thank Penn State for presenting us with such a fantastic challenge to finish off our preseason,” Sky Blue head coach Christy Holly said. “We knew they would be exceptionally disciplined on the defensive end and create some issues for us from an offensive standpoint. I felt that our team dealt with those difficulties very well and created some excellent opportunities. We are very excited about our potential for this season.”

Kerr scored in the 28th minute after Kayla Mills made an aggressive run from the back and Kerr turned on the pass and scored from just inside the 18-yard box. She made it 2-0 in the 62nd minute on a sequence that started with Sarah Killion and went through former Penn State star Maya Hayes who got the assist.

Corboz tallied in the final minute on a pass from rookie 4th round pick McKenzie Meehan. Corboz, known more for her passing than her scoring, signed with Sky Blue over the winter after spending two seasons at Manchester City. She played her college soccer at Georgetown.

Caroline Casey got the start in goal and shared the clean sheet with Tori Corsaro. It was likely the end of the line for Corsaro who is not expected to be part of Sky Blue’s final roster when it is announced on Monday.

Friday Roundup: US Soccer names U-20, U-17 head coaches
USWNT ends series against Russia with 5-1 win