Friday Roundup: US Soccer names U-20, U-17 head coaches 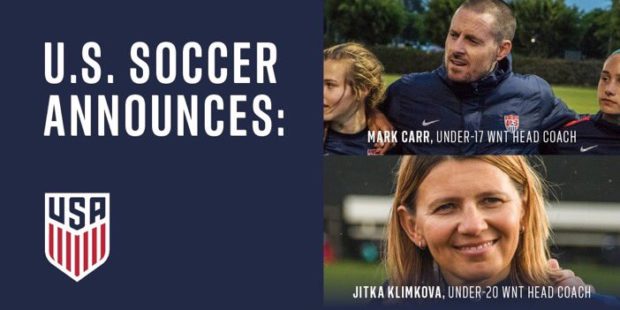 Also in today’s roundup the Dash finish preseason on a high note, the Courage add three to their coaching staff, and Lisa De VAnna signs with an Australian semipro team

U.S. Soccer has made head coaching hires for the two most prominent youth teams. Jitka Klimkova is the new coach at the U-20 level, and Mark Carr will lead the U-17s. Both have extensive experience in the U.S. Soccer coaching ranks. Klimkova was most recently the U-19 head coach and Carr has been the head coach of the U-15s.

Over the last few years we’ve hired a cadre of Development Coaches as part of a plan to expose them to the international game and develop them into future candidates for our World Cup age-groups,” said Women’s Youth National Teams Director April Heinrichs. “In hiring Mark and Jitka as our U-17 and U-20 coaches respectively, we’re putting two of our best and most experienced coaches in front of our best players. They have age-appropriate head coaching experience on the international level, are familiar with our player pools, methods of coaching, style of play and philosophy. Mark and Jitka will start with their respective teams in their upcoming camps without skipping a beat.”

{USWNT: Lavelle, Dunn shine in 4-0 thrashing of Russia | Will play in Sweden, Norway}

Both teams have clear roles as developmental arms for the senior team, but both will also be focused on their respective World Cups next year. The next U-20 World Cup is in France in August 2018. The U-17s will be in Uruguay in November and December 2018. Both teams had disappointing showings in 2016. The U-20s dropped their final two matches to finish 4th and the U-17s were dumped out in the group stage.

“I love working for U.S. Soccer and continuing to embrace the many challenges of being successful at the international level,” said Klimkova. “I have always dreamed big, had ambitious goals and worked hard to achieve those goals, which are qualities we will ask for from our players. My main motivation is to work with extremely talented players, coaches, support staff to help make all of us better. I look forward to continuing to create a positive and successful culture within our Youth National Teams.”

Added Carr: “Working day in and day out with U.S. Soccer and learning from some incredible people around me while coaching the U-15 Girls’ National Team has prepared me to take on this fantastic opportunity. Moving up with this group is a natural progression that I feel very comfortable with and I’m extremely honored and excited to continue the development journey with this special group of players. My focus will be to help each player grow and develop and continue through our pathway, while at the same time, embracing the opportunity to qualify for the 2018 U-17 Women’s World Cup and then doing our best to win it.”

Dash wrap up preseason with win over texas a&M

The Dash finished their preseason schedule with a 2-1 victory over Texas A&M on Thursday night at the Aggies’ home stadium, Ellis Field. Amber Brooks and Rachel Daly scored for the Dash.

Daly won it in the 79th minute taking a pass from Cari Roccaro at the top of six and slotting home the decisive goal.

The North Carolina Courage announced three additions to their coaching staff on Friday. Bill Palladino, Sean Nahas and Nathan Thackeray have all been working with the club throughout preseason but were not officially named to Paul Riley’s staff until Friday. Scott Vallow, who worked came with Riley when the team relocated from Western New York and also worked under Riley in Portland, had previously been named an assistant coach.

“We are delighted with the coaching staff we have put together,” Riley said. “I think it further emphasizes the clubs desire to push the women’s game forward at the professional level while embracing our massively successful youth component.”

Palladino’s name is familiar to soccer fans in the state as a long-time assistance to Anson Dorrance at the University of North Carolina. Together they have helped the Tar Heels win 21 national championships since 1982. Palladino is married to Wendy Gebauer Palladino who played for the team and was later a color commentator on WUSA and national team broadcasts.

Nahas has been involved in the local youth scene for more than a decade. In addition to his role as Courage assistant he will also serve as director of the recently announce NC Courage U.S. Soccer Girls Academy. Thackeray played for Bradford City in England and began his coaching career at Young Harris College in Georgia. He has also been the Head of Goalkeeping at the Houston Dynamo Academy and Director of Goalkeeping at CASL and the RailHawks Academy.

De Vanna has made many stops in U.S. club soccer. She first touched down in America to play for the Washington Freedom in WPS. After two years there, she joined magicJack. Jim Gabarra, who coached De Vanna at the Freedom, brought her to NWSL to play for Sky Blue, and she enjoyed her best season in 2013. She has since played for the Breakers, Spirit and Pride.

De Vanna has more than 100 caps for Australia and has represented her homeland in the last three World Cups and at the 2004 and 2016 Olympics. She scored four goals in the 2007 World Cup en route to being named to the tournament’s All-Star Team. She was again named to the World Cup All-Star team in 2015.