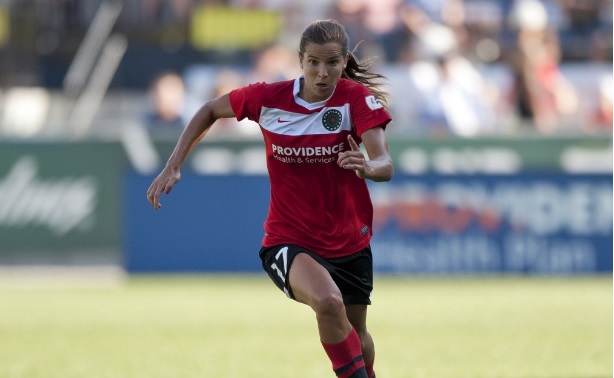 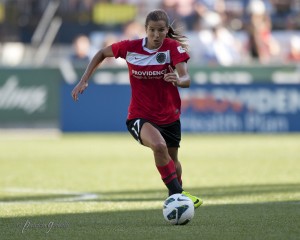 Tobin Heath is questionable for Portland’s season opener after being sidelined with a back injury. (Copyright Patricia Giobetti | http://www.printroom.com/pro/psgiobetti)

The Portland Thorns may be without several of their star midfielders–most notably Tobin Heath and Lindsey Horan–in their season opener against the Orlando Pride on Saturday, April 15 according to Jamie Goldberg of The Oregonian.

News of the injuries was released when first Heath then Horan were ruled out of the United States women’s national team training camp ahead of a pair of friendlies against Russia, the first of which will be played tonight. The Thorns are reportedly continuing to monitor Heath and Horan, both of whom have been sidelined with injuries (back and hip flexor, respectively), to determine the timelines of their returns.

“We’re still trying to find out a little bit more. We had Lindsey progressing with some of her exercises. Tobin, her exercises are off the field and we’re taking it easy,” Head Coach Mark Parsons told Goldberg. “Fingers crossed for short-term. Short-term could be a week.”

If either player is not healed enough to play in a week’s time though, they will likely be unavailable for the Thorns on opening day. Even if they are, Parsons may decide to err on the side of caution and leave them out of the starting XI.

The Thorns are currently trying to get back to full strength as a number of players are currently out with or recovering from injuries. Dagny Brynjarsdottir suffered a setback in her recovery from an off-season back injury and has yet to be able to participate in any preseason activities. Katherine Reynolds is also dealing with a groin strain and may be ready in time for the home opener, while Hayley Raso should be available on the 15th after nursing an ankle injury. Both Meg Morris and Nadia Nadim have recovered from serious injuries suffered in 2016 but continue to build fitness ahead of the 2017 season.

Just two days after the Ireland women’s national team held a press conference to air grievances against the Football Association of Ireland, the two sides have negotiated an agreement. According to both parties, all issues to be addressed were resolved.

“The Association is pleased that both sides have reached common agreement and a settlement, which allows the two parties to move forward together as one, in the best interests of Irish football,” the FAI said in a statement released by the federation.

The team released a statement via the Professional Footballers Association of Ireland, the players’ union, on Twitter, confirming that all issues had been resolved.

Statement on behalf of our members, the Ireland Women's National Team. Thanks for all the support for these inspirational women! @SIPTU pic.twitter.com/4s9SGKfCh9

Among the complaints by the players were being forced to change into team gear in airport bathrooms, having to share team warm-ups with the youth national teams, lack of match bonuses and no compensation for the loss of income suffered by players missing work due to national team duties. The team also asked for a nutritionist, individual strength and conditioning programs and a full-time goalkeeping coach, among other requests.

With the agreement, the Ireland WNT returns to training in preparation of its friendly against Slovakia on Monday, April 10.

The news came less than 24 hours after it was announced that U.S. Soccer and the USWNT had negotiated a new CBA.

In a friendly between the reigning Olympic bronze and silver medalists, Canada defeated hosts Sweden, 1-0. With the win, Canada improves to a 4-1-1 record for 2017.

One of Canada’s best opportunities of the first half came in the 21st minute when captain Christine Sinclair received the ball on the right side. The lack of pressure from Sweden’s defense allowed her to wait for Sophie Schmidt to make a run down the middle. Schmidt sent Sinclair’s pass rocketing towards goal with a shot taken well outside the 18, but Sweden’s goalkeeper Hedvig Lindahl dove to knock Schmidt’s shot wide.

The match’s lone goal came in the 33rd minute off a 46-second sequence consisting of 16 passes and eight different players. Stephanie Labbé reset the play, and the ball began moving between defenders as Canada calmly maintained possession. The play slowly moved up the field where Deanne Rose collected the ball on the left before passing to Sinclair, who took a couple touches before lobbing the ball to Janine Beckie. From just inside the box, Beckie sent a bouncing left-footed shot past Lindahl and into the side netting.

Sweden fought hard for an equalizer throughout the second half, but Canada’s defense was stronger than the Europeans’ attack. The Swedish side nearly found the back of the net in the 56th minute when Labbé had trouble getting through traffic to collect a bouncing ball, but Sweden were unable to get off a decent shot before Schmidt cleared the ball out of bounds.

The last 10 minutes saw Sweden take a number of shots in search of a last-minute equalizer, but to no avail. The first came with second-half substitute Hanna Glass put a shot on target, but Labbé easily denied Glass of the goal. Linda Sembrandt and Lotta Schelin both nearly scored in the final minutes of the game, only two see both shots go just wide of their target.

Canada will next travel to Erfurt, Germany on Sunday, April 9 to take on No. 1 team in the world and reigning Olympic gold medalists. 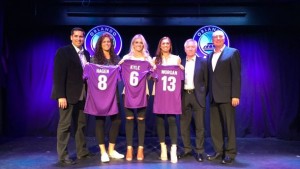 The Orlando Pride have waived forward Sarah Hagen, one of the first three players signed by the team ahead of its inaugural season in 2016. In that season Hagen made eight starts over 17 appearances, scoring two goals and recording two assists in 587 minutes played.

“Making a move like this is never easy, and it was an incredibly hard decision to part ways with Sarah,” Tom Sermanni, head coach of the Pride, said. “Sarah has been the consummate professional both on and off the field. We thank her for her commitment to the Pride and wish her the best of luck in her future, hopefully in the NWSL.”

Hagen came to the Pride via trade with FC Kansas City, where she played for two seasons and won back-to-back NWSL Championships. Prior to the NWSL, Hagen played in the Bundesligan for FC Bayern Munich after originally being drafted by the Philadelphia Independece in the first round of the 2012 WPS Draft.

The Boston Breakers announced on Thursday a new layout plan for Jordan Field, their home stadium since 2015. The new plan will feature a new seating plan that increases capacity to 4,100 seats, including 3,000 seats along the main touchline and another thousand behind the far goal.

“We have worked hard to be able to increase our capacity slightly and to also improve the fan experience that we offer within the stadium,” Boston Breakers president of business operations Mark Thomas said in a statement from the team. “We hope that our fans will really get behind the team from the new vantage points within Jordan Field.”

Last season the Breakers had a 3,570 average attendance despite finishing the season 3-15-2 for the season (2-6-2 at home) and at the very bottom of the table.

The Breakers return to Jordan Field for their home opener on Sunday, April 23 when they take on Sky Blue FC. 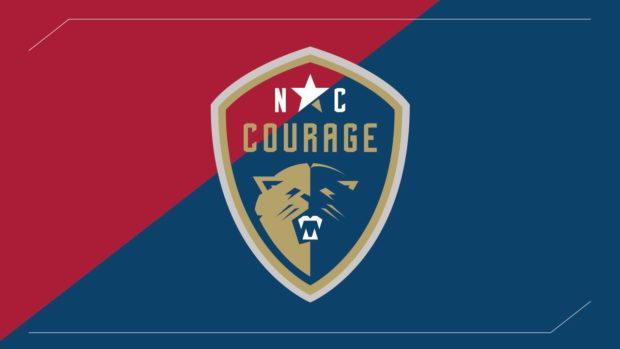 The North Carolina Courage announced it is launching a Girls Development Academy this fall.

Sean Nahas will direct the Girls DA teams for the Courage. A veteran youth coach, Nahas currently serves as an assistant coach to the U-20 U.S. women’s national team, which won the U-20 Women’s CONCACAF Championship in 2015 and was a semifinalist at the 2016 FIFA U-20 Women’s World Cup.

The U.S. Girls Development Academy currently consists of approximately 70 teams and will kick off its inaugural season this fall.