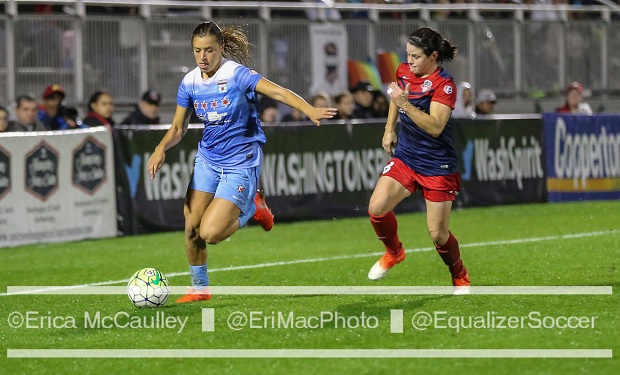 The Chicago Red Stars look for redemption after falling in the NWSL semifinals the past two seasons. (photo copyright EriMac Photo for The Equalizer)

Since the inception of the National Women’s Soccer League, the Chicago Red Stars have made incremental progress each season. After finishing mid-table in 2013, they drafted well, added a few pieces and in 2014 only missed the playoffs on criteria. Then, in 2015, more adjustments and another solid draft earned them their first playoff berth—one that ended quickly with FC Kansas City scoring three times inside the first 25 minutes of play.

In 2016, Chicago took another step forward, qualifying for the playoffs again and performing much better than they had in the 2015 post-season. While the team still exited in the semifinal round, the Red Stars gave the Washington Spirit everything they could handle en route to a 2-1 loss in extra-time. They even had a chance to win the game in regulation when Christen Press rounded goalkeeper Kelsey Wys and put a left-footed shot off the crossbar with the score tied 1-1 in the 2nd minute of second half stoppage time.

The Red Stars didn’t make any major moves this winter, nor did they need to. Sticking to their formula of slow, calculated, piecemeal improvement, head coach Rory Dames and the Chicago front office have only tweaked their roster since last season.

Over the winter out went midfielder Amanda DaCosta and in came Morgan Proffitt, Michele Vasconcelos and Lauren Kaskie via the draft. Dames cited both Proffitt and Vasconcelos as potential Rookie of the Year candidates, but Vasconcelos will have to wait until 2018 to make her debut after announcing a pregnancy in February.

The Red Stars acquired Summer Green in a trade from Seattle in December, and the forward has scored two of the team’s three goals in preseason inter-squad scrimmages while also providing the game-winning assist in the team’s preseason match against Houston. Dames knew Green from his days coaching youth soccer against the Michigan native and told The Equalizer, “I’ve watched Summer play forever, going back to her [youth games]. She’s ruined my day on a number of occasions.”

Chicago also had eight players go abroad this winter, plying their trade in Australia’s W-League and picking up four months of valuable off-season training and games.

Sofia Huerta had a strong campaign in 2016, picking up seven goals after notching six during her rookie season in 2015. She also put to bed the notion that she couldn’t score while playing with Press, scoring all but one of her goals last year with Press on the field.

In the off-season, Huerta played in Australia for Adelaide United and continued her scoring streak there, tallying eight times in 12 matches.

The Idaho native could be on the verge of a career season in 2017 and provide Chicago’s attack with the extra boost it needs to play for the title.

“I feel sharp, I feel fit and I feel ready,” said Huerta.

Before Chicago gets down to business this year, Dames will have a series of difficult roster choices ahead of him. With 19 returners and seven newcomers still on the preseason roster (Julie Ertz (nee Johnston) doesn’t officially count right now because she is “out-of-market”), the head coach is full of praise for the players he has in camp.

“It’s the first year that we have 25 legitimate players of this level for 20 spots,” explained Dames. “I’ve never been in that situation—it’s going to be hard to make those decisions.”

He knows that Chicago’s schedule this year is going to require the depth of all 20 players on his roster and is excited to start seeing his youngsters develop. In some ways, he almost feels that the league’s roster rules punish the Red Stars for being too effective at developing their young talent.

Dames points out Katie Naughton as his most improved player from a year ago and won’t commit to starting the same back line he did in 2016. He has been using Taylor Comeau—who played exclusively as a midfielder last year—as an outside back in preseason and touts her athleticism and competitiveness while stressing she will one day be one of the league’s best defenders.

He was impressed with Courtney Raetzman’s performance against Portland in Chicago’s first preseason game and notes that Mary Luba has finally gotten serious about developing her game. “She does things that are special. She does things you don’t teach players to do,” Dames pointed out.

The coach has also been surprised by the quality of his newcomers in camp this year, specifically pointing to Simone Kolander. He knew she was fast and could get in behind defenses, but offered, “She’s got more tools in her kit than what was advertised. You don’t score a lot of goals in the Big Ten without having some special qualities.”

Considering the returning talent Chicago has and the team’s performance the last two years, getting the roster down to 20 may be one of the biggest challenges it faces this season.

Once the 2017 campaign kicks off, Chicago will likely rely on its tried and tested formula of a stingy defense, a high work-rate and Press golazos to grind out narrow wins. The biggest question heading into the season seems to be who will be the starting defenders and what formation Dames will use.

The coach has spent the preseason tinkering with a 3-5-2 and said, “We definitely have the personnel to do it, we have the athleticism to do it.”

He also insists that he decided to explore a three-back last fall, prior to it becoming en vogue after the United States national team made the change. Noticing that Chicago frequently scored goals late in matches when they became more aggressive going forward in 2016, he decided he needed to give a 3-5-2 a serious look this season.

There’s a quiet confidence around the Red Stars this season, and everyone seems to know that this is a championship-caliber squad. Players like Julie Ertz, Vanessa DiBernardo, Danielle Colaprico, Arin Gilliland and Huerta, who have formed the backbone of the team over the past few seasons, are all now tested veterans—despite all being under 25 years old.

Add into that mix goalkeeper Alyssa Naeher, defender Casey Short and Press, and expectations for Chicago this season are high.

Even Dames, who describes himself as “more of a glass half-empty, than I am a glass half-full guy,” is excited and positive about what the team can accomplish this season.

The team hasn’t had Julie Ertz in camp this preseason due to her wedding and honeymoon and Dames said, “We’ve missed her leadership.”

She picked up a groin injury during the SheBelieves Cup and with everything else going on, the coach gave his defender the option of not coming in. That, he says, has limited a little of what Chicago has tried to introduce tactically, knowing that Ertz will be key to any strategic decisions they make this year. That fact could potentially slow the team down early in the season.

Dames’ teams have also benefited from a constancy in years’ past. It has usually been easy to predict his starting XI, his formation and even what substitutes would be made under what situations. And his players have always seemed to thrive under that consistency, knowing their coach has faith in them and knowing exactly what their roles are and how to execute them.

Counter-intuitively, the Red Stars’ success in developing players and drafting so well over the past few years may have inadvertently given their coach too many options heading into this season. With a possible switch in the formation on the horizon and the difficulty of finding playing time for so many talented players, Dames will have new challenges to contend with in 2017.

Another obstacle may be dealing with higher expectations. Since their inaugural NWSL season in 2013, the Red Stars have enjoyed a relative anonymity. With nearly everyone involved—from players, to the coaches, to the fans—expecting big things out of the team this year, there will more attention on the team than in past seasons and more pressure to win early and often, both from inside and outside the organization.

How the team responds to that pressure, especially if and when they hit bumps in the road, will be key to their success over the course of the 2017.

USWNT, US Soccer agree to new CBA through 2021
Red Stars reflect on productive winter in Australia