Steph Houghton is not known for her scoring but she buried one on the weekend in Manchester City’s FA Cup win. (Photo Courtesy: thefa.com)

Carli Lloyd and Crystal Dunn are on course to meet in the FA Cup final after their respective FA WSL sides were drawn into opposite semifinal ties on Monday. Lloyd’s Manchester City will host Liverpool while Dunn’s Chelsea are slated to travel to Birmingham City. Both semifinals are April 17. The winners will meet May 13 at Wembley Stadium.

Chelsea overcame an early deficit to Sunderland on the weekend to score five unanswered goals and breeze through the quarterfinal stage. Ramona Bachmann and Hannah Blundell each had a brace, and Drew Spence also scored in the win. Emma Hayes’s club will be seeking its third straight trip to the final. After lifting the trophy in 2015, the defense was cut down in last year’s final by Arsenal.

Manchester City required a stoppage-time winner from Nikita Parris to put aside a pesky Bristol City, 2-1. Steph Houghton had Man City on the front foot just 7 minutes in, but Bristol City went level just prior to halftime through Claire Emslie.

In the shocking result of the weekend, Arsenal relinquished the trophy after a 1-0 loss at Birmingham City courtesy of a 77th-minute goal from Marisa Ewers. Liverpool went through with a 2-0 win over Notts County. Caroline Weir and Natasha Harding provided both goals before 20 minutes were gone.

In other Notts County news, on Monday the club was given until July 3 to make good on tax debts owed to HM Revenue and Customs. It is the second time this year the case has been adjourned. The matter could eventually jeopardize Notts County’s place in FA WSL.

The North Carolina Courage are “closing in” on an agreement with Japanese defender Yuri Karamura, a club source confirmed to The Equalizer on Monday. The Japanese news account Nadeshiko.Football tweeted earlier in the day that Karamura had decided to leave Albirex Niigata Ladies to join the Courage.

Karamura was linked to the Courage prior to preseason but was not included on the team’s initial preseason roster. The club returns all four regular defenders—Elizabeth Eddy, Abby Dahlkemper, Abby Erceg and Jaelene Hinkle—from the side that won the 2016 NWSL Championship as the Western New York Flash. In January the club was sold to a North Carolina group headed by Steve Malik.
***
In other NWSL preseason news, Erin Smith has returned to Rutgers but could return to the Dash after graduation later this Spring. The defender was taken as the No. 33 overall pick by the Dash in January. Corey Roepken of the Houston Chronicle reported the news. 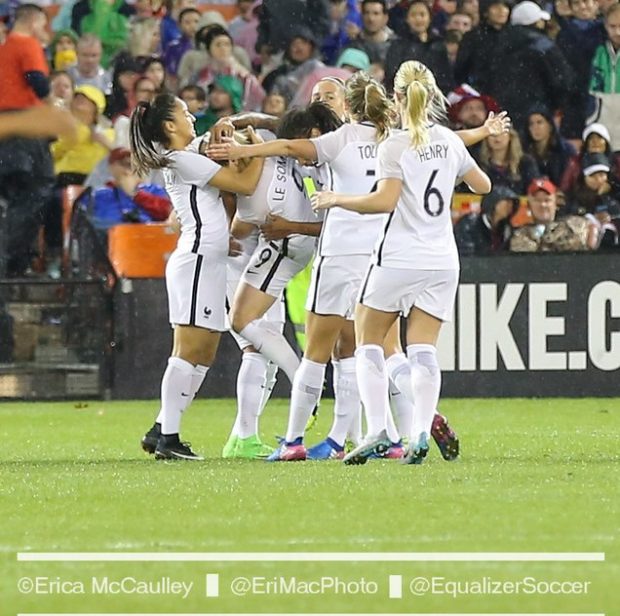 Eugenie Le Sommer is mobbed after giving France a 2-0 lead inside 10 minutes in the SheBelieves Cup match against the United Stattes. (photo copyright EriMac Photo for The Equalizer)

Olivier Echouafni, fresh off winning the SheBelieves Cup in his first tournament at the helm of France, named a 23-woman roster for an April 7 friendly against the Netherlands in Utrecht. The roster includes Thorns’ midfielder Amandine Henry plus former WPS standout Camille Abily.

A year after failing to score a single goal in the SheBelieves Cup, France authored an unbeaten run through this year’s tournament. It began with a come-from-behind, 2-1 win over England, then a fortuitous, scoreless to draw to Germany, and ended with an emphatic drubbing of the United States to claim the crown.

Lee: How the Red Stars won the NWSL off-season
Injured Morgan Brian out of USWNT camp