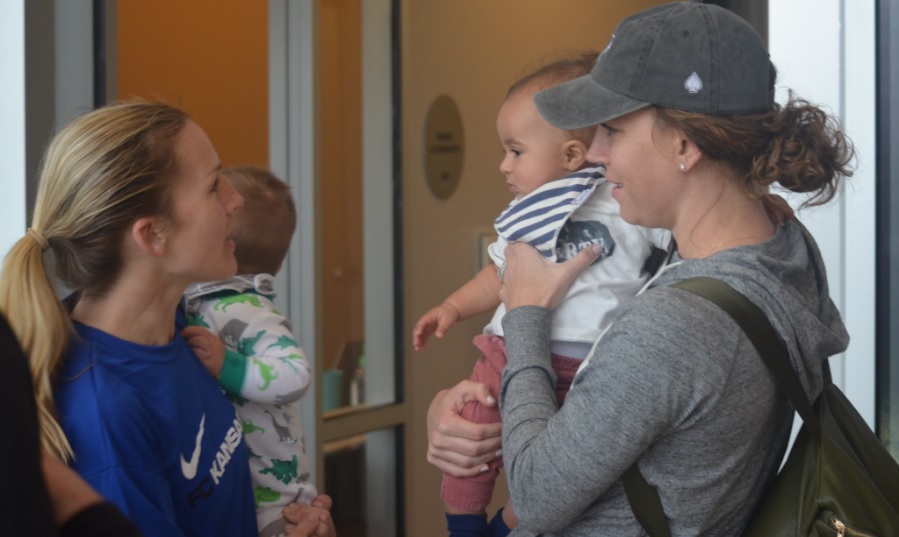 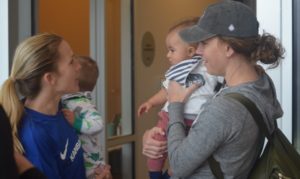 In September Holiday gave birth to her daughter and in October successfully underwent surgery to remove a benign brain tumor.

“I’m doing really well. I feel good,” Holiday in an interview released by the team. “I obviously still have some healing to do, but I feel good. I feel a lot more like myself than I did a month ago, so as long as there’s progress, I think that’s good.”

As for motherhood, Holiday said there is nothing better.

“It’s the greatest. Everyone says your whole life changes, and it really does. It doesn’t matter if you get three hours of sleep, you wake up happy with their smiling face,” she said. “She’s been such a bright spot with everything that has been going on in my life, so it’s been awesome.”

Holiday played with FCKC for three seasons, starting in all 48 appearances for the club and helping them win two consecutive NWSL Championships before retiring after the 2015 season. She retired from the USWNT shortly after their win of the 2015 Women’s World Cup after over eight years, 133 caps, 24 goals, two Olympic gold medals and a World Cup win.

So what about the question lingering in many fans’ minds: Will Holiday be coming out of retirement after her recovery?

“Maybe,” she laughed. “I think that I do miss the competitive aspect and I miss pushing myself, so I do work out and try to push myself that way.”

“Just having her around is inspirational. What a great person, everything that she went through,” he said. “She’s full of energy and enthusiasm and it’s nice to be around her, nice to have her around.”

The Holidays weren’t the only guests at practice today, as Sydney Leroux’s son Cassius and Amy Rodriguez’s son Luke were also visiting the preseason training session.

“It’s fun to have them around,” Andonovski said. “That’s the environment that we have. We’re family. The babies are part of the family.”

English international Lianne Sanderson was announced as the winner of Sports Personality of the Year at the inaugural DIVA Awards. The awards were hosted by DIVA magazine, a British magazine for LGBT women.

The winner of the #DIVA250 Sports Personality of the Year Award is… @liannesanderson! Congratulations! pic.twitter.com/J3XPGVhfdM

Sanderson is currently with the North Carolina Courage after being traded by the Orlando Pride to the Western New York Flash in June 2016. She played in just 9 matches for the club before tearing her ACL in a friendly against Thailand’s national team on Sept. 17. She missed the remainder of the Flash’s season, including the NWSL Final in which the team defeated the Washington Spirit in penalty kicks to win the league title. Prior to the Pride, Sanderson has played for the Portland Thorns in 2015 after spending two seasons in Boston.

Erin McLeod and Ella Masar McLeod have released their first official musical single, “Living Out That Dream.” The song, written by the two soccer players, features McLeod’s vocals accompanied by Masar McLeod on the piano. The single is the soundtrack for the documentary “Football I Nod Lust,” or “Football For Better and for Worst,” which aired in Sweden on Thursday and features the married couple.

"Living Out That Dream" Our 1st single- (@emasar3 and myself;)) The McLeod's from documentary "Fotboll I Nod Lust" airs march 23 on SVT2 pic.twitter.com/7URBUzuAf3

The McLeods are best known for their soccer, as the two currently play for FC Rosengård in the Damallsvenskan. Masar McLeod recently played a full 90 in Rosenård’s 1-0 Champions League loss to FC Barcelona, while McLeod remained on the bench as she continues recovering from an ACL tear. The couple made their way to Sweden by way of the Houston Dash, where they spent two seasons after spending 2013 with the Chicago Red Stars.

However, fans of the two are also familiar with their music since the couple have posted videos of their original compositions and covers to their social media accounts. The single can be purchased on iTunes and is available on Spotify.

Australian midfielder-defender Gema Simon has reportedly signed with Toppserien club Avaldsnes. Simon’s performance for the Matildas during the Algarve Cup garnered her the attention of the club as she helped Alen Stajcic’s side finish in a tournament-best fourth place.

Simon went into the tournament after a two-year absence from the national team and with only 5 caps under her belt. Despite her relative inexperience, she started in all three matches played in the tournament, splitting time between the midfield and the back line.

Simon most recently played for the Newcastle Jets in the Westfield W-League, where she has played all but one season since the team’s inception in 2008. She played for Melbourne Victory for the 2014/2015 season and played on loan with Suwon in South Korea’s WK League for the 2016 winter season. She also played for the Ottawa Fury in the USL W-League back in 2013 but suffered an injury that saw her miss her last two months with the club.

A look inside the start of year ✌️. More behind the scenes coverage coming soon to LionNation. #FillTheBowl

The Orlando Pride released a video giving fans an inside look at the club’s preseason training. The eight-and-a-half-minute video gives fans a glimpse of what training with an NWSL club is like, including footage of the dreaded beep test, and features interviews with Maddy Evans, Jasmyne Spencer and Dani Weatherholt discussing team’s preparations for its second season.

“There’s definitely a different energy in the air. Everyone was really excited to come back and get to work,” Weatherholt said. “There was definitely instant cohesion and chemistry. We already had that foundation that we had built from last year.”

The video is the first of two preseason videos the club will put out, the second of which will be released later exclusively through Lion Nation, the team’s subscription-based online program.