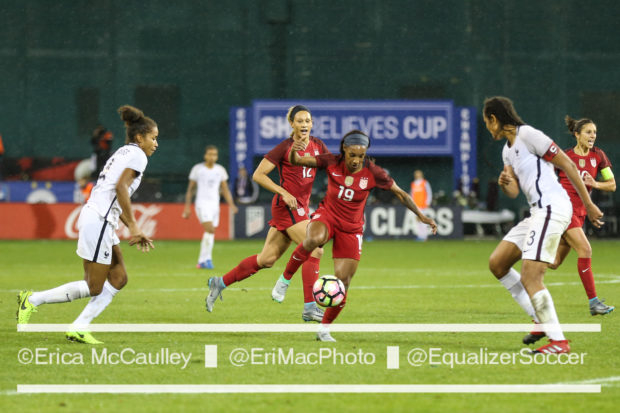 United States coach Jill Ellis has named 24 women to go to camp ahead of April 6 (Frisco) and 9 (Houston) friendlies against Russia. Nineteen of the 24 players were part of the SheBelieves Cup team that finished last in the four-team competition. Among the new faces is Megan Oyster, receiving her first senior call-up, and Megan Rapinoe, who has had a very up and down last several months with the national team. The game day roster for each match will be 18 players.

“This is our last chance to get together before the NWSL starts and we’ll take full advantage of the training time as well as the two matches against a team in preparation for the European championships,” Ellis said. “Following these matches, my staff and I will begin a heavy investment in attending and evaluating the NWSL games as well as tracking our players overseas before we get back together for our European trip in the summer. I’m very much looking forward to our domestic league starting.”

Rapinoe was fast tracked in her recovery from 2015 ACL surgery in order to play on the 2016 Olympic team but has been in and out of the side since them amid protests during which she knelt during the national anthem. U.S. Soccer recently created a new policy legislating all players and staff stand during national anthems. After that Rapinoe released a statement saying she would abide by the policy. Ellis told ESPN’s Julie Foudy that Rapinoe was left off the SheBelieves camp roster because she was still working on her fitness.

The Oyster call-up comes as a surprise after the center back fell out of favor in Washington toward the end of 2016. She was traded to the Breakers during the offseason and is expected to anchor the back line in Bean Town this season. Oyster did finish her Spirit career on a high note playing as the right-sided back in a 3-5-2 formation in the NWSL Championship that was similar to the alignment Ellis is trying to implement with the U.S. There is also a hole in the middle with Emily Sonnett being dropped and Julie Johnston not available for this camp because she is getting married. She will return from her honeymoon as Julie Ertz.

Meghan Klingenberg and Amy Rodriguez, both of whom were in SheBelieves camp but did not make the roster, have also been called in. Kealia Ohai, last seen at the January camp, is on her way to Texas as well.

Other players from SheBelieves not named this week by Ellis are Brianna Pinto and Jessica McDonald.

The full cam roster is: