The Lowdown: Three units that could make or break NWSL seasons 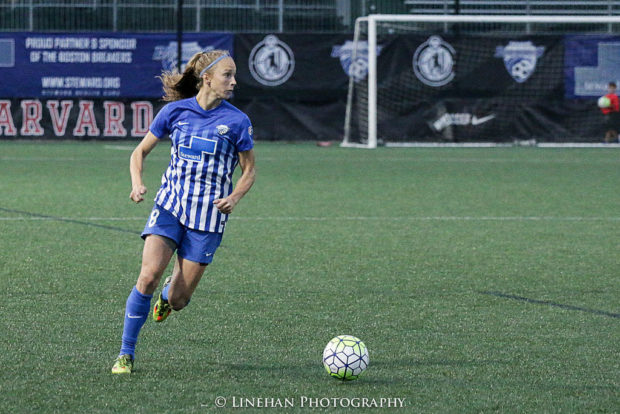 By our projected linedup, Julie King will be the only returning Breaker starting on the back line (photo copyright Linehan Photography for The Equalizer)

Matt Beard pretty much redid his entire roster during the winter, doing everything from bringing in internationals Emilie Haavi and Rosie White to four of the first nine college draft picks. There is little doubt the 2017 Breakers will be more exciting than any of their previous NWSL counterparts. But that won’t translate into many wins if the back line does not hold up.

We haven’t seen the Breakers play yet, but most of us seem to think Megan Oyster and Amanda Frisbie will be centering Julie King and Allysha Chapman. King is the club’s (NWSL era) all-time leader in games and minutes, but the other three are all new additions. All four are very good players, but none have ever anchored a back line before at the professional level.

{RELATED: Check out the weekend results from NWSL preseason action}

Oyster looks to be the key and the likely leader but hers is a cautionary tale. Drafted No. 13 overall by the Washington Spirit in 2015, Oyster started the first 34 games of her pro career, playing the full 90 minutes in all but one of them. Her last game before the Olympic break was a bit of a howler and she was benched on the other side, playing just once more the rest of the regular season. Oyster’s final appearance for the Spirit was a sterling performance in the NWSL Championship when she was plugged in to the right side of a three-back.

If the Breakers can figure out how to get the Megan Oyster who looked to be on the fast track to a call-up, that will go a long way toward a stable back four. But even if they do, everyone else is going to need a strong season to make the group work well enough to turn the Breakers into playoff contenders.

The Courage made some interesting offseason additions including the Brazilian duo Rosana and Debinha. With Lynn Williams and Jessica McDonald pretty much penciled in to start up top and Makenzy Doniak being an effective third and/or wide midfielder, it didn’t seem like there was much room for the Brazilians to slot in. That said, anyone who watched Debinha carve up opponents during the Olympics last summer has to be intrigued at what she and Sam Mewis can do over the course of two dozen games.

There could be a bigger issue though. Back to that NWSL Championship three-back deployed by the Spirit for a moment, is it possible that Jim Gabarra unlocked the keys to slowing down Williams and McDonald? By crowding the midfield, the Spirit more or less isolated the two strikers and choked off service. Of course it’s one thing to do that over 90 or 120 minutes, and something entirely different to do it across an entire season. Beyond that, Paul Riley is among the most tactically flexible coaches around so adjustments would come.

The bigger picture is that if the Courage midfield plays well this season, the club is going to be mighty difficult to beat. Alanna Kennedy was traded to Orlando which could leave Mewis playing an even deeper, creative role where she could pull the strings for the entire attack. The talent is there for this midfield to be dynamic and if it all works, watch out NWSL.

I hesitated before including this unit because the Reign are exiting a bizarrely subpar season, and I think there are little flaws up and down the field that need to be corrected. But their midfield will be a talking point for fans this season so let’s take a look.

Jess Fishlock is back in Seattle, but her two midfield partners have moved on. (Photo Copyright Patricia Giobetti for The Equalizer)

When Keelin Winters retired and Kim Little returned to England, Laura Harvey was left with only Jessica Fishlock from the dynamic, three-woman midfield that helped the Reign win consecutive Shields in 2014 and 2015. To replace them she pounced on player discontent in Washington and in two separate trades, acquired Christine Nairn and Diana Matheson from the Spirit. That was probably a slight downgrade but pilfering two pieces of the team that played the most attractive soccer in NWSL last season was not a bad place to go as far as replacing Winters and Little. That is at least until Matheson tore her ACL training with Canada.

So what will Harvey do now with the midfield? Rumi Utsugi, who played mostly in back last season, is an option as is Megan Rapinoe. Lindsay Elston was mostly used as a late sub last season. Veteran Kiersten Dallstream is a jack-of-all-trades type, but neither she nor Elston are likely who you want to rely on to be a regular in the center of the midfield. There is also the possibility for a trade or, down the line, a summer transfer. Elli Reed and Carson Pickett are options as well but probably not in a 4-3-3.

The reality is that Little offered some of the most unique qualities of any player in the world and will be virtually impossible to replace. And maybe with her out of the picture Harvey will change up the entire system. Fishlock is a great engine who covers massive space over the course of 90 minutes. One way or another she’ll be the likely focal point of the midfield. But it remains to be seen if the Reign have the personnel to put around Fishlock to make the midfield viable enough for a return trip up the standings ladder.