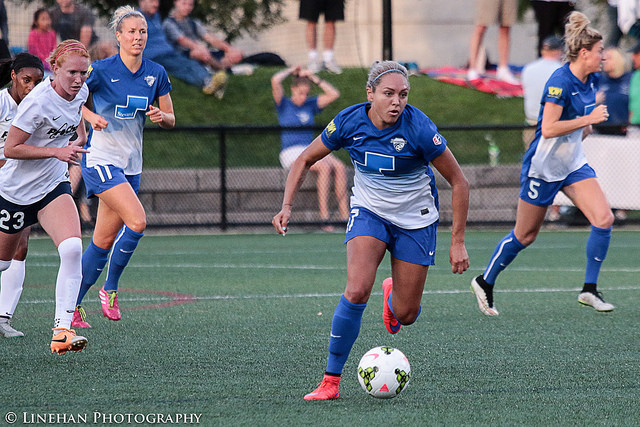 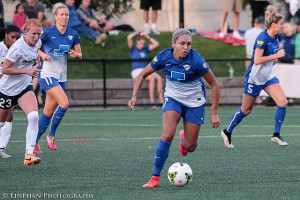 Kyah Simon is sitting out the 2017 NWSL season to undergo double shoulder surgery. (Photo Copyright Clark Linehan for The Equalizer)

Kyah Simon will be undergoing shoulder surgery today, per posts to the Australian international’s social media accounts.  The forward said that between her two shoulders, she has suffered approximately 25 dislocations over the past decade, and the surgery is to fix those problems. Today’s surgery is to repair the right side, with surgery to repair the left sometime in the future.

A little bit nervous for surgery this morning, but excited to have a new shoulder. See ya in a few hours ??✌?#ShoulderSurgery pic.twitter.com/fGBp7dFI56

According to other posts to Simon’s Twitter, she will be sidelined between 5-6 months as she completes recovery and rehab. Two months ago Simon announced she would not be returning to the Boston Breakers in 2017 although her reason was somewhat ambiguous.  At the time she did not mention surgery but did cite a need to get her “mind and body back to 100 percent health and fitness.” This will be the second NWSL season Simon has missed, as she also sat out the 2014 season after tearing her ACL.

Simon seems to have put off the surgeries until after the Australian women’s national team was done competing in the 2017 Algarve Cup, which the Matildas finished fourth in for their highest tournament finish in team history. Simon scored for the Matildas in the third-place match, but the Aussies eventually fell to Denmark in penalties.

“As we continue to grow as a brand and an organization, working towards our goal of providing the highest level of men’s and women’s professional soccer in North Carolina, we feel that our core values align with these great organizations and we look forward to long and fruitful partnerships,” North Carolina FC President and General Manager Curt Johnson said.

Owner Steve Malik took it a step further, telling guests at the luncheon that his goal was “global domination” and for the Courage to become the best women’s team in the world. “I’m not kidding.”

It was also announced at the luncheon that Malik was recently named to the U.S. Soccer Board of Directors, the governing body of USSF. Malik will serve as Pro Council Representative alongside MLS Commissioner Don Garber.

Nadia Nadim was named the 2016 Spencer Stuart Female Footballer of the Year by the Dansk Boldspil-Union, the Danish football union. The award was van-voted.

Nadim was nominated for the award for her performance for both club and country. She has 63 caps and 17 goals for Denmark, including 5 goals in 4 games as Denmark qualified for the 2017 EUROs.

In her one season with the Portland Thorns, Nadim started in all 20 matches played and led the team in goals (10), points (23) and shots (40). She was instrumental in the Thorns winning the 2016 Shield and advancing to the semifinals. She tore her LCL in the Thorns’ semifinal loss and has spent the offseason recovering from surgery and rehabbing her knee. Before that she spent parts of two seasons with Sky Blue FC.

The forward was unable to accept the award in person as she is currently with the Thorns in preseason camp.

Princeton University women’s soccer team recently announced the addition of former Boston Breakers goalkeeper Jami Kranich to their coaching staff. Kranich joins the ranks as an assistant coach and will be working with the team’s goalkeepers.

“Jami will bring tremendous experience from the college, national and professional level to our goalkeepers,” Sean Driscoll, head coach, said. “She is chomping at the bit to get going and I cannot wait to get her involved with our program.”

Kranich spent three years with the Boston Breakers after being drafted in the 4th round in 2014. Serving as backup keeper to Alyssa Naeher, Kranich did not make her professional debut until May 9, 2015 while Naeher was away with the USWNT, and she earned her first professional clean sheet just a week later. Over three seasons, Kranich started in all 17 matches played, allowing 33 goals.

The keeper came to Boston after an impressive collegiate career at Villanova, where she was a four-year starter. She played in 65 matches for the Wildcats, registering 266 saves and 12 shutouts while allowing 101 goals. She missed a number of matches her junior year to compete with the U.S. in the 2012 FIFA U-20 Women’s World Cup, which the U.S. won after defeating the defending champion Germany, 1-0. Despite that absence, Kranich still received All-Big East honors. 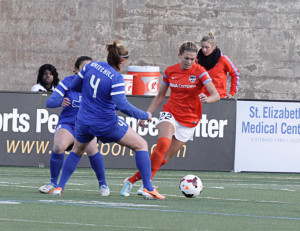 The Technical Institute, an advanced soccer education group based out of Houston, announced today it had hired Houston Dash’s Stephanie Ochs to its coaching staff ahead of its inaugural WPSL season.

Ochs has been with the Dash since 2014 and in her three seasons with the club has started in 24 of 39 matches played and recorded 4 assists. She came to the Dash after playing for a season with the Washington Spirit, who took her as the first overall pick in the 2013 NWSL Supplemental Draft. She was originally taken as the no. 3 overall draft in the 2012 Women’s Professional Soccer (WPS) draft by the Boston Breakers, but never suited up as the WPS folded shortly thereafter. Instead she played for the Western New York Flash in the WPSL Elite, helping them earn their third league championship.

The team announced in February that former Dash goalkeeper Haley Carter had signed on as a player/coach, and former Dash midfielder Jordan Jackson has also signed on to play.

The WPSL season runs from May to the end of July.