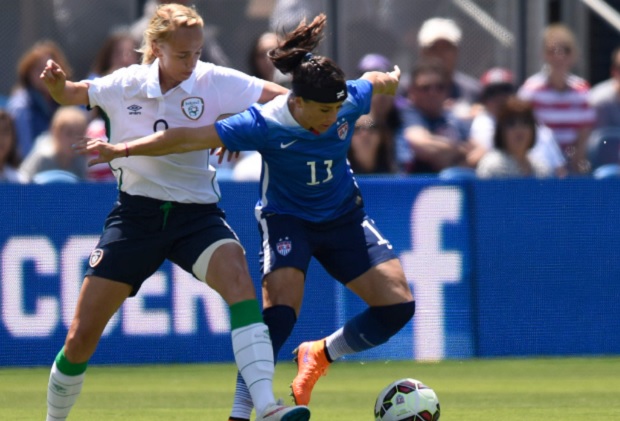 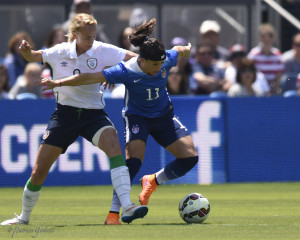 Ireland WNT is yet another team facing unfair compensation and training conditions. (Photo Copyright Patricia Giobetti for The Equalizer)

Women’s professional and international soccer teams are increasingly making headlines as more and more players come forward to speak out against unequal or unfair pay and compensation. The USWNT is still embroiled in their “Equal Play Equal Pay” fight, New Zealand captain Abby Erceg retired from international competition as a result of unfair compensation and poor training conditions for the team and the Nigerian Super Falcons staged a sit-in in response to lack of payment of reward money for winning the 2016 Women’s Africa Cup of Nations.

Today Emma Bryne, captain of Ireland’s women’s national team, spoke out about the lack of compensation the players receive and the effects it’s having on the team’s progress. In an interview with FIFPro.org, Byrne said that the team receives no compensation whatsoever, despite spending as many as 40 days a year training and competing with the team. Because of this lack of payment, most of the players have full-time jobs outside of soccer, but many have to miss work for national team duty. Those that can’t miss work miss out on team events.

“We get no reimbursements, so players either have to take holiday pay, holiday leave, leave without pay [to fulfill national team duty],” Byrne said. “For players who have mortgages, bills and general expenses, it’s really difficult for them.”

Byrne also said that the team’s lack of compensation is causing the team to fall behind its neighbors, England and Scotland. Both of those teams have qualified for the 2017 UEFA Euros, while Ireland has yet to qualify for a major tournament.

“We’re falling even further behind the home nations which I think is a major problem,” Byrne said. “Sometimes we don’t have full squads for the games because people are working and they can’t commit.”

The Professional Footballers of Ireland, the Irish players union, is currently working with and advising Byrne and her teammates in regards to their playing conditions. 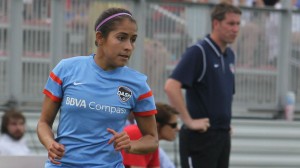 Ari Romero has signed with Valerenga of the Norwegian Toppserien.(Photo Copyright Erica McCaulley for The Equalizer)

Mexican international Ari Romero is joining Norwegian side Valarenga, along with a bunch of other ex-NWSL players.

Romero has been a part of three different NWSL clubs despite only playing in the league one season. A member of the Mexican women’s national team, she was originally allocated to the Seattle Reign in the 2014 NWSL Player Allocation before being selected by the Dash in their expansion draft. She made 19 starts in 21 matches for the club but was traded to the Washington Spirit during the offseason in exchange for Niki Cross. However, Romero never made an appearance for the Spirit and later signed with IBV in Iceland. The Reign picked up her rights in the 2016 Distribution Draft to no avail.

Most recently, Romero played with Perth Glory of the Westfield W-League, helping the club advance to the league’s Grand Final for only the second time in club history. Glory dropped the match, 2-0, and Melbourne City repeated as league champs.

?? | Patrizia #Panico will be the first woman to coach a #Italy men's team when she leads the #Under16s vs. Germany.https://t.co/zoSg3lWFg9 pic.twitter.com/hFFa55kXNK

For the first time in Italian soccer history, a woman will be coaching a men’s national team. Patrizia Panico has been appointed head coach of Italy’s U-16 men’s team for two friendlies against Germany.

Panico is an Italian soccer legend in her own right, making 204 appearances and scoring 110 goals for the team. She has also been inducted into the Italian Football Hall of Fame. During her playing career, she played for Italian clubs including Lazio, Milan, Torino and Verona, and the forward played for Sky Blue FC in 2010 in Women’s Professional Soccer. American soccer fans may remember Panico best for breaking Boston Breakers Leslie Osbourne’s collarbone after tackling the midfielder from behind.

The news of Panico’s appointment comes just weeks after Chan Yuen-ting became the first woman to coach in the AFC Champions League when her club, Eastern, took on Guangzhou Evergrande.

The two friendlies coached by Panico will take place on March 22 and March 24 in Verona and Caldiero Terme.

Few things go together like WoSo and dogs. The Washington Spirit have an unofficial mascot, Boyd, whose job is to keep geese and other wildlife off the fields of the Maryland SoccerPlex. After Christen Press missed her penalty kick in the Olympic quarterfinals, a #dogsforchristen campaign was launched on social media to console the USWNT forward. Sydney Leroux’s chihuahua Boss and Rose Lavelle’s bulldog Wilma even have their own social media accounts.

Now WoSo and dogs meet once again, thanks to the Orlando Pride and the Pet Alliance of Greater Orlando. According to the alliance’s social media accounts, two of the Pride’s players, Kristen Edmonds and Jasmyne Spencer, are fostering four puppies for the next few weeks.

Kristen Edmonds and Jasmyne Spencer of the @ORLPride Soccer Team are fostering four of our under age puppies for a few weeks. Thank you! pic.twitter.com/3QVkBfO5tj

In other NWSL news, Morgan Brian of the Houston Dash is reportedly sitting out of preseason practice because of a mild injury. The midfielder reportedly “tweaked” her MCL in the USWNT’s 3-0 loss to France in the final match of the SheBelieves Cup. Although she is said to be healthy enough to practice, head coach Randy Waldrum said Brian is being sidelined as a precautionary measure. Last year, Brian was hampered with a hamstring injury for the first half of the Dash’s season and missed the USWNT’s friendlies against Colombia in April as a result.