Three NWSL stars–Carli Lloyd, Heather O’Reilly and Crystal Dunn–made international headlines over the past couple of months after forgoing at least part of the 2017 NWSL season to sign with FA WSL clubs. Now, these expatriates face big challenges with their new clubs as all three may be making their competitive debuts in the SSE Women’s FA Cup this weekend.

Lloyd only recently joined Manchester City Women, participating in her first training session with the club on Tuesday. Despite joining the team so close to its March 18 fixture against Reading FC in the 5th Round of the FA Cup, Lloyd could very well start in her FA WSL debut this weekend. At the very least, fans will likely see Lloyd take the field for City, even if only as a second-half substitute.

On Sunday, March 19, both Arsenal Ladies and Chelsea Ladies compete in their own 5th Round matches. Heather O’Reilly and Arsenal will be taking on Tottenham Hotspur Ladies, while Dunn and Chelsea Ladies will face the Doncaster Rovers Belles. Both O’Reilly and Dunn have not only been training with their clubs for a while now, but have taken the field for their teams in exhibition matches. O’Reilly played for Arsenal against an all-star team in Kelly Smith’s farewell match, while Dunn has appeared in multiple preseason matches for Chelsea. Dunn even scored her first goal in a 2-0 win over Fortuna Hjorring at the end of the team’s preseason training camp back in February. 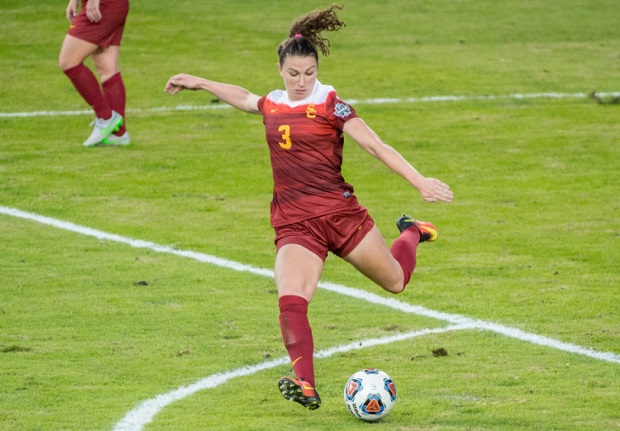 The Boston Breakers announced today that they had officially signed midfielder Morgan Andrews ahead of the 2017 season. Andrews was selected by the Breakers as the No. 3 overall pick in the 2017 NWSL College Draft, the Breakers’ second pick of the draft.

Andrews is coming to Boston off quite an impressive collegiate career. In December Andrews won the College Cup Final with the USC Trojans, opening up scoring just minutes into the contest and assisting on the championship-winning goal in a 3-1 win over the no. 1-ranked West Virginia Mountaineers. Her goal, her 10th for the season, is the fastest goal ever scored in a College Cup Final. She was also named a finalist for the 2016 MAC Hermann Trophy, the most prestigious award in college soccer.

In two season at USC, Andrews scored 22 goals and registered 8 assists in 47 matches played. She also earned consecutive All-Pac-12 First Team honors in her two years as a Trojan. Prior to transferring to USC, Andrews played at Notre Dame, where she recorded 13 goals and 10 assists.

Most recently, Andrews competed with the U.S. U-23 women’s national team in a three-game series in La Manga, Spain. She helped the team leave Spain with a 2-1 record, scoring the game-winning goal in the team’s 2-1 win over Norway in their final match of the series.

The Breakers signed the No. 1 overall draft pick, Rose Lavelle, on Feb. 27.

.@nadia_nadim is up for Denmark Women's Player of the Year. Have you voted yet? No? Do it.

Nadia Nadim in one of four women nominated for the Denmark Women’s Player of the Year award. The award is presented by the Dansk Boldspil-Union, the Danish soccer union, and is the top award for women soccer players in the country.

Nadim is nominated for the award both for her contributions on the Denmark women’s national team, but also in the NWSL with the Portland Thorns. The forward started in all 20 matches played for the Thorns, leading the team in goals scored (10), points (23) and shots (40). Her play helped her club win the 2016 Shield before falling to the Western New York Flash in the semifinals. Nadim also tore her lateral collateral ligament (LCL) in that match, resulting in offseason surgery.

Also nominated for the award are Pernille Harder, Janni Jjalbert and former-Seattle Reign FC midfielder Katrine Veje. The award will be presented at the Danish Football Awards on Monday, March 20. Fans who want to vote may do so by clicking on the link in the tweet above.