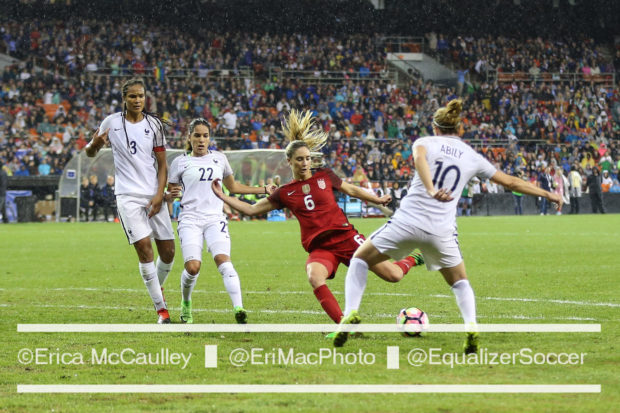 WASHINGTON D.C. — You don’t have to step foot inside of present day RFK Stadium to understand of what’s become of the 57-year old sports venue. The discoloration and rust that dominate the outer shell of the stadium give way to even more severe signs of neglect and aging inside.

Between the faded and broken seats, chunks of concrete patrons can collect like souvenirs, the wildlife that have taken up residence, and stands that undulate entirely too much for comfort, it’s easy to see that RFK is well past its prime. Even an elevator ride to the press box isn’t immune as the ride sounds something like a garbage disposal choking on the remnants of a five course meal.

After years of frustration, ground finally broke last month on D.C. United’s new stadium. Although it’s not certain, many would wager that last week’s 3-0 loss to France will be the last time the United States women’s national team plays in the building.

While most say good riddance to the stadium, nostalgia calls for a quick pause. Among the neglected concrete and metal lie some important moments in women’s soccer history. From Olympics to World Cups and even the professional game, RFK holds memories.

It’s here that the highest attended professional women’s soccer game was held sixteen years ago when over 34,000 people filled the stands to watch the Washington Freedom take on the Bay Area CyberRays in WUSA’s Inaugural Game.

RFK holds this distinction not only because of the popularity of the sport in the area but also because the stadium is a throwback to the era of one-size-fits-all venues. The multi-use stadium approach gave way to sport specific stadiums, ironically making it more difficult to break the record, despite the sport’s increasing popularity. Thus, in some ways we’re stuck with RFK for the foreseeable future, at least in the history books.

For several people who graced the field or sidelines last Tuesday, the stadium holds special personal significance. After the first game in the doubleheader, Germany coach Steffi Jones reminisced about her days as a Washington Freedom player.

“I remember so many great, great games here, the great fans and so I was feeling good coming back,” Jones said after Germany earned its only win in the tournament.  “I know that there’s going to be a new stadium coming so me being in here one more time is a good, good feeling.”

For another player 20 years Jones’s junior, RFK stadium is also special. In just her second cap with the U.S. back in September 2013, Virginia alum Morgan Brian scored her first goal with the full team with her University of Virginia teammates in the stands. Sixty-four international caps later, that moment is fresh in her mind.

“I remember them all coming to the game and they had drums and they were crazy…It is a special place for me, and it’s something I’ll always remember for the rest of my career is having my teammates from UVA there and being able to celebrate with them and score my first goal ever.”

Like many from the D.C. area, U.S. defender Ali Krieger has a story to tell that involves RFK Stadium. Unlike most, however, the right back has memories as both a fan as well as participant.

“I watched Holland play here and that was always etched in my memory as a young kid, really, really young,” the Northern Virginia native said of RFK. “Also just playing one of my first career professional experiences with the Freedom back before I think it was even in the W-League (with the Freedom) when I was like 18 years old.

“It’s going to be awesome to see the soccer specific stadium for D.C. United that hopefully the women can also play in eventually but this stadium is monumental from World Cups to my personal professional experiences here in the W-League.”

While D.C. area soccer fans looks forward to making new memories Audi Field, they’ll certain take their memories of RFK with them. Some of them would surely quip, it’s the only thing worth keeping.