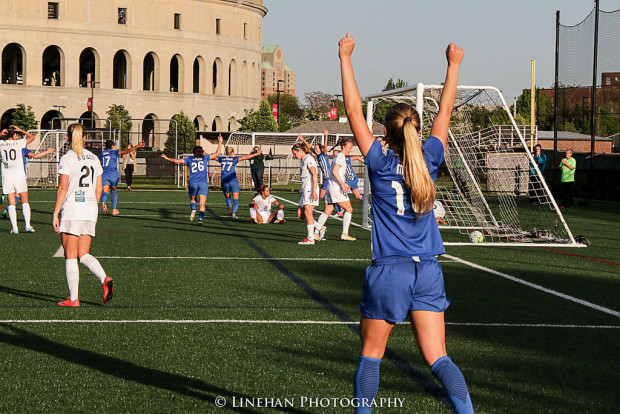 Also in today’s roundup, the Red Stars get snowed out, Alex Morgan bags a hat trick, Tine Schyvers is out of the Euro’s for Belgium plus sites and sounds from around NWSL preseason

Paul McHugh is the newest addition to the Breakers coaching staff. Cat Whitehill will not be on the staff this season. (photo copyright Linehan Photography for The Equalizer)

The Boston Breakers completed their coaching staff on Tuesday by naming Paul McHugh as assistant coach under Matt Beard. McHugh will join Beard and goalkeeper coach Neill Caine. Former Breakers player Cat Whitehill, who served as an assistant in 2016, is no longer with the organization in any official capacity.

McHugh, a native of Newcastle, brings a wealth of global coaching experience to Boston. He has served on the coaching staffs for Minneapolis United, East Durham Football Academy, Sunderland AFC Academy, Newcastle United Football Academy and in the Peru National Team youth system.

“It’s great to have him on board. He has a wealth of experience, working at Newcastle United Football Club and also as a coach educator in England, spanning more than 20 years,” Beard said. “He also has a great personality, which I feel will enable us to work well together and create a good balance with the team.”

The task in Boston is to raise the Breakers off the bottom of the table, where they have resided the last two seasons. They are the only original NWSL club yet to reach the postseason. Beard overhauled the roster over the winter including a series of trades that gave him four 1st round picks. Rose Lavelle, the first overall pick from Wisconsin, recently made her debut with the senior U.S. national team.

The heavy snow that has hit much of the country this week has taken its toll on the Chicago Red Stars preseason schedule. The club announced on Tuesday that the preseason match against the University of Wisconsin scheduled for Thursday has been cancelled.

we had to cancel the game in Madison ? pic.twitter.com/N0wc4vUubR

The Red Stars will now open preseason play at the Thorns tournament in Portland. They open March 26 against the Thorns and later play the Dash and the U-23 national team.

Sunday in France, Alex Morgan scored her first goal since joining Lyon and then added two more for the hat trick. Morgan’s contributions accounted for half of Lyon’s goals in a 6-0 French Cup thrashing of Rodez. The win put Lyon into the semifinals where they will face second division Henin-Beaumont away on Easter Sunday. For Morgan it was also her first 90-minute outing of 2017.

Lyon’s chief rival Paris Saint-Germain is through to the other semi but not without some drama as they required penalties to vanquish Juvist after a 1-1 draw. PSG are home for the semifinal against Saint-Etienne. Lyon are looking for their sixth consecutive French Cup. The last team beside Lyon to win the event was Saint-Etienne.

In league play, Lyon lead PSG by 4 points with seven matches to play. Morgan could see more action Saturday away to ASPTT Albi.

Morgan is expected back in the United States and with Orlando Pride by the end of June.

Tine Schryvers announced via her Twitter account on Tuesday that she will miss the European Championships for Belgium this summer. The striker tweeted a picture of herself in a hospital bed with the lower part of her right leg wrapped in a cast. She will also miss the start of the Swedish season. Schryvers plays for Kristianstads DFF. The news came down on Saturday, Schryvers’s 24th birthday.

With pain in my heart, I announce I wont make @WomensEuro2017 With @BelRedFlames /will miss the start of the season @KDFF1998 ?#comeback ?⚽ pic.twitter.com/YLL9jMl08y

Tine Schryvers is a name that should be familiar to ardent fans of the college game. She played most of her college career at the University of Tulsa. For Belgium she has made a mark in limited time. Schryvers earned her first cap in the 2016 Algarve Cup and bagged her first goal in the 5th place match, which the Red Flames won 5-0 against Russia. At year end she had made 7 appearances and scored 3 goals.

Belgium, without Schryvers, will play in Group A in the Euros. They are drawn against Norway, Denmark and the host Netherlands.

Sites and sounds from NWSL preseason

Excited for my 1st Training session today with the Dash after having to comple my physicals. Love my new team already ❤⚽ #DashOn pic.twitter.com/p7udD0LUAo