Also in today’s roundup, Amandine Henry is on her way back to Portland, Libby Stout will miss up to six weeks, the Courage name initial preseason roster, Sky Blue announced preseason schedule, and Hannah Wilkinson is on her way to Sweden 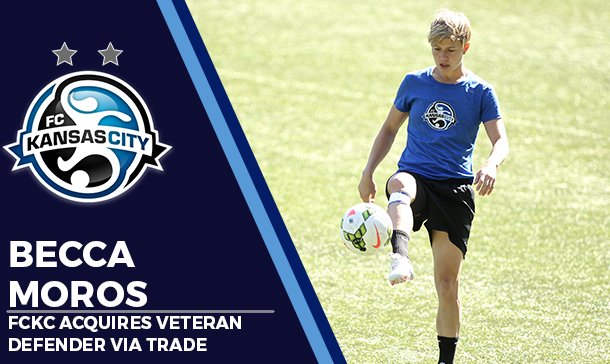 Rebecca Moros is heading back to Kansas City after spending 2016 with the Houston Dash.

“The knowledge and experience that Becca brings will be vital for us in achieving our goals for next season,” FC Kansas City head coach Vlatko Andonovski said. “She is a great player with great understanding of the game and can adjust to any style, system and philosophy very fast.”

This season will be Moros’s second in Kansas City. She started all 20 regular season games as an outside back in 2015 plus two playoff matches and helped the Blues repeat as NWSL champions. The year before with the Thorns, her season ended at the hands of FC Kansas City in a 2-0 loss in the semifinals. Moros spent last season in Houston. She is also a WPS champion having been on the Western New York Flash when they won the title in 2011.

“Becca will do well in Kansas City and we wish her the best moving forward,” Dash coach Randy Waldrum said. “She’ll bring a lot of experience and stability to Kansas City as they try to return to the playoffs.”

In three NWSL seasons Moros has 55 appearances, 50 of them starts, and has 4 assists.

Amandine Henry will return to the United States for Portland Thorns preseason and will not play in the Champions League quarterfinal for Paris Saint-Germain.

Amandine Henry has been recalled by the Portland Thorns and will not play for PSG in their upcoming @UWCL games. https://t.co/K320KZyhh7

After recovering from an offseason injury, Henry joined PSG on loan, raising questions as to whether she would start the season in Portland. Paris Saint-Germain will face Bayern Munich in the last eight of the Champions League. That tie opens March 23 in Germany.

Henry recently helped France win the SheBelieves Cup, which they stamped by thrashing the United States 3-0 on Tuesday. After one of the few dodgy moments for the French defense, Henry slipped behind keeper Merine Gerard and calmly cleared a ball off the goal line to keep the score 2-0.

After joining the Thorns last summer, Henry started in eight of her 9 appearances. She totaled a single assist over 638 minutes.

Libby Stout’s 2017 season is off to a rocky start. The Breakers keeper has a sprained ankle that will keep her off the field up to six weeks. (photo copyright Linehan Photography for The Equalizer)

Boston Breakers goalkeeper Libby Stout has a sprained ankle and will be sidelined 4 to 6 weeks. The time frame essentially rules out Stout for preseason and puts her participation for opening day in question.

“I’m obviously disappointed for Libby with this happening right before preseason,” Breakers coach Matt Beard said. “She worked hard to come back from injury last year. I’m confident that she’ll be back stronger than ever.”

Stout began last season as the Breakers’ starter but suffered a hamstring injury that dogged her the rest of the season. She wound up making 10 appearances (9 starts), going 1-7-2 with a 2.18 goals against. Missing preseason will give a leg up on the starting role to Abby Smith who is on the mend after patella surgery. The highly thought of Smith was in her second professional match last season when her knee gave way, costing her the rest of the season.

The North Carolina Courage have announced their first preseason roster ahead of the opening of training camp on Monday. The team that won last year’s NWSL Championship as the Western New York Flash was sold and relocated to North Carolina earlier this year.

The roster, as released by the club, is listed below and is subject to change.

The group includes three key additions. Brazilians Debinha and Rosana were added as transfers over the offseason and Sam Witteman was acquired from the Orlando Pride in a trade for Alanna Kennedy. It does not include Lianne Sanderson who tore her ACL late last season.

The announced roster contains 23 names. NWSL clubs are permitted to carry a maximum of 32 during the first part of preseason. 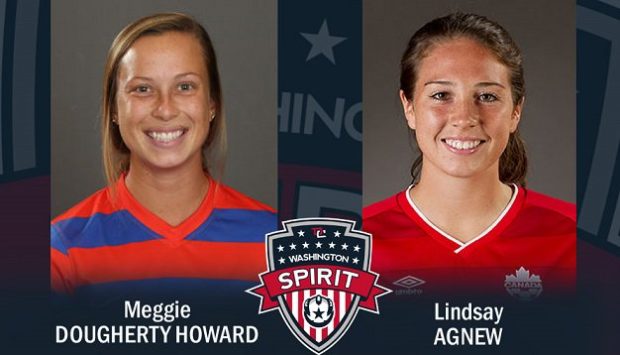 The Washington Spirit shored up their roster for the season by inking six veteran players to contracts as well as draft picks Lindsay Agnew and Meggie Dougherty Howard. The six returning players signed are Cali Farquharson, Estelle Johnson, Joanna Lohman, Alyssa Kleiner, Kristie Mewis and Cheyna Williams. Mewis is returning to the league but is new to the Spirit after being acquired from the Breakers. Farquharson is not likely to be ready for opening day after tearing her ACL in September.

“We are very happy to have signed these quality players to new contracts,” general manager and head coach Jim Gabarra said. “We expect healthy competition at all positions, and we are excited to see all of our team here at the SoccerPlex.”

{THE LOWDOWN: A weekend at the PRO Referee camp}

The announcement of player signings should be welcome news for Spirit fans, who have endured a tumultuous offseasn during which many popular players have departed. The club came within seconds of winning the NWSL Championship last season but many of the main contributors are now elsewhere.

Agnew, the 19th pick out of Ohio State, recently made her first two appearances for Canada. Doughtery Howard, from Florida, was the 29th player selected.

“Lindsay has great talent and potential,” Gabarra said. “With her recent call ups to National Team camp and to the Algarve Cup, she has created good positive momentum with Canada heading into preseason, and we look forward to having her join us.

“Meggie gained tremendous experience with our club last summer. She fit in immediately, and we feel fortunate that we could draft and sign her.”

Sky Blue FC have announced their 2017 preseason schedule. The New Jersey based club will play three matches in the buildup to the season. Sky Blue will be in New York on March 25 to take on St. John’s University. They will then do battle with the University of North Carolina on April 1 and Penn State on April 9. The Breakers previously announced a closed-door match against Sky Blue on April 4; however, the Sky Blue release did not mention that match.

“We are really looking forward to getting started with our preseason schedule,” head coach Christy Holly said. “This year, we will play an exceptional set of teams that present us with an array of challenges. Putting our players in this competitive environment will ultimately allow us to enter the NWSL season fully prepared so we can give our fans an exciting year.”

The match against St. John’s will mark the fifth consecutive year Sky Blue will play the Red Storm in preseason.

New Zealand international and former Tennessee star Hannah Wilkinson has joined Swedish side Vittsjö. At 24, Wilkinson recently completed an injury-plagued college career at the University of Tennessee and was not selected in January’s NWSL draft.

On the international scene Wilkinson has scored 24 times for New Zealand and has managed to be healthy enough to play for the Football Ferns in the last two World Cups and last two Olympics. She was recently part of the side that dropped all three group matches at the Cyprus Cup before ending with a 3-1 win over Hungary to secure 9th place.