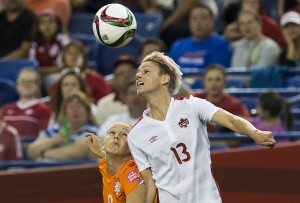 Sophie Schmidt suffered a facial fracture during the Algarve Cup, sidelining her for the next four weeks. (Getty Images)

Canada women’s national team midfielder Sophie Schmidt will miss four weeks with 1. FFC Frankfurt of the Bundesliga after suffering a malar fraction during the Algarve Cup. Schmidt was injured during Canada’s group stage match against Russia, which the team won 2-1. Schmidt opened up the scoring in that match, beating Russia’s goalkeeper to a loose ball in the goal box and volleying it into the back of the net in just the 10th minute.

A collision with a Russian player in the 77th minute sent trainers onto the field to treat both players, and Gabrielle Carle was subbed in for Schmidt a moment later. Schmidt reportedly suffered a fracture near her cheekbone and eye socket. Because of the swelling near the fracture, she is unable to wear a protective face mask during competition and therefore must sit out until she is cleared to play.

Schmidt only recently returned to competition after fracturing her left arm during an exhibition match in Germany with her club team. The match against Russia was her second appearance for Canada since her wrist was healed enough to return to competition.

Melanie Leupolz out for four weeks with knee injury

Melanie Leupolz, midfielder for Bayern Munich of the Bundesliga, will miss about a month’s worth of action after suffering a knee injury during training with the team. According to a statement from the team, Leupolz suffered a partial ligament rupture and other injury to her right knee. As a result, the German midfielder will now be unavailable for her club’s Champions League quarterfinal matches against Paris Saint-Germain on March 23 and 29.

{MORE: The Lowdown: My weekend with NWSL referees | Julie Foudy kicks up her feet with Mia and Alex}

Leupolz was also one of three players unavailable for the German women’s national team for the SheBelieves Cup. As a result, the reigning Olympic champions struggled a bit offensively, losing to the U.S. 1-0 in their tournament opener and battling to a scoreless draw with France in the second match. However, the Germans still finished second in the tournament after defeating England, 1-0.

Through much struggle and much torment, I have decided to hang up my cleats. It has been frustrating yet passionate, restrictive though liberating, and belittling while empowering. I would not trade that experience for anything! I am so proud of the women who have contributed to the growth of the game and it has been an absolute honor to have been among those women. I owe so many thank yous to those who have supported me through everything, stayed in my corner, believed in me and gave me the opportunity. To those who made what was already difficult even more difficult, thank you! You've taught me an important lesson that I will never forget. I cannot wait to see the future of the game and the young players who will keep pushing every year to reach a dream, whatever that may be. Cheers to you, ladies!

After two years with FC Kansas City, forward Caroline Kastor has decided to retire from professional soccer. She made the announcement via social media Wednesday night around 11:30 p.m. ET. Kastor did not provide a reason for her decision in her statement to fans, nor was one given in a statement released by the team Thursday afternoon.

“Through much struggle and much torment, I have decided to hang up my cleats,” Kastor wrote. “It has been frustrating yet passionate, restrictive though liberating, and belittling while empowering. I would not trade that experience for anything!”

The Wichita, Kan. native came to FCKC in 2014 after graduating from Kansas University in 2013, but did not make her first appearance for the team until 2015. She made eight appearances for the Blues, helping the team in the run to win their second consecutive NWSL Championship. Last season, Kastor started in 3 of 15 appearances.

“Caroline was a big part of the team in the last two years,” said head coach Vlatko Andonovski. “She is a player that always brought different dynamics to our game. Replacing her and finding a player of her caliber will be something we are going to start to look for immediately. We want to wish Caroline all the best in her next stage in life.”

At Kansas University, the forward scored 26 goals and recorded 14 assists in 80 games played. 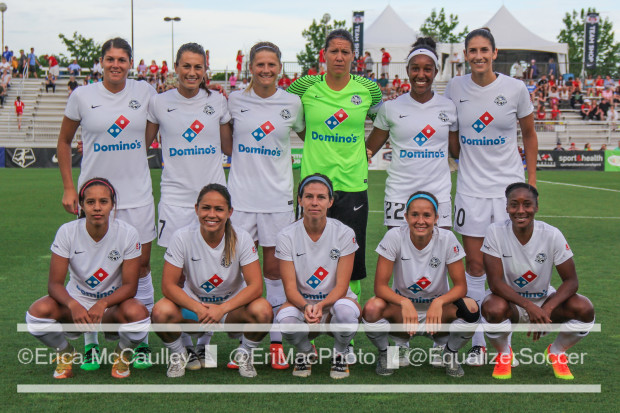 FC Kansas City will take on three collegiate teams during its 2017 preseason schedule. (photo copyright EriMac Photo for The Equalizer)

Just days ahead of the NWSL preseason, which kicks off on Monday, March 13, FC Kansas City released its preseason schedule. The team will play three preseason matches against D1 collegiate teams.

Vlatko Andonovski’s squad will first take on the University of Missouri on Sunday, March 19 in Columbia, Mo. Two weeks later the team will travel to Lincoln, Neb. to take on the Nebraska Cornhuskers on April 1. The Blues close out their preseason with a match against Kansas University on April 10. All three matches are open to the public.

Kansas City’s preseason opponents may be collegiate teams, but each of the three teams received bids to the 2016 NCAA tournament. Kansas defeated Missouri in the first round, but fell to UNC–who advanced to the College Cup–in the second. Nebraska also advanced to the second round of the tournament, where they lost to UCLA.

FCKC’s regular season kicks off on April 16 against the Boston Breakers at home at Swope Soccer village. Kickoff is scheduled for 5:00 p.m. CT.
***
In other NWSL news, the details of the trade sending Britt Eckerstrom to the Portland Thorns FC were announced on Wednesday. In return for the backup goalkeeper, North Carolina Courage received two 4th round picks in the 2018 NWSL College Draft.

The United States U-2o women’s national team finished out a three game series in La Manga, Spain on Tuesday, March 7 with a 2-0 win over France’s U-19 team.

Forward Sophia Smith, who just came off an impressive run with the U-18 team in England, continued her scoring streak as she scored the game winner in the 21st minute. The goal was her 9th in her last six international matches and her third for the La Manga series. Smith also tallied an assist in the contest, sending a pass to Kelsey Turnbow just outside the penalty area. Turnbow turned, dribbled around the goalkeeper who came off her line to try to deny her space and shot the ball into a wide open goal.

The La Manga series is the start of a new cycle for the U-20 team as they embark on the quest to qualify for the 2018 FIFA U-2o World Cup in France.

Julie Foudy kicks up her feet with Mia and Alex
Kronick: Can offsite NWSL broadcasts connect to fans?