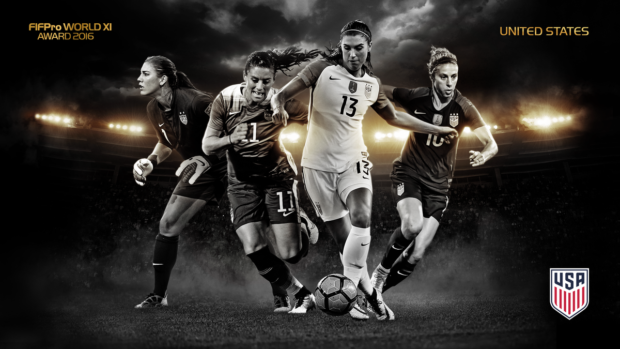 Four Americans including FIFA World Player of the Year, Carli Lloyd have been named to FIFPro’s Women’s World XI.  Hope Solo, Ali Krieger, and Alex Morgan were also voted to the team. Lloyd and Solo are repeats from the inaugural list of 2015. More than 3,000 players from 47 countries voted on the FIFPro Women’s World XI which was announced Wednesday in conjunction with International Women’s Day.

Two members of Germany’s Olympic gold medal team–Leonie Meier and Dzsenifer Marozsan–were also named to the World XI as was UEFA Player of the Year, Ada Hegerberg. Others honored were: defenders Wendie Renard and Nilla Fischer; midfielder Marta; and forward Eugenie Le Sommer. Renard and Le Sommer, both part of the French team that won the SheBelieves Cup on Tuesday night, are also caryovers from 2015.

FIFPro is a Netherlands based organization representing and defending the rights of 65,000 soccer players around the globe.

note: club affiliations are current and may not reflect 2016

Lauletta: Final thoughts on France, USWNT
Flash still breathing, will play in UWS, based in Buffalo