Unconventional Bouhaddi getting it done for France 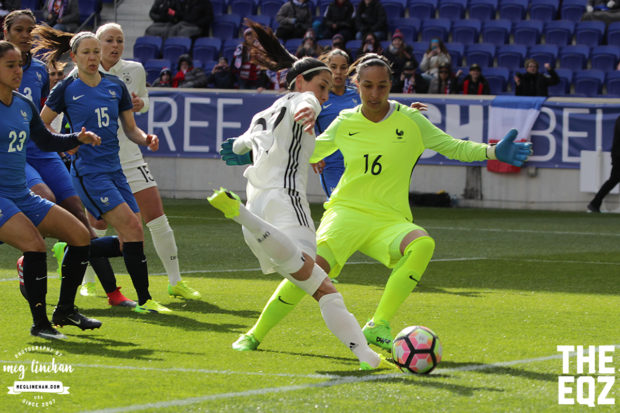 WASHINGTON, D.C – It can’t be easy being a professional goalkeeper in a modern social media world. Every little minor detail has you under a microscope. One day, you’re a hero, the next day a goat. It takes a special kind of individual to rise up and become the last line of defense. France’s keeper, Sarah Bouhaddi has stepped up her game at the SheBelieves Cup, and is a favorite for top keeper of the tournament. France sit first in the table with 4 points, and had no business holding Germany to a draw. Bouhaddi stole the show.

How did the Cannes native end up playing in net? It’s an old adage of a team simply needing a goalkeeper, and Bouhaddi being asked to play the position.

“(At) fourteen, they missed a goalkeeper,” Bouhaddi said through a translator. “They needed to replace one, and it was me. Everybody says that I was made for this job, so I took it. I try to direct everyone, and I enjoy it.”

She looks quite comfortable on the ball, and is highly noted for her distribution skills. It’s almost like having a roving defender working with the back four. Bouhaddi’s experience playing as an outfield player helped her transition.

“Before I played in the field (midfielder), and not as a goalkeeper,” said Bouhaddi.” I think this experience helped me to see the another game, and another way to be a goalkeeper. I try to evolve most of the time, and I try to be higher in the field, but I need to be careful, because sometimes it could be dangerous.”

Tobin Heath has played against Bouhaddi at the club and international level. She is well aware of the keeper’s talents. The Feminine Division 1 brought many battles between Paris-Saint German (Heath), and Olympique Lyon (Bouhaddi).

“Yeah, she’s a great goalkeeper,” said Heath. “She doesn’t have a traditional style of goalkeeping. She’s very good with her feet. She kind of plays a little more off her line than most goalkeepers. It’s always fun playing against those guys. I know them pretty well, and I think they’re fantastic.”

France center back, Laura Georges, has known Bouhaddi since they were teenagers coming through the Institute of National Football academy (INF) in Clairefontaine. It’s nothing new for Georges to see Bouhaddi making timely penalty saves or miraculous stops out of nowhere.

The 30 year-old Bouhaddi occasionally makes the tough saves look easy and the difficult saves look tough. It’s not a shock to see her go for a walk about or try to out maneuver an opposition forward before dribbling and passing the ball. Stopping the ball is the task, but making things a little exciting keeps her in the game, and opponents guessing.

“I have to work on my concentration,” admitted Bouhaddi. “I have to be focused on all the saves, and not only on the difficult ones.”

How hard can it be for a goalkeeper to stay focused for 90 minutes?

“It’s not difficult,” said Bouhaddi. “Sometimes we have to be very focused on the movement of the players and the ball. When I’m tired during the match at the end, it’s more difficult. This is why I have to work harder now.”

France holds all the cards at the table. They can capture the 2017 SheBelieves Cup with a win. If Bouhaddi plays out of this world, like she did against Germany, nobody will score against her. Sometimes all you need is a top goalkeeper in form to go on a lengthy run. “It will be a totally different game than against Germany,” said Bouhaddi of the U.S. match. “We have to be ready physically to be productive and efficient on Tuesday.”

The U.S. will want to throw Bouhaddi and France off track. Getting early pressure on Les Bleus will be key. If France bunker in, they could force the U.S. to adapt to a different style. Ali Krieger will hope to play in front of family and friends Tuesday night. She knows France well, and will be hoping Bouhaddi makes a mistake the U.S. can capitalize on.

“One of the main things that’s so great, that she (Bouhaddi) does, is her distribution and her touch of the ball is really good,” Krieger said. “We just have to be aware of building out of their back. We’ll be prepared for that. Hopefully counter, win the ball back, and transition on that. I think that’s one of the best parts of our game.”

France want to win the tournament, and the U.S. won’t want to start the calendar year with back to back losses on home soil. Bouhaddi is the only keeper to play every minute of the 2017 SheBelieves Cup. She has settled in, and looks to be ready for anything coming her way.