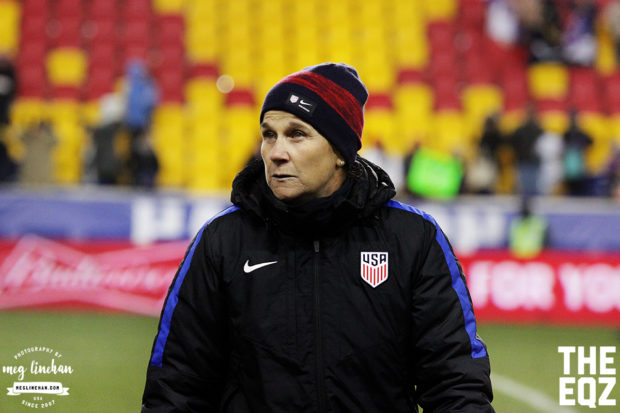 The 2017 SheBelieves tournament is over, but the discussion of what transpired over the last seven days won’t soon fade away. Hot takes being what they are it will be easy to write off the short-term future of the United States and their experimental 3-5-2 alignment. It will also be easy to overcrowd France’s bandwagon over the next few months until the European Championships in the Netherlands.

But when the hot takes cool off there is no denying that this week could wind up being a sea change for the teams that finished first and last at the tournament. For France, their first major challenge under Olivier Echouafni was one in which their mental and tactical games caught up with their considerable athletic and technical abilities. And whether or not the U.S. ever live to look good playing with three in the back or whether Jill Ellis ever recovers from this tournament, Tuesday night in particular was a disaster of epic proportions.

Don’t forget about England who proved they could hang with three of the best teams in the world and managed to win against the U.S. in the U.S. for the first time. And Germany who opened the event with a pedestrian loss to the United States, outplayed France in a draw, and then snuck in the backdoor for second place by beating England.

Here are my thoughts on where France and the United States stand as they leave Washington D.C.

France have long been among the most talented sides on the globe but other than a pair of Cyprus Cup titles, it had never amounted to much. Some of the spectacular failures included losing 4-2 to the U.S. in the 2012 Olympic group stage after taking a similar 2-0 lead that they did on Tuesday; and failing to put away Germany in the 2015 World Cup quarterfinals and then losing on penalty kicks.

Seventy minutes into the 2017 SheBelieves Cup, it looked like the same old story. Echouafni’s side trailed England 1-0 and looked to be cheerfully loping along toward their first loss to the Lionesses since what amounts to prehistoric times for women’s soccer—1974. And then all of sudden Marie-Laure Delie equalized and Wendie Renard—playing as a sub—went high to head home a corner kick in stoppage time. That was literally the final touch of the match and France had started to alter the script. Three days later in New Jersey, Sarah Bouhaddi set the tone by stopping Mandy Islacker’s 1st half penalty and then made several important plays in the 2nd to salvage a 0-0 draw on a day when Germany was better. Two matches, both of which easily could have been losses, and four points. 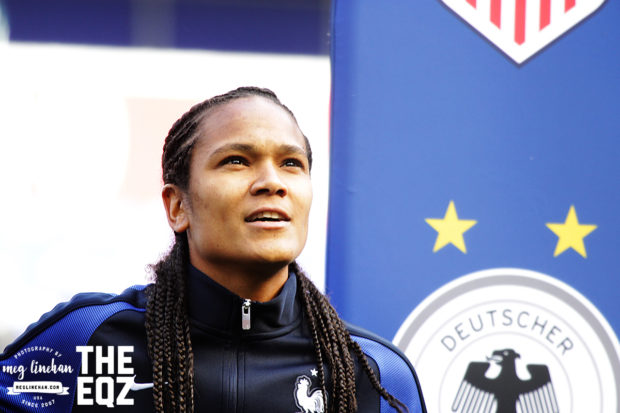 Then came Tuesday. Echouafni unleashed a courageous game plan that involved pressing the U.S. all over the park and forcing their back three to answer questions about whether or not it could be the conduit to build an attack (more on that below.) The result was two goals inside 10 minutes. But unlike five years ago France stuck to the game plan and kept pressing and pushing. During the end of the first half and beginning of the second, when the U.S. played its best soccer of the night, the French never panicked, and instead of having their lead cut in half, wound up making it 3-0 shortly after the hour. They were off and running from there.

Not to be forgotten is Amandine Henry racing back to clear a ball off the line after it had beat goalkeeper Meline Gerard. Even though the narrative of the match will be that France trounced the U.S.—and indeed they did—sometimes it is plays like that, which happened at 2-0, which keep momentum moving in the right direction.

In order for this to have long-term meaning for France they’ll have to take their momentum to the Euros where they may now be tagged as favorites. After that it’s the buildup to what will be a pressure packed World Cup on French soil.

How to build a national team

There are many differences between building a club team and building a national team. One of the biggest ones is that as a club coach you can pick out a style and then acquire players that fit. As a national team coach there is some flexibility to player selection but in the grand scheme of things, you’re left to make the best of the top 30 or so players your country has developed for a given period of time.

With that in mind it is time to give serious pause as to why Jill Ellis continues her commitment to the 3-5-2. One of the tenets of the formation, in Ellis’s own words, is that it keeps the team on the front foot at all times. I may not be a coach, but I just watched the U.S. play 270 minutes over the last seven days and the amount of time they spent on the front foot could probably be condensed into a high school English class. The amount of time on the front foot that was a direct result of playing with an extra midfielder could be condensed into the time between high school classes.

More importantly, the players Ellis is using simply don’t fit the system. I think Allie Long is a fine soccer player who is working hard to be a good center back, but two things ran through my mind as I watched her get torched by France on Tuesday night. Long is not the team’s best option to center a three-back nor is center back Long’s best position. She spent limited time playing higher in each of the last two games and immediately looked more comfortable on the ball farther away from goal.

{RELATED: One last hurrah for Captain America  |  Rapinoe says she will abide by anthem policy}

In the center of the park, Carli Lloyd started all three games and was barely a factor in any of them. No one has the ability to emerge from obscurity to start winning games like Lloyd does. The U.S. basically won the World Cup on the shoulders of that transformation. But at 34, is Lloyd so good that she has to be force fed into sitting under the forwards even when the team is struggling to score goals? I thought halftime Tuesday was the perfect opportunity to try someone else there if for no other reason than to shake things up.

The U.S. won all of their fall matches because they were playing against teams that were always going to be hard pressed to keep up. But those six matches should have been enough for the new world order to look a whole lot better than it did at SheBelieves. The team scored one goal in three matches and it wasn’t exactly the result of a beautiful buildup but rather a glorious, individual effort and a shot off the crossbar that pulled the German keeper and defense out of position. They all count of course, but goals like that won’t come often against the top teams in the world. And then on Tuesday, after a few dodgy moments on the weekend against England, the defense was soundly beat on a number of occasions. Yes, it is fair to wonder at this point where exactly this team is going with its current formation and tactics. And it is fair to wonder if Ellis is trying to squeeze players into the formation of her choosing instead of bringing in the best players and letting their respective strengths and weaknesses determine how the team looks.