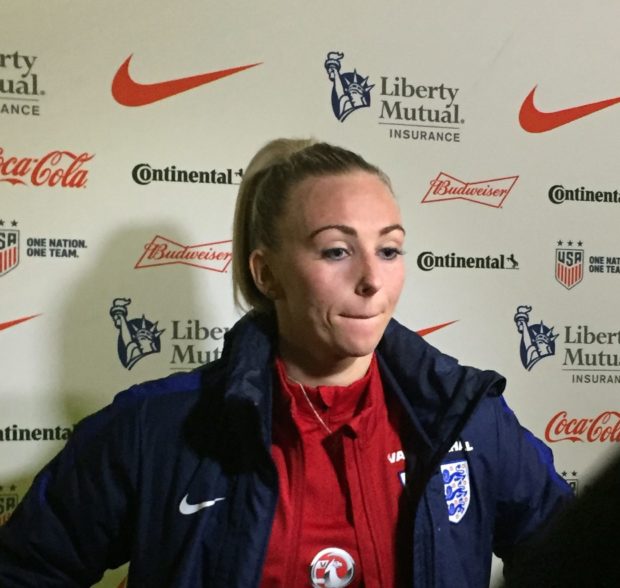 WASHINGTON, D.C – England and Germany got things going at RFK Stadium in the final doubleheader of SheBelieves Cup 2017. The Lionesses were in with a shout to claim the tournament title, but Germany had other ideas. Anja Mittag scored her 50th goal for her country in the 44th minute to help Germany to a 1-0 win over England.

“It was nice to score,” said Mittag. “It was a really tough game, a lot of yellow cards, really intense. In the end we are happy with the win, of course. I think it was important that we score a goal because we didn’t do it in the last two games. It was a good test for us, and we still have some things to work on for the European Championships in July.”

Manager Steffi Jones was delighted with her teams showing against England.

“The first game we were tired, but we showed a lot of passion. In the second game we created so many chances, and we played well too. Tonight, we were defensively better. It was a step better, a step better for the Euros. We have to be better.

“Anja Mittag,” added a cheerful Jones, “she always is on the spot. If she would be a little more un-nervous in front of the goal, she would have scored a second or third goal. I’m still really glad for her. As a striker, you want to score, and that’s why I’m happy for her. She’s a great player, and I’m sure that she’s going to make more goals towards the Euros.”

“Very difficult, I think,” said England striker Toni Duggan. “Any top player, they just want to win. No matter it’s a friendly or whether it’s in the back garden with your brothers. No matter, you want to win, and tonight we haven’t. Especially against Germany, we have a little bit of history with them. It was a close game, and we gave it our all. Unfortunately in the end, it just wasn’t enough.”

Jones started her top players as Germany wanted to end the tournament on a high note. Germany responded with chance after chance in the opening 45. Anna Blasse set up Mittag in the 14th minute only to see her shot sail well over the crossbar, nowhere near England keeper Siobhan Chamberlain. Skipper Dzsenifer Marozsan broke through the England back-line in the 23rd minute only to have her shot blocked.

Germany had trouble finishing in the final third against the U.S. and against France keeper Sarah Bouhaddi. Not to be deterred, Germany kept pressing the Lionesses with more scoring opportunities. Lina Magull struck the crossbar in the 33rd minute, and Marozsan setup Alexandra Popp with a free kick at the back post.

England could only hold off the Germany onslaught for so long. Magull played a brilliant give-and-go with Mittag in the 44th minute. The VFL Wolfsburg striker cut through the England box unmarked before blasting a thunderous rocket behind Chamberlain.

The halftime break offered momentary relief for an overwhelmed England side. Germany just wasn’t ready to switch off when the second half kicked off. They kept pressure on England and never really allowed their opponents to settle in.

Mittag had an opportunity to add a brace to her totals in the 75th minute. Popp found her back post only to have her unmarked header fly over the crossbar.

The Lionesses had few chances to find an equalizer, but when they did come close, they always seemed a step behind. A pass here and a bad touch there, England’s timing was off, and they just weren’t clicking. Germany doesn’t get beat often, and they showed that they still have a lot to offer with Jones in charge after taking over from Sylvia Neid after the Olympics. It was a positive SheBelieves Cup for England, but they will rue a missed opportunity to defeat Germany.