England win over US was long time coming 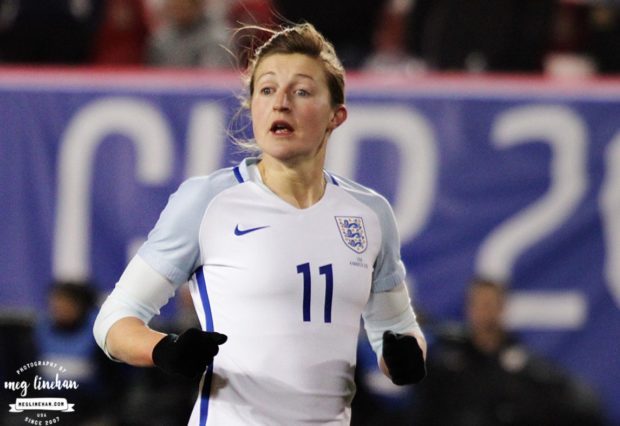 Ellen White’s 89th minute goal to beat the U.S. may have been England’s biggest win ever (photo copyright Meg Linehan for The Equalizer)

HARRISON, NJ. – If you follow England as close as some supporters do, you will know that Saturday’s historic 1-0 win over U.S. Soccer at Red Bull Arena, in front of 26,500 frozen spectators, was no surprise. England have slowly been progressing and achieving new heights with manager, Mark Sampson. A win over the U.S. in America was due and something England have been working towards for a long time.

Ellen White came on as a second half substitute and was in the right place, at the right time for her winning goal in the 89th minute. White made her England debut in March of 2010. This ranks as a career highlight for her and her teammates, and it’s especially sweeter because of the opponent.

“It was a fantastic moment for myself, obviously scoring for England,” said White. “To score on the home soil of the U.S.A and to get the win. It was an unbelievable feel. The team put in a fantastic performance. I’m proud of every member of the squad, on the field, off the field. To get the win, and to get the three points on the board for this tournament. Unbelievable feeling.”

The win was the first for England at SheBelieves Cup, and the first over the U.S. since 2011. In that match, England came away with a 2-1 win at Leyton Orient FC. Going back to 1988, England had only triumphed over the U.S. two other times before Saturday night. England have never beat the World Cup holder. This was the third time England have defeated the No. 1 ranked team in the world.

Sampson was over the moon with the result. England had more shot attempts on target (14) and more shots hitting the target (3) than the U.S. – This wasn’t a flick of the switch and a win out of nowhere. England was better, and the result was worthy of three points.

“This is not a smash and grab result,” a delighted said. “The last team to win here were China. They came here, got bashed, and nicked a one-nil. We didn’t get bashed tonight. We earned the win, we deserved to win.”

England vice-captain, Jordan Nobbs was sporting a bloodied and bruised nose, but she put in the work and delivered the cross that resulted in White’s goal. It is a win that will give new confidence, and greater belief for England who will see no limits heading into the Euro’s.

“We’ve just been taking things step by step,” admitted Jordan Nobbs. “I think you can’t always… with a new management team, jump to where you want to be. I think we’ve slowly been progressing as a team. We really believed as a squad, as a whole. Even against France, we did take a lot of positives from that game. I think the belief in the squad’s extra exciting now.”

It was England and not the U.S. who had the opposition on the back foot. The visitors had a match plan, and they dictated what they wanted to do. The U.S. looked frustrated and lacked new ideas when England was a bother.

“The belief in the squad was high coming into the game,” said Nobbs. “The first five minutes, we looked comfortable, we looked like we were prepared. I think U.S.A. didn’t really know what to do with us. I think our strategy and belief in the team, we stuck at it from minute one, and didn’t stop till the whistle went.”

We’ve seen glimmers of what England can do on the bright stage. Winning bronze at the 2015 World Cup was a brilliant first step under the Sampson era. A win over the U.S. might just be the top showing for the gaffer.

“I think it’s the best result, I won’t deny that,” said Sampson.

England just keeps getting, better, and better. The Lionesses have 30 wins in 48 matches with Sampson in charge. He has brought in a new strategy featuring younger players. He’s shown structure with his tactics, and at the same time, given his players confidence in their abilities. The results speak for themselves.

“Yeah, one-hundred percent,” White said. “I think what you say is completely true. We’ve grown, developed as a squad under Mark, and we’re still progressing. This tournament is fantastic for us, we want to be playing the best teams in the world. U.S.A, France, Germany. We’ve got to get that winning mentality against them. Compete against them, but ultimately we want to win against them. This really shows where we’ve come, and how far we can go, looking forward to the Euro’s.”

England is in with a shot to capture the 2017 SheBelieves Cup as they take on Germany at RFK Stadium in Washington, D.C. on Tuesday night. A win against Germany would give them six points. A France win over the U.S. would give Les Bleus the glory.

“I’m sure U.S. and France will have some squeaky bums watching us play Germany,” said a chuffed Sampson. “If we can turn up, front up, put in a performance like we did tonight. There’s no reason we can’t put six points on the board, and see if someone can over take us.”
England have all the momentum and this will do wonders for the Lionesses going forward. They relish the opportunity to take on Germany. A forever rival that brings out the best in England, Germany has yet to score at SheBelieves 2017, and they look far from world beaters.

“We love big games against Germany, that’s our bread and butter,” White said.

Bread, and butter, scones and jam. It’s all coming up Lionesses at the minute. It’s a big credit to Sampson and his staff that have turned England into a women’s soccer powerhouse. They are knocking at the door, and continue to rise as a top contender.