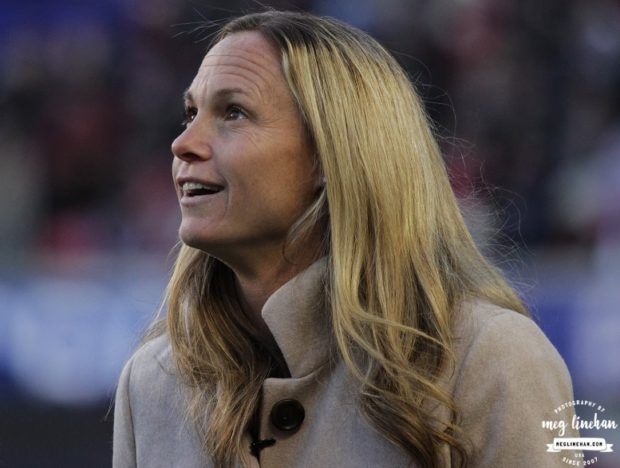 HARRISON, NJ. — Ellen White cleaned up a mess inside the six-yard box one minute from full-time to give England a 1-0 upset of the United States in SheBelieves Cup play on Saturday at Red Bull Arena. The play started with a corner kick that the U.S. easily cleared but Lucy Bronze collected it at the top of the 18 and hammered a shot off the crossbar. Morgan Brian took a bad touch trying to clear, with a little help from Julie Johnston moving into her line of site, and White stuck it in for the only goal across two games on a bitterly cold day in New Jersey.

? The goal that gave England their first win against the #USWNT on American soil. #SheBelievesCup https://t.co/bhVg8LDiM7

Prior to the match, US Soccer played a video tribute to Christie Rampone who spent 19 years with the national team, the last eight as captain. Rampone and her daughters made a brief appearance next to a mounted No. 3 Rampone jersey. Abby Wambach surprised Rampone by being at the match and presented her with flowers. Heather O’Reilly and Nicole Barnhart were also on hand at Red Bull Arena.

Ironically, the loss for the U.S. was the team’s first outright defeat since losing 1-0 to China in Wambach’s final match on December 16, 2015. Despite being eliminated in the quarterfinals of last summer’s Olympic games, that match went to penalties and goes on the books as a draw. The result was also the first setback for the U.S. in the SheBelieves Cup while England collected their first in in the tournament.

Jill Ellis tinkered with her personnel for the match but continued her commitment to lining up with three center backs. But among the defenders who started against Germany, only Becky Sauerbrunn returned to the field. Julie Jonston took Allie Long’s spot in the center of the trio while Ali Krieger got the nod wide left in place of Casey Short. In goal, Ashlyn Harris replaced Alyssa Naeher.

Harris and her English counterpart Siobhan Chamberlain both made show-stopping saves in the first half to keep each other’s sides off the board.

First up was Chamberlain. After scampering across the goal mouth to follow a Crystal Dunn cross she was forced to reach back the other way and parry Rose Lavelle’s shot up and over.

Next came Harris. Johnston put a soft clearance on an England free kick and Nikita Paris took it down, split two defenders, and laced a shot only to be denied by a cat-like Harris.

The U.S. dropped to 9-4-1 all-time against England. Saturday was the first time England has defeated the U.S. in the United States.

Earlier on Saturday, Sarah Bouhaddi stopped a Mandy Islacker penalty in the first half and made several other key plays to thwart a vibrant German attack and steal a 0-0 draw for France. The French now lead the SheBelieves Cup and will win if they defeat the United States on Tuesday at RFK Stadium or if they draw and England does not beat Germany. The Germans are eliminated from winning the SheBelieves Cup.