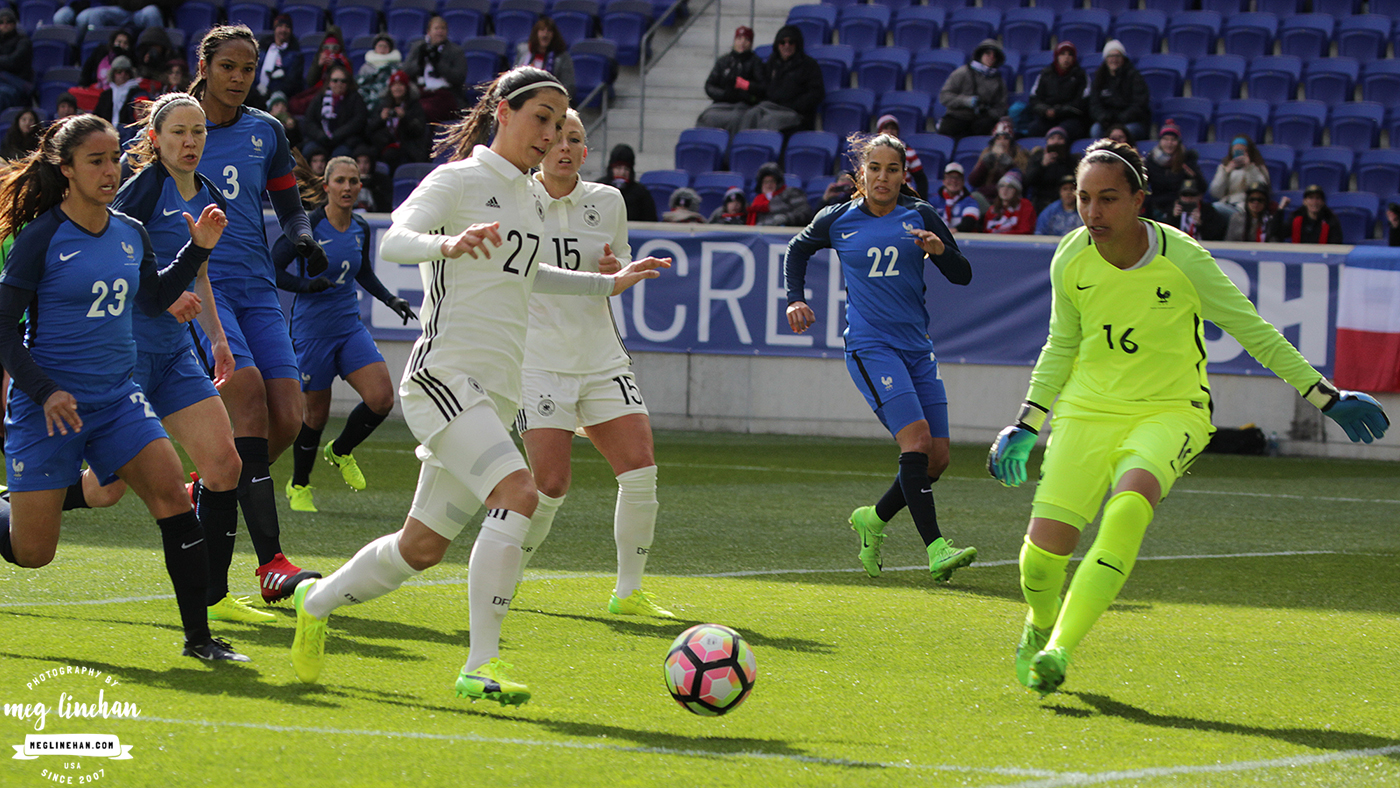 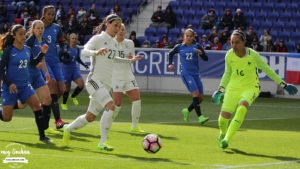 Neither France nor Germany could find the back of the net in their second match of the SheBelieves Cup. (photo copyright Meg Linehan for The Equalizer)

HARRISON, N.J.- France and Germany opened the second round of matches at the SheBelieves Cup at Red Bull Arena in arctic-like temperatures. The two power-house European nations played a nil-nil stalemate that included a first half penalty save by Les Bleues keeper Sarah Bouhaddi. The star of the match was Bouhaddi, who had five saves on the day and was by far the best player on the pitch.

“It was a very good game, with a lot of intensity,” said Bouhaddi via a translator. “We’ve got two beautiful teams, Germany and France. It was close during the first halftime, and in the second half. We lost some occasions, some opportunities for the other team. It was a good game in general.”

Germany skipper Dzsenifer Marozsan felt that her team performed better today, but in the end the result just wasn’t there. Germany ran into a terrific goalkeeper that was in the zone.

“I think it was a really good match from us,” said Marozsan. “We played better than the first game against U.S.A. It’s just that we don’t score, that’s the problem. I’m very happy and proud of the team because we made a good match. We have a lot of chances to score, but today we can’t. I don’t know why. I hope we can score in the next game. We weren’t lucky today.”

Olivier Echouafini’s side looked the part as they showed up to play and fought hard for 90 minutes. The same could not have been said on Wednesday night in Chester, Pennsylvania. France looked listless for eighty-minutes before nicking a 2-1 win off England.

France center back Laura Georges was a late omission from the match versus Germany. The Paris-Saint Germain product was sick and forced to watch from the sidelines. She had a great vantage point and shared her thoughts on France’s holding off Germany.

France changed tactics and started more of an offensive-minded lineup with Camille Abily, Eugenie Le Sommer, Wendie Renard and Marie-Laura Delie in action. Germany coach Steffi Jones rested many of her starters, choosing to bring Anja Mittag, Leonie Maier and Alexandra Popp on in the second half.

The highlight of a defensive opening 45 included a give and take from Sarah Bouhaddi. The Olympique Lyon shot-stopper brought down Mandy Islacker. Referee, Karen Abt pointed to the spot, awarding Germany a penalty. The 30 year-old, Bouhaddi dove to her left to deny Islacker and Germany a goal.

Did she have a book on Islacker or any indication of where she might send her penalty?

“I didn’t know, but I tried to see with her run, before she shoots. It helps me,” said Bouhaddi.

Looking to find any signs of offensive life, Germany ramped up their scoring efforts to try and break the deadlock. They spent the majority of the second half keeping France hemmed in. If not Bouhaddi’s fantastic form, Germany would have had half a dozen goals.

Bouhaddi made save after save and also got some luck from her crossbar. Anja Mittag, sitting on 49 goals, missed a wide open net that would have surely assured Germany a victory. It just wasn’t Germany’s day. France showed that they can play great defense and keep Germany off the score-sheet.