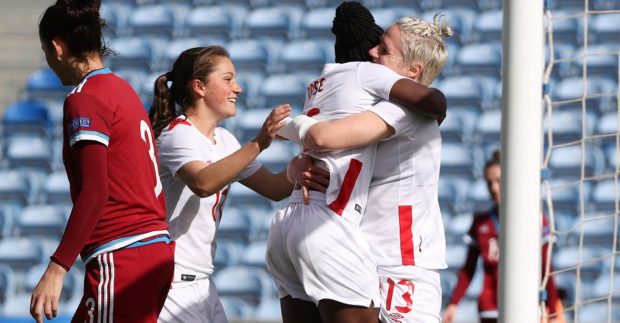 Canada 2, Russia 1 (Group A): Canada defeated Russia today to earn three more points on their quest to repeat as Algarve Cup champions. Sophie Schmidt opened the scoring in just the 10th minute when she volleyed a ball from Deanne Rose into the back of the net. The assist for Rose helped mark her 18th birthday. However, it was none other than captain Christine Sinclair who scored the game-winning goal for Canada, when Russia turned the ball over to her on a bad back pass. Sinclair split a pair of defenders with her shot to the bottom left corner, putting Canada up 2-0 in the 26th minute. In the second half, Russia scored off a free kick just outside Canada’s box, but they were unable to find an equalizer and Canada walked away victorious once more.

Denmark 6, Portugal 0 (Group A): Stine Larsen scored a brace after barely a half hour to key a Danish route of the hosts. Sanne Troelsgaard also netted a pair for Denmark. Line Jensen opened the scoring after 9 minutes and Katrine Veje added one after halftime. Denmark and Russia remain mathematically alive to win the group but will need Portgugal to pull a monumental upset of Canada on Monday.

Japan 2, Iceland 0 (Group B): Japan bounced back from opening the Algarve Cup with a loss by defeating Iceland 2-0 in the second match of group play. They came out scoring early, Yui Hasegawa putting two goals away in the first 17 minutes of play. Although the Japanese wouldn’t score any additional goals after her brace, neither would Iceland, and the scoreline remained 2-0 at the final whistle.

Spain 3, Norway 0 (Group B): Spain continued a superb tournament with a 3-0 route over Norway. Maria Thorisdottir scored an own goal for Norway to open the scoring before Jennifer Hermoso and Olga Garcia added goals to get the final score on the board before the halftime whistle. Spain, who knocked off Japan on Wednesday, need just a draw against Iceland on Monday to win the group.

Australia 3, Netherlands 2 (Group C): Australia came dangerously close to blowing a three-goal lead, but a little luck and some superb goalkeeping by Lydia Williams preserved the win for the Matildas. Australia dominated the first half, up 3-0 going into the halftime break after Emily Gielnik scored a brace and Alanna Kennedy added one of her own off a perfectly-executed set piece. However, the second half was a much different story as the Matildas had trouble finishing while the Dutch attack wreaked havoc on the Aussie defense. Vivianne Miedema first put the Dutch side on the board in the 75th minute, and just four minutes later Sherida Spitse scored off a free kick. The Netherlands continued putting pressure on the Aussie defense and shots on goal, but a couple of big saves by Williams denied them of the equalizer.

China 0, Sweden 0(Group C): China earned their first point of the tournament despite still lacking a goal thanks to a scoreless draw with Sweden. The result sends Group C into a state of chaos ahead of Monday’s final matches. Sweden remain in control at 4 points but a slip up against the Netherlands opens the door for the Dutch or Australians to win the group. The group winner here will also need Canada or Spain to drop points to have a chance at playing for the Algarve Cup championship Wednesday.

Day 2 of Cyprus Cup group play brought a few surprises and bunched up the groups to the tune of eight teams from a dozen in contention to advance to next week’s championship match. One of the eliminated teams may surprise though—New Zealand are last in Group B cannot finish any higher than 6th.

Austria 3, New Zealand 0 (Group A): The shock result of the tournament so far saw Austria throw their name in the hat to win the tournament while New Zealand continue to falter in the aftermath of Abby Erceg’s announcement she would leave the team when it’s over. Nicole Billa, Verena Aschauer, and Jasmin Eder all scored for Austria who enter the final day of group play in strong position to snag Group B.

South Korea 2, Scotland 0 (Group A): Ji So-Yun and Cho So Hyun scored to keep South Korea unbeaten and in the mix to play in next week’s championship match. Scotland are not out of contention to take the group but must beat Austria on Monday and hope for help from New Zealand against South Korea.

Belgium 4, Italy 1 (Group B): Belgium hammered Italy to move into position to capture Group B. The Italians took the lead on 10 minutes through Daniela Sabatino, but a minute later Belgium won a penalty and Tessa Wullaert converted to equalize. Ellen Van Wynendaele put Belgium on top late in the first half with her first international goal. Maud Coutereels and Davina Philtjens extended the lead in the second. Belgium now lead the group ahead of Monday’s clash with North Korea where they could win and still fall behind Switzerland on goal difference.

Switzerland 1, North Korea 0 (Group B): It took 88 minutes to find a breakthrough in this one. Rahel Kiwic accounted for the only score to move Switzerland to 4 points and put the North Koreans in trouble ahead of the final day of group play. Switzerland trail Belgium on goal difference for the group lead but face winless Italy on Monday. North Korea can still win the group with a victory over Belgium combined with Switzerland not beating Italy.

Wales 0, Czech Republic 0 (Group C): Jess Fishlock’s Wales side failed to find a goal against the Czech Republic setting up a Monday battle against Ireland for the group.

Ireland 0, Hungary 0 (Group C): The lowest ranked team in the competition (No. 40) held Ireland (third lowest at Mo. 34) to a scoreless draw as Group C play finished the day without a single goal. Ireland now faces off against Wales with group honors on the line. A draw would leave the sides even on all counts and put their fates to a drawing of lots.