Mallory Pugh brings the youth back to the USWNT 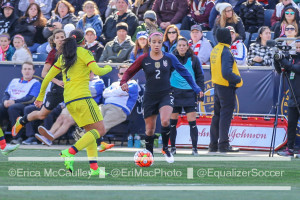 Mallory Pugh brings the youth back to the USWNT after a six-month absence. (Photo Copyright Erica McCaulley for The Equalizer)

CHESTER, PA.―After half a year away from the United States women’s national team, Mallory Pugh is back.

In the USWNT’s opening match of the SheBelieves Cup, Pugh subbed in for Crystal Dunn in the 58th minute. It was the first time the teen phenom has taken the field for the USWNT in over six months.

Coming off the bench in the second half against the No. 2 team in the world might be daunting for some players after such a lengthy absence, but Pugh said it only took a second to re-acclimate herself to playing at the highest level.

“As a team, this was our first game this year. But for me, I haven’t been in in a while, so I think it was a big test, but I know the nerves just kind of settle down once you get your first touch on the ball.”

Pugh’s last appearance for the United States was in the team’s quarterfinal loss to Sweden in the Olympics. Despite the disappointing outcome for the U.S. in that tournament, she cited the experience playing against top competitors that the Olympics gave her as a reason why her return to the USWNT was not as nerve-wracking at it could have been.

“Coming back into these games, especially against Germany in our first game of 2017, I think just having the experience from the Olympics and believing in myself that I can be here and that I can play against some of the best teams in the world, that really helped me kick off this year.”

The win over Germany no doubt helps kick off her 2017 on a high note. Despite all of her accomplishments in 2016–she was capped after her first call-up to USWNT camp, scored her first goal in that cap, became a regular in the starting XI and was named to the roster for a major world tournament–the year was also full of disappointments for the teen. Besides the USWNT making their earliest Olympic exit in history, Pugh also suffered a minor ankle injury which caused her to miss the team’s September friendly against the Netherlands. She also deferred her freshman year at UCLA to compete with the U-20s in their World Cup only to once again come home from a major tournament empty-handed.

“It’s been a big roller coaster, I’d say,” Pugh said, describing the journey she’s made since joining the team in January 2016. “There’s been ups and downs, but I have learned so much and I have just, I think I’ve grown and I’m just looking to continue to grow and to just become a better player and a better teammate.”

At only 18 years of age, a fact many fans and media are quick to mention, Pugh was Jill Ellis’ first foray into infusing the USWNT with youth. She’s also the most lasting as she has since earned 18 caps, 4 goals and 7 assists.

In comparison, Ashley Sanchez, 17, was called into camp in April 2015, but the striker, who was the leading scorer for the U-17 team last year, left camp early to return to school and has not been called back into camp since. After initially impressing Ellis during the U-23 team’s January training camp, 16-year-old Brianna Pinto was invited to train with the senior team for the first few days of its January camp and has since been named to the SheBelieves Cup roster. However, fans will have to wait a little bit longer to see if she will be capped during the tournament.

With almost a 20-year gap between the oldest and youngest players on the USWNT, there could be a disconnect between players on the team, but Pugh said the older players were quick to bring her on board, something she herself is now doing with Pinto.

“I feel like it’s not so much a duty for me, but I think just like how some of the girls helped me come in and adjust and get in with the team, I think that’s something I really want to help with Bri,” she said. “All the older girls, even the young ones, everyone is just here for everyone and we all compete and that’s what really makes us better.”