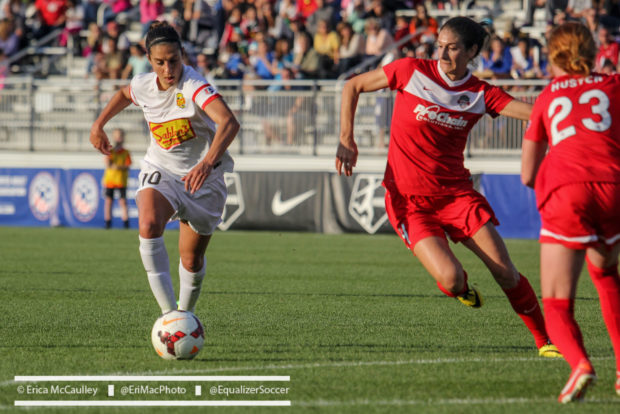 At long last the 2017 NWSL schedule is out. The wait was not without its share of agita from the fanbase, but the final product dazzles with each team hosting just one midweek match for the season. With the schedule back at 24 games and the league at 10 teams, there are 120 fixtures in all, the most ever for an NWSL regular season. Let’s look at XI of those 120 that might wind up being particularly juicy.

The new Lifetime television deal will kick off in front of the Thorns’ incredible throng of supporters at Providence Park and will feature the two power teams in the league. The Pride were not very good in the second half last season and won’t have Alex Morgan for at least the first few months of the season, but they remain a draw and an important team for the league.

Among rematches of the previous season’s finalists, they won’t come much stranger than this. The Spirit have torn down last year’s near-championship team with five of the 11 NWSL Championship starters no long with the team (two others are out with ACL tears.) The Courage are mostly intact save for the small tidbit that they were sold earlier this year and will be playing about 700 miles from their previous home in Rochester. Unfortunately, it looks like this match has been scheduled as the backup Lifetime match meaning most won’t likely be seeing it live.

The Pride will be a hot watch early in the season. For this one they play their first match at Orlando City Stadium (which hosts its first MLS match this weekend), a brand-new, 25,000 seater the club is hoping to sell out on opening day. If they do it will break the league’s single-game attendance mark (23,403) set in the Pride’s first ever home date at what was then the Citrus Bowl.

The Courage will re-christen WakeMed Soccer Park as home to women’s pro soccer with their first home contest since being acquired by Steve Malik in January. The Thorns boast former North Carolina players Meghan Klingenberg and Allie Long plus Lindsay Horan who spurned UNC to sign in France as a teenager. The Courage will be the defending champions—sort of. Perhaps they will honor the 15th anniversary of the 2002 Carolina Courage who won the WUSA (Founders Cup) playing in a former iteration of WakeMed. Oh, and the last time these teams played they put on a show for the ages in last year’s semifinals.

When the Breakers traded up to secure four of the first nine picks in this year’s draft, it seemed to mirror the 2015 Western York Flash who also made four picks in the opening round. Will the Breakers be able to mimic the Flash who won the title two years into their rebuild before moving to North Carolina? We won’t know by May 7, but the meeting will be interesting regardless. Plus it will have given the new-look Breakers three matches together to try and build some chemistry.

The teams that monopolized the NWSL Championship in 2014 and 2015 both slumped to miss the playoffs in 2016. Injuries, retirements, pregnancies and overall lack of form conspired to do them both in. Neither sat idly by this offseason, and both have their eyes on a return trip to the playoffs. The tactical battles between the coaches are usually fun and with revamped rosters there should be some new wrinkles this season. It is also the first meeting between the clubs since Merritt Mathias drove Shea Groom’s head into the turf resulting in a one-game suspension (there was no foul or card issues on the play). If this one is good, take note, they do it again a week later in Seattle.

Among the original eight NWSL clubs there are only two instances in which one team has yet to beat another. One is the Breakers against the Reign. The other is Sky Blue against the Red Stars. Their last meeting was particularly gnawing since Sky Blue had what looked to be an equalizer only to have the officials claim the ball never crossed the goal line. The Red Stars then ran off with the second half and marched directly to the playoffs while Sky Blue’s Cinderella summer crashed and burned from there.

Last year’s Pride match in Washington was one of the most popular of the season thanks to the Spirit fully and completely embracing their guests in the first match for both teams after the Pulse shooting in downtown Orlando. This one figures to have a far different feel. Former Spirit captain Ali Krieger will make her return as a member of the Pride after being moved in a trade that infuriated Spirit fans. If this match were today, the loyalty in the SoccerPlex may well lean toward the Pride. It will be interesting to see where loyalties lie come July.

This is the last of three Cascadia Cup matches and the only one currently scheduled in the Lifetime window. The first legitimate rivals have already played 13 times (Thorns lead, 6-5-2) and the Thorns’ inspired play against the Reign while missing more than half of their starters went a long way toward Seattle missing the playoffs last season. In the four seasons NWSL has existed, one of these teams has won a trophy every time. This rivalry is for real.

Last year the Courage’s Lynn Williams (then of the Flash) and Dash’s Kealia Ohai battled down to the wire for the golden boot. Williams prevailed on the assist tiebreaker. Then in the fall when Williams set the USWNT record for fastest goal on her debut, Ohai topped it by a second the very next game. Williams has clearly pulled ahead on the international stage, but it will still be nice to see them square off again in NWSL. And you won’t get to see it until the final week of August.

The Reign and Spirit seem to have memorable encounters late in the season. The Reign have gotten the better of the Spirit in the most important moments, winning two straight semifinals and last year denying the Spirit the Shield. There was also that little thing about the national anthem last September. This is the final regular season game (so who knows which games will be enticing) and is the first and only trip to the Plex for Megan Rapinoe and the Reign.