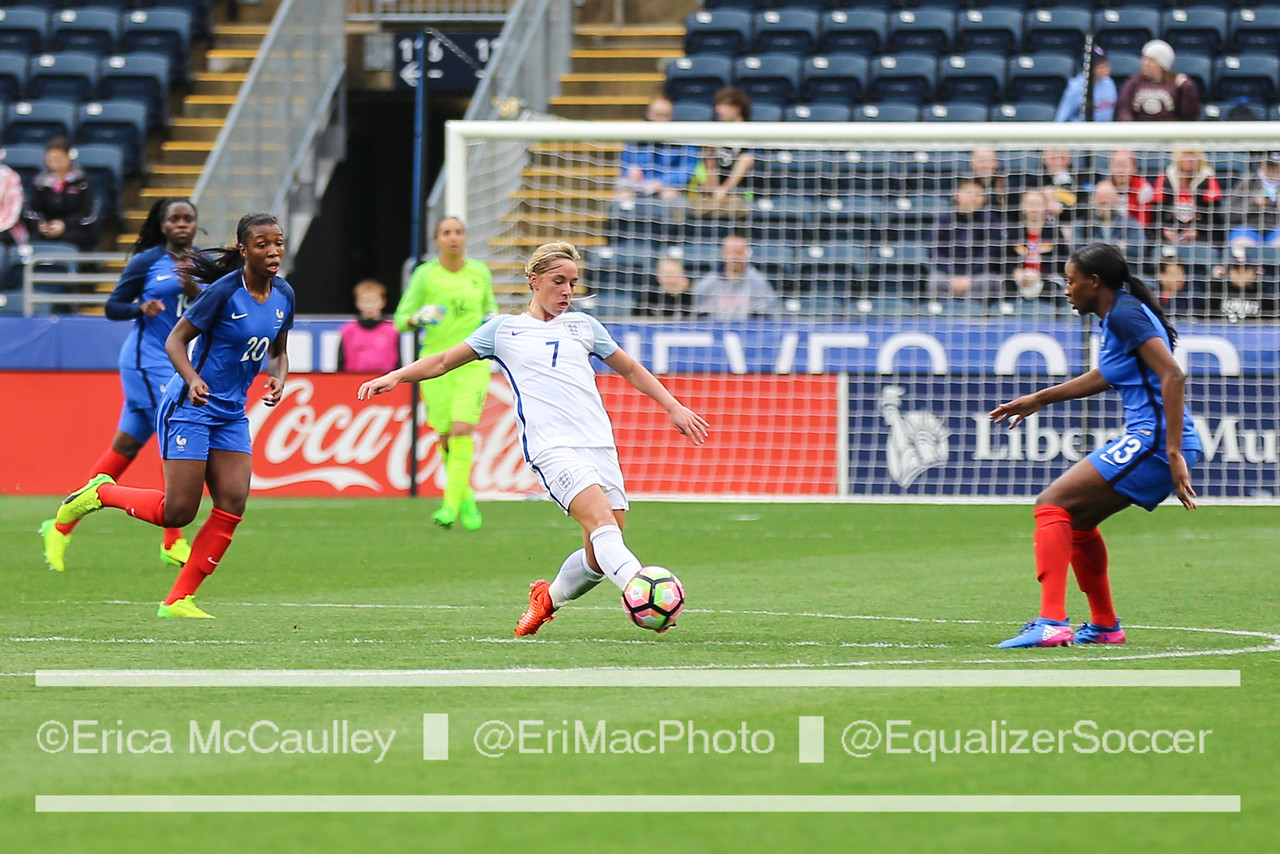 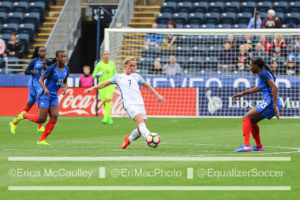 Jordan Nobbs put England up in the first half, but the Lionesses couldn’t maintain the lead. (photo copywright EriMac Photo for The Equalizer)

CHESTER, PA – France and England renewed hostilities in the opening match of SheBelieves Cup at Talen Energy Stadium. France came away with a shocking 2-1 victory over England after the Lionesses had controlled and dominated much of the match. Marie-Laure Delie and Wendie Renard scored to cancel out a Jordan Nobbs first-half tally. The Olympique Lyon defender came on as a second half sub before scoring the winner at the death.

“I’m happy to score because it was the last occasion to score,” said Renard through a translator. “I’m very happy for the team, and I’m happy for me, too.”

France have always excelled on set pieces. It’s not a fluke that they are able to use their height advantage over their opposition. They practice and perfect crosses and set pieces.

“We know that these kind of tactics are really important,” said Renard. “They can help us to save a situation. Yes, we work it at least fifteen or twenty minutes at training and we try to make the best on it.”

England held a 1-0 advantage for the first eighty minutes. Arsenal Ladies’ Jordan Nobbs fired home a cracker from distance. France keeper Sarah Bouhaddi got a piece of the ball but was not able to turned aside the shot.

The Lionesses controlled the match through the midfield, and kept France from getting any pressure on them in the opening forty-five. Mark Sampson’s squad was first to every ball, and made sure to commit a strong defensive shape.

However, they could not keep it up. It was a tale of two halves for England and Manchester City goalkeeper Karen Bardsley.

“It certainly is,” said Bardsley. “I thought we were absolutely outstanding in the first half. Probably one of the best performances England have put out, especially against top opposition. I think we can take away a lot of positives from our performance in the first half. The second half, we were really disappointed with the overall lack of adjustment. We really should be able to squeeze the pitch and get pressure on the ball. They kind of exploited that. They had a lot of time, and they seemed very comfortable in the midfield. We were disappointed to concede and obviously in the manner that we did.”

Why did England switch off in the second half? It seemed as if they parked the bus and were content with trying to secure a 1-0 win. Surely, a tactic that never really works.

“I wouldn’t necessarily say it was a lack of anything that we did,” admitted Bardsley. “It was almost like France really stepped up their game. They brought on a lot of their starters that we kind of expected to start the game. They probably got a telling off at halftime. They obviously did make some adjustments, and really put pressure on us to really stretch us out. They kind of made it really difficult for us to get across the pitch. I think they exploited the flanks and got some quality balls in and obviously capitalized on set pieces. I think this is a really good learning experience for us.”

Manager Olivier Echouafni made five substitutions in the second half. In came Camille Abily, Renard, Eugenie Le Sommer, Elodie Thomis and Amel Majri. His decision to save his top performers for when England would likely tire and chase the match was brilliant. England reverted to defending without much effort to get forward, and it cost them.

France came in waves, with chance after chance. You could slowly see England trying to hang on and hope for their first victory over France since November, 9 1974. Eighteen matches without a win over France, and they came so close to making history.

But it was not to be. Marie-Laure Delie connected on a cross that Thomis sent into the England box. Delie split a pair of England defenders before converting on a header.

Four minutes of stoppage time went up, and England fans were hoping they could hold on for a respectable draw. Instead, France brought the house and weren’t willing to settle. Renard smashed home the winning goal via a header. France looked lost for eighty-minutes, but they woke up and claimed all three points over England.