Naeher takes Round 1 in battle to be top keeper 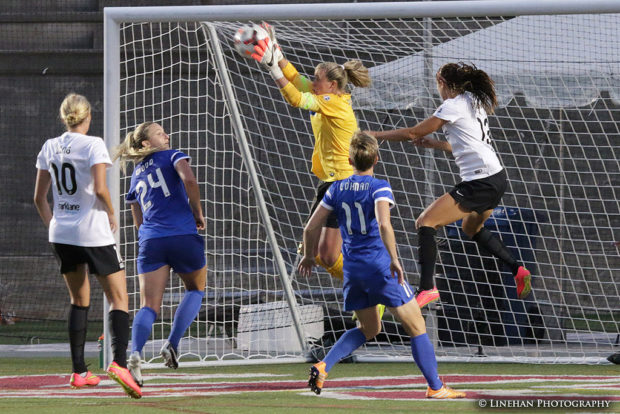 Alyssa Naeher won the Germany round of the goalkeeper competition. But Ashlyn Harris is waiting. (Photo Copyright Clark Linehan for The Equalizer)

CHESTER, PA. — For the first time in recent memory, possibly in forever, there is an open goalkeeper competition on the U.S. national team. When Hope Solo was pushed out last summer, it left Alyssa Naeher and Ashlyn Harris to vie for the top spot on the depth chart. Neither of them are particularly new to the team. Both are World Cup champions from 2015 and were on the SheBelieves Cup roster last year. But Solo played every minute of both the 2015 World Cup and 2016 SheBelieves Cup, not to mention the 2016 Olympic Games.

Wednesday night in Chester, Pennsylvania it was Naeher who got the nod from Jill Ellis against Olympic champion Germany, and she ran with it, making one particularly difficult save and overcoming windy conditions and an as yet unrefined 3-5-2 formation to shut out Germany, 1-0.

“I thought Alyssa managed the game really well,” Ellis said after the U.S. improved to 4-0-0 all-time at the SheBelieves Cup. “Her distribution was great. They’re a very dangerous team around the box. She played very well.”

The last two years have vaulted Naeher into the conversation when it turns to the sport’s elite keepers. After two plus years buried in Boston when great save after great save went as far as to make her NWSL Goalkeeper of the Year in 2014 despite a 2.26 goals against, one season in Chicago and more time with the national team has helped refine her game.

“There’s a lot of times that in a 90 minute game you might have to do one thing, so it’s just being ready for it,” Naeher said. “Obviously it’s a good confidence booster to be able to have a save rather than a goal. That helps calm down a little bit and those things feel good. Germany being a very good opponent, they’re going to have their opportunities.”

As far as playing behind three defenders rather than four, it is a formation rarely used in NWSL and never regularly by any of Naeher’s teams. Ellis said it keeps the team constantly on the front foot, and as a result sometimes the back line and keeper have more work to do when the ball is lost.

“We’re more involved with our feet being back there as an outlet, even sometimes having to reset the play and get back into our shape. I’m just trying to put myself in the right pockets to be a supportive player–finding those channels and finding those pockets so that I can try to help those three.

“There’s a lot happening and a lot of players running through. There is a lot more space to cover with three so communication is a huge part of it.”

Naeher said that communication in back is a team effort. Allie Long, a player with limited experience as a defender, is the most central player and can usually see the most. But Becky Sauerbrunn has built a career as a defensive leader and remains a vocal element for the back three.

Unlike during the Solo era and many eras before that, there are no guarantees going forward for Naeher. Harris sat on the bench against Germany but figures to get time in at least one of the remaining two SheBelieves matches.

“I’m not going to give my lineup out early,” Ellis said, “but the commitment is to play them both.”

Naeher is taking the uncertainty in stride: “The only thing I have control over is what I bring to the field every day. At the end of the day it’s the coach’s decision, so I try to focus on what I can control and leave my mind there.”