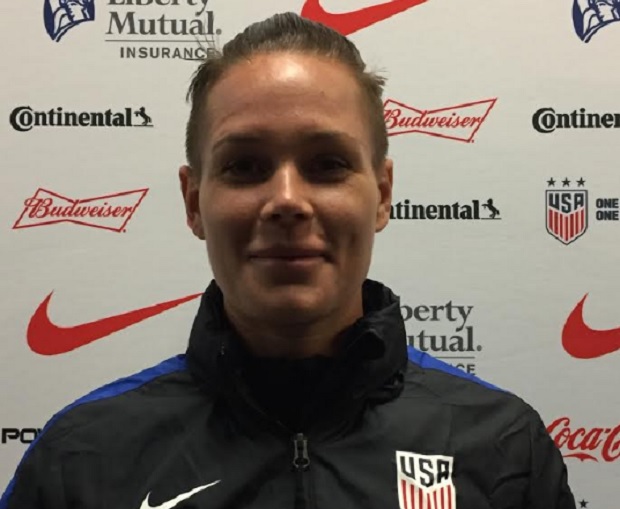 PHILADELPHIA, – The Hope Solo era with U.S. Soccer is likely over for good. The void of a true solid number one keeper will be hard to fill. Coach Jill Ellis has a pair of great options in Alyssa Naeher and Ashlyn Harris. Both keepers will get some action during the SheBelieves Cup tournament since Ellis is in no hurry to anoint her top keeper. With the 2019 World Cup and 2020 Olympics off in the distance, it’s going to be a long evaluation period.

“That’s to be determined,” said Ellis when asked about her number one keeper. “That’s part of what I committed to after the Olympics, just giving them games. In truth, this is the biggest games for Ash and Alyssa. When you suddenly compete beyond the podium, it puts a whole new emphasis on the importance, the stress. For both of them, I think these games are a big test. Is one game going to determine it? No. You have to look at consistency in playing. I know she’s (Ashlyn Harris) done very good in the league, but it’s a different level. It’s not just seeing them one-off for a couple of games or a game against a lesser opponent. It’s seeing them against these bigger opponents and how they manage the stress, the pressure and obviously the action, because they get a lot it.”

The Orlando Pride shot stopper isn’t worried about who is going to play next or when. Harris is taking everything in stride as it comes since she can only control what’s right in front of her. By working hard and playing her best, Harris is already doing all that she can to add to her 11 internationals caps. More playing time and more responsibility will eventually come from Ellis.

“Depending on who she (Jill Ellis) decides to pick, I have to be okay with,” Harris said. “I’m not going into these games thinking this is my one chance. It’s not the case. We’re two years out of any major tournament, we’re just getting our feet wet. It’s important for all of us to get good games, experience. It’s about preparation. If you’re prepared going in, you’ll feel confident, and I feel prepared.”

Having the opportunity to play against top-tier one teams like Germany, England and France will give Harris and Naeher a chance to show that they can compete against stellar opposition. Many CONCACAF opponents don’t bring high-scoring offense and tight matches, and both Harris and Naeher have proven they can succeed in the NWSL. Taking their game to the next level means shutting the door and helping to pick up results this week and beyond.

“I think Alyssa and I are great goalkeepers,” said Harris. “I think consistently, every year we have great NWSL seasons, and that’s not by chance. That’s because we come in and we are experienced and we do well under pressure and we are ready for these opportunities. We just have to be given them. That’s why this tournament’s great. We’re both going to play. I think a lot of players are going to play that you haven’t seen in big competition. All around, it’s just going to build this program.”

The 31-year-old Harris knows that the opposition has a lot more at stake with 2017 EURO preparations underway. The U.S. will be facing the best that Germany, England and France can offer. There could perhaps be a bit of rust in the early stages of Wednesday’s match against Germany as the U.S. has had a lot of time off. It’s not ideal, but it’s something Harris isn’t bothered about after two very busy calendar years.

“We know that they’re firing on all cylinders,” admitted Harris. “These teams are getting ready for the EUROs, so they should be in tip-top form. For us, we haven’t played in months, but that’s not an excuse. It never has been an excuse for us. This is the way the cycle works sometimes.”

Goalkeeping should not be a major concern for U.S. soccer fans and pundits. Yes, it’s a change seeing a different keeper in net, but it’s a good change. This is a brilliant opportunity for Harris and Naeher to play and show what they can do now that net is wide open.