Henry hoping SheBelieves can be launching point for France 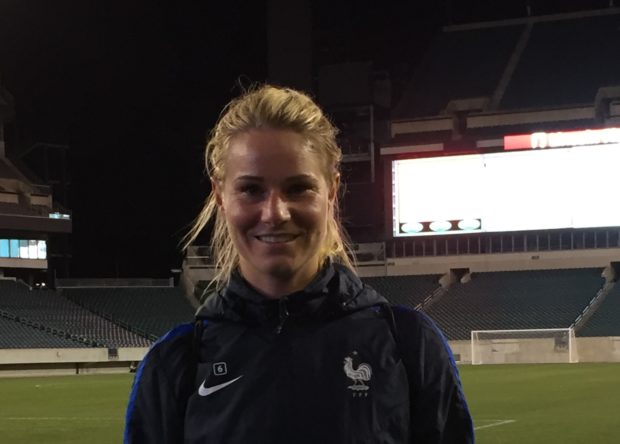 PHILADELPHIA, PA – The SheBelieves Cup is about to get going Wednesday with France vs England in the opening match at Talen Energy Stadium, in Chester, Pennsylvania. U.S. Soccer fans will recognize a familiar player on the pitch. France midfielder, Amandine Henry will be in action for Les Blues as they hope to kickoff the tournament with a win.

A lot has transpired since France shockingly exited the 2016 Rio Olympics at the quarterfinal stage in a 1-0 loss to Canada. The dynamic Louisa Nécib Cadamuro has retired and manager Philippe Bergeroo was sent packing, and replaced by Olivier Echouafni. A change was due, and players like Henry, have already noticed a much better positive relationship.

“There is not really a big difference,” said Henry through a translator. “Maybe, if I have to choose one, it’s that he tries to develop our game, trusts us, and makes it so we are of interest.”

France, ranked no. 3 by FIFA, has always been a side with great expectations, and equally large disappointments. A team with fantastic technical skills, ball control, and roster depth should be winning medals and lifting trophies with regularity, but that’s not been the case. Getting results at the SheBelieves Cup will help France prepare and gain confidence heading into the 2017 European Championships in Holland this summer.

“We know that there is a great expectation about us,” admitted Henry. “We hope that the SheBelieves Cup can help us to find our level between all the three important teams.”

To try and help improve her own personal goals, Henry made the switch from Feminine Division 1 to Portland Thorns FC last March. She wants to better hone her talents, and compete at the same physical level that we often see from American and Canadian players. It’s a work in progress that has Henry feeling more and more comfortable everyday.

“I don’t know if I’ve had enough time to improve my game compared to them,” said Henry. “Now that I know them, I’m not a lot afraid anymore, to play against them. I know that they’re playing like me, training like me, the same thing as them.”

The 27 year-old will return to Portland this summer, following her loan spell with Paris Saint-Germain, and the Euro’s. She’s clearly not the type to sit ideal during the winter months. When a loan opportunity with PSG came up, she knew it was what she wanted to do to help prepare for the Euro’s, and the NWSL campaign with Portland.

“I missed football,” revealed Henry, “It was a great thing for me to play for PSG during the six months. I needed to find out my (football) sensation, my position on the pitch, and technical suggestions. Now it’s good, because I’m ready to go back to Portland.”

The She BelievesCup is all about bringing together the top teams in the world. Having the chance to play Amandine Henry and France is a great test for England, Germany, and the U.S. It’s also a unique occasion for fans to watch some of the best footballers on the planet.