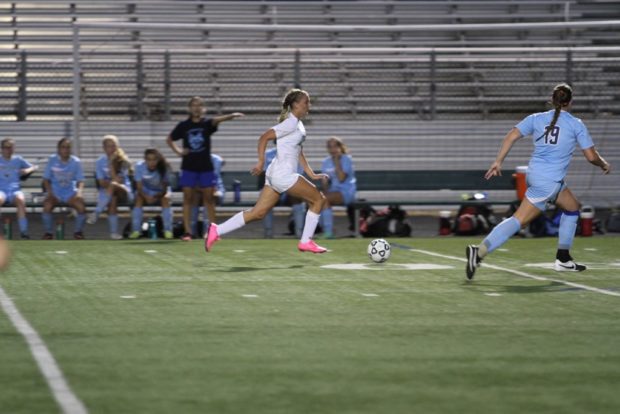 On Feb. 16, U.S. Soccer named Miriam Hickey as the program’s first director. In an interview posted on the organization’s website, Hickey, who brings 25 years of coaching experience to the position, said: “We want to make sure that every talented youth player is given the opportunity to develop and we do not want any talented player to be overlooked…We must continue to raise the level of the game in the U.S., so we can continue to win World Cups and Olympic gold medals, and that means we must not only develop the players, but also the coaches and get them ready for the demands the international game places on them.

“The DA will assure that the elite players train with and play with and against like-minded players and are coached by top level coaches who have committed to continue to educate themselves.”

The Girls’ DA program will follow the structure of the Development Academy for boys, which was first introduced by U.S. Soccer in 2007. But as of 2012, when the season was extended from seven to 10 months, academy players are not permitted to compete with their high school teams. With spring tryouts fast approaching, the pressure is now on for female players to choose their direction. And many concerns have been raised by players, parents and youth coaches alike, wondering whether the academy format actually has the girls’ best interest in mind.

USWNT coach Jill Ellis was on hand at the Girls’ DA launch meeting in December and spoke to youth club leaders and directors about the program, which currently includes 71 clubs—selected by U.S. Soccer through an application process—divided among six regions, and what it means for elite girls’ soccer players and their potential paths to the pinnacle of women’s soccer in this country: a spot on her national team roster.

“At the outset you are talking not about a league but you are talking about a platform for development,” Ellis told the crowd, according to an article published on U.S. Soccer’s website. “I think the fundamental basis of what this is going to serve, it’s for development. The Development Academy is going to bring clubs and coaches to become more aligned in terms of what the big picture is: to find players and help them become the best soccer players they can be.”

no easy comparison to boys program

U.S. Soccer’s decision to launch a Girls’ DA came as no surprise. Because, equality, right? But it’s difficult to compare what’s best for men’s and women’s soccer in this country because they are on two separate planes. The U.S. Men’s national team has been unable to compete at the top of the international game—and in 2016 failed to qualify for its second consecutive Olympics. The top-ranked USWNT (per FIFA.com’s latest world rankings) won its record third Women’s World Cup in July 2015. And though the American women are in a transitional period after suffering a major setback at last summer’s Rio Olympics where they crashed out in the quarterfinals to Sweden—their worst result ever at a major international competition—there is no shortage of young talent waiting in the wings. So, why “fix” what doesn’t seem to be broken?

It certainly makes sense to implement an overall umbrella structure that would help guide top youth leagues when it comes to instruction and player development. But playing high school soccer provides so many intangibles that help create more well-rounded athletes and teammates.

“High school soccer provides invaluable life experience,” Georgetown University men’s soccer coach Brian Wiese said. “From time management necessary to balance academics with competition, to leadership qualities and performing under pressure. Academy soccer is played in a sterile environment. In high school you’ve got the crowds, it’s fun. The kids have a great time. But I think the experience [of playing high school], the leadership and the character building, a lot of these intangibles that high school provides, I see a lot of these things becoming holes in the qualities you want in recruits.”

And one major distinction between boys and girls soccer in this country is that while on the men’s side, for most top programs and athletes, the college years are a sort of weigh station before a potentially lucrative professional career. While the National Women’s Soccer League (NWSL) is preparing for its fifth season, when none of its predecessors made it past three, and just signed a three-year sponsor and broadcast deal with Lifetime Network, it’s virtually impossible for non-USWNT members to make a decent salary playing professional soccer, so most female high school student-athletes still see NCAA Division I soccer as their end goal. Hopefully that trend will change as women’s soccer continues to grow, but many coaches agreed the team-first high school soccer environment does tend to be more similar to college soccer than the club atmosphere.

going up against the established ecnl

Another obstacle facing the Girls’ DA is that, while such an elite academy was missing from the youth boys side, the girls program will be going head-to-head with the Elite Clubs National League Inc. (ECNL). Established in 2009, the ECNL has been providing the nation’s best players the opportunity to train with and compete against one another.

According to its website, 1,224 of 1,346 ECNL seniors graduating in 2016 will go on to play soccer in college. And 969 (79 percent) of them, are signed to NCAA Division I programs. In addition, ECNL players account for more than 80 percent of the total U.S. Soccer Youth national team player pool.

It’s difficult to understand why U.S. Soccer would create a developmental program for girls when the ECNL already serves that purpose; several top club coaches in the Washington Metropolitan area said an alliance might be more beneficial, as this setup is sure to dilute rosters. Plus, a decade in, and the USMNT is still waiting for the academy to spring the next superstar. The USWNT has seen wave after wave of them. And 18-year-old Mallory Pugh, who reportedly remained loyal to her high school squad despite her busy schedule and national team call-ups, seems to be leading the next one—last summer she became the youngest player in U.S. history to score in the Olympics, according to U.S. Soccer’s website.

When questioned about criticism regarding the limitations, Hickey’s response was: “To develop optimally, it is in the elite players’ best interest to be part of a consistent learning environment, with as few distractions as possible. Becoming an international level player requires that matches are played with the international demands and rules placed on them. The work/rest ratio will not be optimal if players compete in other environments. To benefit the most from each activity, it is essential that players are 100 percent recovered before each training session and match.”

As with the boys’ academy, there is sure to be a learning curve with the girl’s program over the next few years. But for now, young girls stand at a crossroads in their respective soccer careers, and it’s hard to know which is the best path to take.

“If you take away camaraderie, the aspect of playing for your team, from the girls side…I think if you gave the top players in the country the choice of playing at a high level for ECNL and the ability to play high school, or the ability to play at an equivalent level at the academy, you’ll lose kids because they want to play for high school,” Wiese said. “I think high school soccer is much closer to the [team-oriented] college soccer environment.”