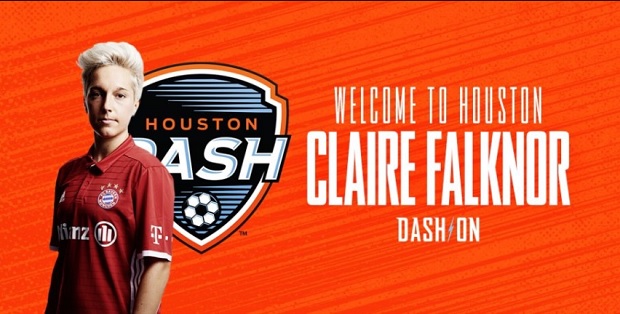 The Houston Dash announced on Friday that they have signed American defender Claire Falknor for the upcoming 2017 season, pending receipt of her International Transfer Certificate.

Falknor, 23, comes to Houston via Germany, where she played for FC Bayern Munich of the Frauen-Bundesliga in 2016. There she won the league title and reached the quarterfinals of the UEFA Champion’s League.

“Claire brings a playing style that fits nicely with the way we play here in Houston. She’s very skillful, with the ability to play anywhere across the back line,” Dash head coach Randy Waldrum said. “She has a high soccer IQ and will adapt quickly to our way of playing. She’s highly competitive and knows how to win, proving that both at Florida and with Bayern Munich.”

Falknor is the second defender Waldrum has brought in from overseas this offseason, as the Dash signed South African captain and center back Janine Van Wyk in December. The Dash’s defense was a weak spot last season, and starting goalkeeper Lydia Williams was second in the league for goals allowed and third in saves as a result. Falknor could bring some much needed help to the Dash back line.

An All-American at Florida her senior year, Falknor made 93 appearances on the Gators back line, scoring 2 goals and recording 5 assists. She was also called up to the U.S. U-23 team in 2015 and was named to its Four Nations Tournament roster. She made one start over two appearances for the team during that tournament.

Following her senior season at Florida, Falknor reportedly signed an 18-month contract with Bayern Munich. However, the club announced in December that she would be leaving early, spurring rumors that she was leaving for the NWSL.

In an offseason marred by Americans departing the NWSL to play overseas, Falknor is now the second American to return to home to play in the NWSL after playing overseas. Sky Blue FC signed Manchester City midfielder Daphne Corboz last month after initially taking her in the 3rd round of the 2015 NWSL College Draft.