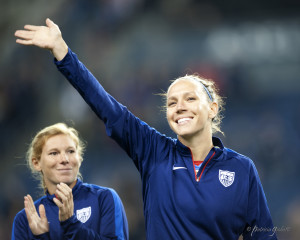 Former USWNT and FC Kansas City star Lauren Holiday opened up about recovering from brain surgery in an Instagram post on Sunday. The midfielder underwent surgery at Duke University Hospital in October to remove a benign brain tumor. The surgery took place approximately one month after giving birth to daughter, Jrue Tyler Holiday.

“I have never quite known suffering like I experienced the last six months,” Holiday said. “I can remember countless nights repeating ‘there may be pain in the night but joy comes in the morning.’ I remember half believing it and half still in disbelief that this was my life.”

In September it was revealed that Holiday had been diagnosed with the brain tumor near her orbital socket when she was six months pregnant. Doctors put off surgery until six weeks after she gave birth, but her labor was induced to speed up the timeline for surgery.

Her husband, Jrue Holiday, missed 12 games with the New Orleans Pelicans to help take care of Lauren and their daughter. Despite the difficulty of her recovery, Holiday said in her post that it is her family, especially her daughter, who helps her get through the hard times.

“Every time I see this smile, I’m reminded that joy does come in the morning. Maybe not the next day, maybe not even the next month, but it comes,” Holiday said of her daughter.

Holiday retired from professional soccer in 2015. She spent eight years years with the USWNT, over which she earned 133 caps, scored 24 goals, won two Olympic gold medals and ended her career as a World Cup champion. She is also a two-time NWSL champion with FC Kansas City.

I have never quite known suffering like I experienced the last 6 months. I can remember countless nights repeating “there may be pain in the night but joy comes in the morning.” I remember half believing it and half still in disbelief that this was my life. I memorized scripture and some days my faith felt unshakable and others I was scared to death. Every time I see this smile I’m reminded that joy does come in the morning. Maybe not the next day, maybe not even the next month but it comes. I can’t imagine what heaven will be like if this is the joy I get to experience on earth. Psalm 30:5

United States women’s national team legend Abby Wambach took to social media on Sunday to announce her engagement to Glennon Doyle Melton, a Christian blogger and best-selling author. Wambach posted a picture of both women’s hands adorned with their diamond engagement rings with the caption “Happy” to her Instagram account.

The news comes just months after the two announced their relationship on Melton’s social media account on November 13, although the two had been dating for a while before making the announcement.

The marriage will be the second for both. Wambach was previously married to former professional soccer player Sarah Huffman, and she revealed in her memoir Forward that she missed the 2015 NWSL season to return to Portland to work on marital problems despite previous statements that she was sitting the season out to prepare mentally and physically for the World Cup. The two divorced in 2016 after less than three years of marriage.

“This is reward for the work put in by the players and all the people who have been supporting women’s football in Colombia for so many years now,” Montoya told FIFA.com. “We are so happy to have a professional league. It’s a historic moment for the country and it goes without saying that we are very happy and excited.”

The league’s formation shows just how far the women’s game has come in Colombia. Rincon told Yahoo! Sports that her father used to pop her soccer balls with a knife to prevent her from playing because of the sexism surrounding the sport. However, his attitude changed after watching her score a hat trick in a match when she was just eight years old.

“Since then he has been my number one fan,” Rincon, a player whose advocacy for a league was key to its formation, said.

The new women’s league consists of 18 teams divided into three round-robin groups, with each team playing the other five teams in its group home and away through May 7. The top two teams in each group and the two best 3rd-place teams will then advance into tournament-style play. The final two teams will face off in the league’s Grand Final in June.

“The national championship will help raise the standard of the national team,” Rincon, who plays for Patriotas Boyaca, said. “We’re all going to become better players and the national team will keep getting better too, because there are a lot more girls out there who want to have that opportunity and who’ll see that they’re going to get noticed now.”

The winners of that Grand Final will not only be crowned the league’s first champions, but they will also go on to represent Colombia in the next Women’s Copa Libertadores. Thanks to a deal signed with the Liga Ibrerdrola Femenina, the champions will also take on Spain’s national champions home and away.

Despite wanting to wait to start our family and this being a shock..Barca plays better w/ the trio & so do we! I will join Chicago in 2018. pic.twitter.com/DXwQlTfXbn

Michele Vasconcelos announced today that she will be missing the 2017 NWSL season with the Chicago Red Stars as she is expecting her first child. Vasconcelos, née Murphy, married fellow BYU soccer player Pedro Vasconcelos in 2014.

“Although we were hoping to wait for a little while to start our family and this was initially a big shock for us, we are excited for this adventure and new addition to our family,” Vasconcelos said. “I’m excited to cheer on the Red Stars this season and officially begin my journey with them in 2018!”

The midfielder, called a Rookie of the Year contender by Red Stars Head Coach Rory Dames, was taken by Chicago as the No. 11 overall pick in January’s draft. At BYU, Vasconcelos played 91 matches, scoring 33 goals and recording 30 assists. In her senior season, she was ranked 2nd in the nation in assists per game (0.62), 3rd both in assists (13) and total points (45), and 5th in points per game (2.14). She was also top 10 in total goals (16) and game-winning goals (6).

The last of Vasconcelos’ game winners was in BYU’s 2-1 win over Oklahoma in the second round of the 2016 NCAA tournament. The Cougars were eliminated in the third round of the tournament in a 1-0 loss to South Carolina.

She can do it all by herself! @murph_vas7 scores the gamewinner in @byusoccer_w's 2-1 2nd round win over Oklahoma. #NCAAWoso pic.twitter.com/sc51mE1gSm 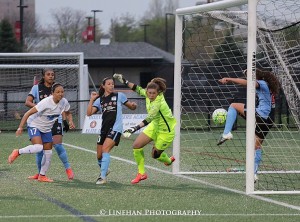 In all the Red Stars will play in five preseason contests, starting with a March 16 road match against the University of Wisconsin. Last season the Badgers finished 9-5-8 on the season after falling to the University of Florida in the second round of the NCAA tournament.

From March 26 through April 1, Chicago will take part in the second annual Portland Thorns Spring Invitational at Providence Park. There they will take on the Thorns, Houston Dash and the U.S. U-23 women’s national team in a round-robin tournament.

“We realized after last season that we needed to take on challenging opponents during preseason to prepare for the rigorous NWSL season,” said Rory Dames, head coach of the Red Stars. “With the tournament we are able to take on top teams in the NWSL and the U-23’s, which will be highly beneficial when regular season kicks off and give us a great look at our roster at that time.”

The Red Stars close out their preseason on April 6 when the Red Stars will travel to Indiana to take on Notre Dame. Notre Dame was upset by North Carolina in the ACC tournament semifinals before being upset in the first round of the NCAA tournament after losing by penalty kicks to SIUE. The Fighting Irish finished 2016 with a 13-3-5 record.

The road matches against Wisconsin and Notre Dame will be open to the public and free of charge.

Savannah Jordan, the second all-time leading goalscorer from University of Florida, signs with Glasgow City FC for 2017 (Copyright: Steve Bruno for The Equalizer)

Over the weekend University of Florida standout Savannah Jordan scored a hat trick in her professional debut with Scottish club Glasgow City FC. Glasgow defeated Jeanfield Swift 8-0 on Sunday to advance to the next round of the Scottish Women’s Premier League Cup tournament.

“I was excited to get it underneath us and get the first win. I’m kind of relaxed going into the season now,” Jordan said in a post-game interview.

Jordan was predicted by many to be a first-round pick in the 2017 NWSL College Draft, but rumors that she would be going overseas to play saw her draft stock drop. However, it didn’t drop nearly as far as expected, as Portland Thorns coach Mark Parsons traded two draft picks to acquire Jordan’s rights.

During her four years at Florida, Jordan was second only to Gators alumna Abby Wambach in both the Southeastern Conference’s and Florida’s record books in points, scoring 81 goals and recording 27 assists over 94 games played for 189 career points (Wambach had 242).

Despite playing with Glasgow this season, Jordan has said she will return to the States to play in the NWSL in 2018.