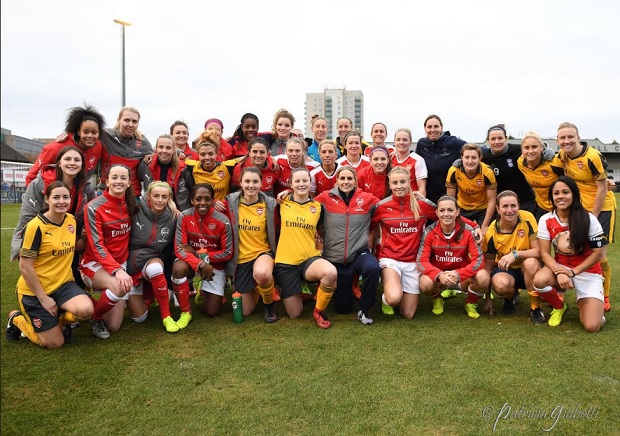 Kelly Smith is surrounded by her Arsenal and All Star teammates at her farewell match. (photo copywright Patti Giobetti for The Equalizer)

It was farewell to England’s greatest this weekend as players past and present took part in a celebration match to mark the retirement of Arsenal Ladies legend, Kelly Smith. Smith, 38, announced her retirement last month after leading the way in the women’s game in England for over two decades and later revealed that she is three months pregnant, meaning she was unable to play in the day’s spectacle.

It was the perfect send-off for a player not only lauded for her achievements in England, but for the impact she has had on the game globally. Friends, family and former teammates descended onto Boreham Wood Football Club’s Meadow Park Stadium to watch the Arsenal Ladies first team take on an All Star side selected by Smith herself.

World Cup Winner and Olympic Champion Heather O’Reilly made her first appearance in front of the home fans following her move from the NWSL, while the All Star Team contained a combination of players currently playing, such as England internationals Steph Houghton and Jill Scott, and those who have long retired, including former England Manager Hope Powell.

While this wasn’t a match where results or performances mattered, this wasn’t your average testimonial. With Pedro Losa picking a strong side that also contained the likes of Kim Little and Jodie Taylor, this was another opportunity for his team to get vital minutes ahead of the FA Women’s Super League Spring Series, which commences in April.

However, there was a plenty of fun to be had too. Former English Premier League referee, Howard Webb, officiated the match, even getting involved in the action when flicking on a headed clearance during the first-half.

Arsenal goalkeeper Sari Van Veenendaal swapped sides at half-time, standing between the pipes for the All Star Team in the second half, actually denying her Arsenal teammates with some fine saves in the 45 minute period. She was also involved in an amusing moment with referee Webb, when the two high fived each other following a yellow card handed to Jodie Taylor, who was booked for diving. In a competitive match, a penalty would have been awarded.

The first real moment of what this game meant came in the first half when Kim Little gave Arsenal the lead, which was followed by the entire team running over to Smith, who was managing the All Star Team, to embrace her in celebration. This was replicated by her All Star Team at the start of the second half when England captain Steph Houghton pulled a goal back to make it 2-1 after Dan Carter had added a second for the Gunners.

The disappointment of not seeing Smith one last time went up in smoke towards the end of the second half when the All Star Team won a penalty. Chants of “Kelly, Kelly, Kelly” went up within the stands before the Arsenal legend removed her tracksuit top to reveal her famous number ten jersey underneath. She strolled onto the field, with players from both teams forming a guard of honor for her to walk through as she approached the penalty spot.

“I was really nervous, my heart was racing. I went through the guard of honor and I was really nervous,’ said Smith. “I said to Howard Webb if I missed, could I take it again because I’d have been embarrassed to miss. Luckily I just stuck it in the corner.”

It has finished 4-2 to Arsenal Ladies – but look who scored for the All-Stars! #ALFC #Arsenal #Gunners #WeAreTheArsenal #COYG #ThankYouKelly

Post-match, Smith thanked fans “from the bottom of my heart” for turning up to show their appreciation before a number of presentations took place, including one from Smith’s father, Bernard. A touching moment involving someone who Smith has always praised for his influence on her career.

After signing autographs for over an hour, the media finally got to speak to the woman of the hour, and a visibly emotional Smith was understandably overwhelmed by the afternoon’s events.

“I’ve had probably one of the best days in terms of memories and I’ve been made to feel very, very special,” she said. “I feel very honored that so many friends and colleagues have been a part of this special day. I’m delighted to see so many people who have supported me over the years. I’ve given my whole life to football and Arsenal Football Club, this club has always been in my heart and the way they honored me today, I got a bit emotional.

“I did get a bit upset, just the fact that this is the end now, I’m not going to play football again, and that [penalty kick] was a little bit of a reality. But I just want to thank everyone for turning out today.”