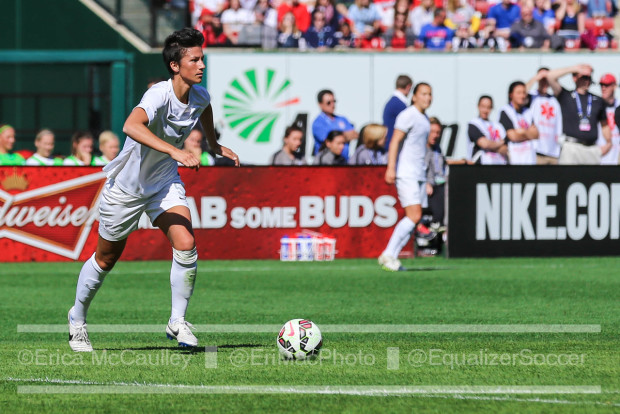 On Monday Abby Erceg announced her retirement from international soccer in a statement on her social media accounts. Although she did not go into specifics, the defender cited unfavorable circumstances within New Zealand Football as the reason for her decision.

“Due to the unfortunate and unfavourable circumstances within the organisation that is nzf, it is with regret and great sadness that today is the day that I announce my retirement from the international game,” Erceg wrote in the post. “Without being able to justify my involvement any longer I will be stepping back in the hopes to create change for the current and future generations of nz footballers.”

Erceg, 27, expounded on her claims in an interview with RadioNZ.com, in which she said the demanding training schedule and low pay made it difficult for the Football Ferns to make a living wage. She claims New Zealand Football does not support its players, citing a lack of funds to adequately pay the players.

“The thing I’ve heard the most is we have no money and we can’t afford it, and that’s really hard to accept as a player when your organisation for the past eight years have been in a surplus and they’ve announced a profit for the last eight years.

“We just want an environment where we are able focus on this job that we call football and we’re able to do it without having to worry about if we pay the bills, if I’m going to be able to eat next week, if I’m going to get to these pinnacle events and be in a position where I can actually perform.”

With Erceg’s claims, New Zealand now joins a number of women’s national teams that have faced recent strife. The United States women’s national team continues its “Equal Play, Equal Pay” fight as it negotiates a new CBA with U.S. Soccer. In December the Nigerian Super Falcons staged a sit-in in their hotel after failing to receive payment and bonuses for winning the Women’s African Cup of Nations tournament. Australia pulled out as an opponent in the USWNT’s 2015 World Cup victory tour during a strike over low wages.

Compared to other countries where Erceg has played, New Zealand’s treatment and compensation of its players is severely lacking. Erceg claims that in other countries, her team has provided lodging, transportation, equipment, food and sponsorships all provided by the team, with extra compensation in return for publicity on the team’s behalf. This has allowed her to essentially put her salary into savings for her return to New Zealand during the offseasons. However, since some of her teammates are not as fortunate as to play overseas in similar conditions, Erceg claims there is an increasing gap between the top players and the rest.

“We’ve now left half of the team here who haven’t been as fortunate with those circumstances so the stresses of living have now had an impact on their performance as a player…we get this gap within the team, where the ability of the professional players obviously can’t be met with half the team who haven’t been able train at that level.”

In response to Erceg’s statements, New Zealand Football released a statement in which CEO Andy Martin said, “First and foremost we are sad to see Abby finish her international career. She has been an integral part of the Ferns for the past decade and the captain for the past four years. She has taken the team to the Olympic Games, FIFA World Cups and will be remembered as one of the legends of the game.”

Martin then addressed Erceg’s statements regarding “a perceived lack of funding and resource” by saying, “The Ferns have gone from strength to strength in recent years and their funding leading into the Rio Olympic Games was the most it has ever been. The team has had significant opportunities–and will do going forward–to be at their best and compete with the best teams in the world at pinnacle events.

The organization’s statement also reported that in December they had secured a three-year $1.5 million investment towards their 2019 World Cup and 2020 Olympic campaigns. However, the statement did not specifically address player wages.

Erceg debuted for the Football Ferns in 2006 and since has earned 130 caps and scored 6 goals. She played in six international tournaments for New Zealand, including two World Cups and three Olympics.

Despite retiring from international competition, Erceg will continue playing at the club level. Erceg currently plays for North Carolina Courage after playing with the Western New York Flash in 2016, where she won a NWSL Championship. Before that she played for two seasons in Chicago before being sent to Western New York in the 2015 offseason in the trade that initially sent Whitney Engen to the Chicago Red Stars.

Due to the unfortunate and unfavourable circumstances within the organisation that is nzf, it is with regret and great sadness that today is the day that I announce my retirement from the international game. Without being able to justify my involvement any longer I will be stepping back in the hopes to create change for the current and future generations of nz footballers. I will continue to enjoy a professional career at a club level which I still find great joy in and I look forward to taking on that endeavour in the coming years. I have encountered many personal successes within the international environment and it is sad that this is what’s required to adopt change. I say thank you to anyone involved in my international career no matter how big or small your role was, you have helped achieve the successes that I have been so fortunate to find. Time to move on to places where female footballers are appreciated, respected and endorsed. I hope that nzf one day has this philosophy.

Monday Roundup: Lauren Holiday opens up about brain surgery, recovery
USWNT looks to be heading to Norway for friendly