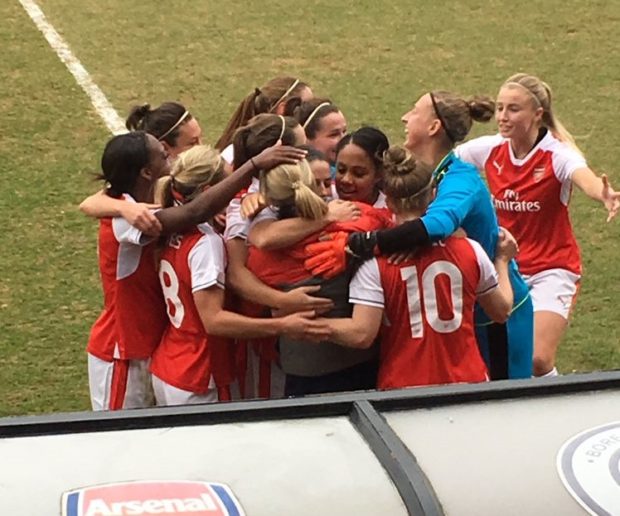 Kelly Smith, with the blonde ponytail and hands on her back, gets mobbed by Arsenal teammates during her retirement match on Sunday (photo by Kieran Theivam)

One day after a wide-ranging interview in the Daily Mail included news that Kelly Smith had married her partner DeAnna with whom she is expecting her first child, the usually reserved Smith was the center of attention during a tribute match to her career, which she called to a halt last month. Arsenal prevailed 4-2 over the All-Star XI that included former England manager Hope Powell. But the match was more about celebrating Smith than worrying about the score.

Smith’s recent announcement that she was pregnant came with news that she would be unable to suit up for her own tribute match. But when the All-Star XI, who she was managing, won a penalty the crowd chanted for Smith to take it. She happily obliged and with little resistance from Sari van Veenedaal, converted in the final touch of her illustrious soccer career.

Another popular moment came when Kim Little put Arsenal on top and the entire team raced to the sideline to celebrate with Smith.

Smith’s career made her a star on two continents. She played for Seton Hall and was part of two professional leagues in the United States. In her native England she helped give rise to the national team which once struggled to qualify for major tournaments but finished 3rd at the most recent World Cup.

Stay tuned for more coverage from the match…