Also in today’s roundup, Karina LeBlanc to speak at FIFA Equality Conference, more injury woes for Germany and news from the NCAA ranks

Jane Campbell was set off for DOGSO during her senior season at Stanford. A new rules proposal could have spared her the red card in favor of a yellow. (Photo Copyright Steve Bruno for The Equalizer)

The NCAA could ease up on double jeopardy rules in place when a player commits a foul denying an obvious goal scoring opportunity (DOGSO). Currently when such instances happen in the penalty area, the offending player is sent off while the attacking team is awarded a penalty. The proposal by the NCAA Men’s and Women’s Soccer Rules Committee is to give the referee the option to show a yellow card rather than an automatic red if the defending player makes a legitimate attempt on the ball.

Other proposals are to allow the ball to move in any direction on kickoff and that on a restart the ball has to clearly move forward.

The NCAA Playing Rules Oversight Panel is due to meet later in the month to discuss the suggestions.

Karina LeBlanc to speak at FIFA’s quality and inclusion conference 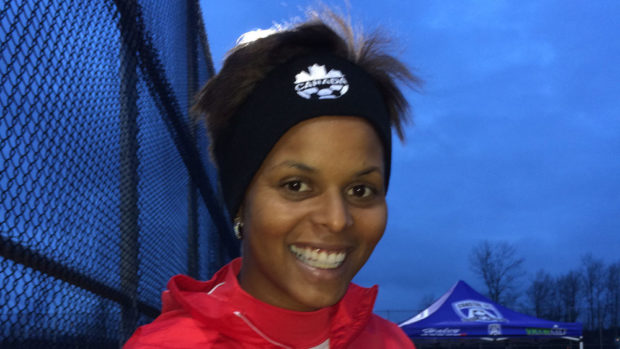 Karina LeBlanc will appear at FIFA’s Quality and Inclusion Conference on March 6.

Longtime Canadian goalkeeper Karina LeBlanc has been named as a speaker at FIFA’s Quality and Inclusion Conference slated for March 6 in Zurich, Switzerland. Other speakers announced via the FIFA Women’s World Cup Twitter account include Lakshmi Puri, Thomas Hitzlsperger and Clarence Seedorf.

LeBlanc spent 18 years with Canada during which she earned 110 caps and an Olympic bronze medal in 2012. She was also a mainstay on the women’s pro circuit playing for the Boston Breakers in WUSA; the Los Angeles Sol, Philadelphia Independence and magicJack in WPS; and the Thorns and Red Stars in NWSL. LeBlanc was the regular keeper for the 2009 WPS Shield winning Sol and the 2013 NWSL Champion Thorns. She is one of only two goalkeepers (Hope Solo) to appear in all three leagues.

Hitzlsperger made 52 appearances for the German men’s national team including an appearance in the 2006 World Cup. Seedorf owns 87 caps for the Netherlands and represented the Orange at the 1998 World Cup but is perhaps more famous as the only man to win the UEFA Champions League for three different clubs. Puri is the Assistant Secretary-General for Intergovernmental Support and Strategic Partnerships at the United Nations Entity for Gender Equality and the Empowerment of Women.

Kamme, Huth out of SheBelieves for Germany

Tabea Kamme and Svenja Huth will both miss the SheBelieves Cup after suffering knee injuries. Germany was already dealing with injuries to
Lena Goeßling, Simone Laudehr, and Melanie Leupolz. The team is also adjusting to life without the retired Melanie Behringer plus the transition from Sylvia Neid to new head coach Steffi Jones.

{MORE: USWNT to host Russia for two matches in April}

German journalist Jasmina Schweimler reported the news via Twitter. Kamme has a torn meniscus according to Schweimler and Huth is also dealing with knee issues.

Jenny Bindon has been named to Amanda Cromwell’s coaching staff at UCLA. Formerly Jenny Bourn, Bindon was a multi-sport star at Southern Illinois University and made 77 appearances in goal for the New Zealand national team. She was on the roster for two World Cups and two Olympics including the 2012 Games in London, where she was the oldest player in the competition. At 39, Bindon played every minute for New Zealand, who made it out of group play before losing 2-0 to the United States in the quarterfinals.

Bindon made herself available for the 2009 WPS draft but was not selected and never played in the league.

Shannon McCarthy, who played collegiately at the University of Miami, has signed to play professionally for FC Charme in Japan. McCarthy, a defender, was a fifth-year senior at Miami last season.

“God put the goal of playing professional soccer in my heart at a very young age and has blessed me with the gifts necessary to be able to achieve that, so I want to praise and thank Him for this opportunity,” McCarthy told hurricanesports.com. “It is surreal to have achieved a goal that I’ve had my entire life.”

For Miami, McCarthy scored 1 goal and tallied 8 assists over 72 games played. In her final college game, she played all 110 minutes and assisted on Miami’s only goal. She also converted her spot kick, but Miami lost in penalties to Clemson in the ACC tournament. She later declared for the NWSL draft but was not selected.

USWNT to host Russia, April 6 and 9 in Texas
Players, fans turn out to honor Kelly Smith