U.S. Soccer released The Red Kit. The women will be first to wear it, March 1 in the SheBelieves Cup opener against Germany.

U.S. Soccer picked a few minutes after the bewitching hour for the East Coast to drop their new third kits. The “Red Kit,” which the USWNT will debut at the SheBelieves Cup in two weeks, is a monochromatic version of the the team’s current home and away kits. The brilliant red jersey features dark red sleeves and includes a black stripe down the side that continues down the shorts. The front has the traditional Nike swoosh over the right breast and the U.S. Soccer crest–simplified in a red-and-white design–above the left. The women’s version includes the three stars representing the team’s three World Cup victories and the FIFA World Cup victory patch in the center.

From the U.S. Soccer article about the new jerseys.

U.S. Soccer and Nike have unveiled the new 2017 U.S. National Team kit, featuring a bold red color palette with the lightweight mobility and engineered breathability of Nike AeroSwift technology.
With the pervasive red aesthetic, the U.S. National Teams will feature in a core color of the United States flag as they embark on an exciting and important year of competitive international competitions.

Similar to the current home jersey, the red jersey is adorned with several patriotic flares throughout the material, including “1 Nation” and “1 Team” on the inside cuffs of the sleeve, in addition to “USA” displayed on the neckline. The slim cut provides a distraction-free fit while preserving range of motion. The USA crest and the Swoosh logo are heat transferred for a flexible, breathable finish that does not interfere with athlete performance.

The first SheBelieves Cup match is March 1 against Germany. The men will debut the kit in a World Cup qualifier against Honduras on March 24.

An ode to Colleen Hacker and the ’96 gold medal team

U.S. Olympic Team, the Twitter account dedicated to all things Team USA across all Olympic sports, released a nine-minute video about the dawn of the Colleen Hacker era. Tony DiCicco hired Hacker as the national team’s sports psychologist in the aftermath of a painful loss to Norway in the 1995 World Cup semifinal.

“It was one of the great strengths of our coach Tony DiCicco in bringing Dr Hacker in,” Mia Hamm says in the video. “He knew that motivation wasn’t his strength.”

The @ussoccer_wnt had a secret weapon heading into the 1996 Olympic Games! Find out who it was in this @olympicchannel video! ⚽️ pic.twitter.com/Mcuu2KOXD8

With help from Hamm, Hacker discusses the elements that helped her instill confidence in the team as they embarked on the first Olympic competition for women, in front of their home fans, in 1996. The video opens with Hamm recalling a 1-0 deficit to Norway in the semifinals but saying that in the locker room, “you would have thought we were winning 3-0.” The U.S. eventually won that match in sudden death extra time and then defeated China for the gold medal.

Hacker talks about not going in with a set plan but wanting to get to know the players first before trying to build their confidence. Hamm speaks of trust walks where players had to guide blindfolded teammates down hills without being allowed to use hands.

In his book Girls of Summer Jere Longman discusses Hacker’s deft handling of a lawsuit filed by former player Debbie Keller that threatened to hang a dark cloud over the 1999 World Cup.

Lena Goeßling is out six weeks after ankle surgery, putting her participation in Wolfsburg’s quarterfinal Champions League tie against Lyon in jeopardy. The UWCL Twitter account broke the news. Also mentioned is a knee injury to Zsanett Jakabfi whose timeframe seems less certain.

Goeßling, who will be 31 on the other side of the SheBelieves Cup, was left off Germany’s roster for the U.S. tournament. Wolfsburg opens its home-and-home quarterfinal tie with Lyon on March 23 at AOK Stadium. The return leg, March 29 in France, is exactly six weeks in the offing.

Belgium has announced a 24-woman roster ahead of next month’s Cyprus Cup. The Belgians will be longshots in a group against Italy, South Korea, and Switzerland. Janice Cayman, who played briefly for the Western New York Flash last season, is in the squad. The full roster of 24 is: 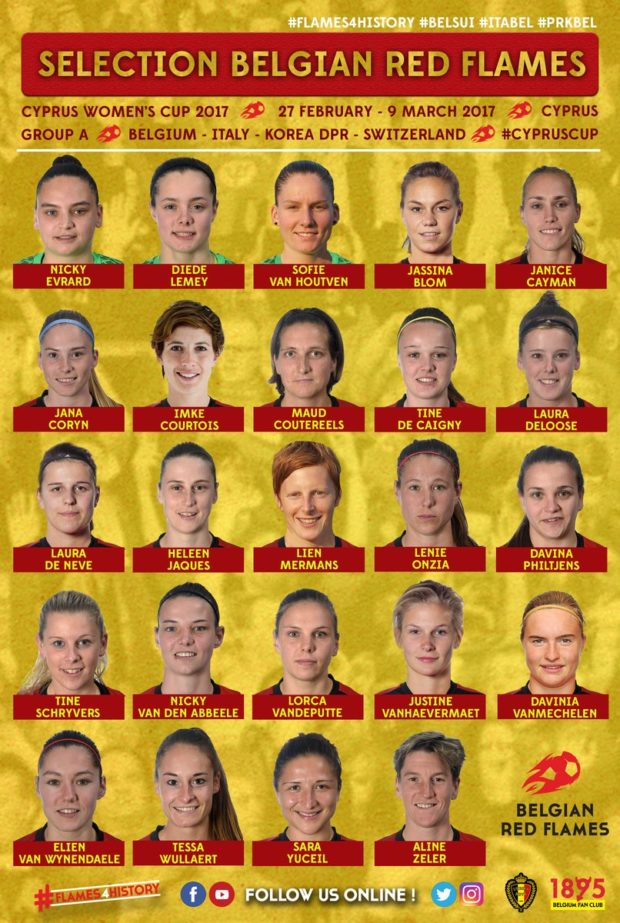 Waldrum: Dash “not built around any one player”
Thursday roundup: US Soccer names Hickey as Director of Girls’ Development Academy