Waldrum: Dash “not built around any one player” 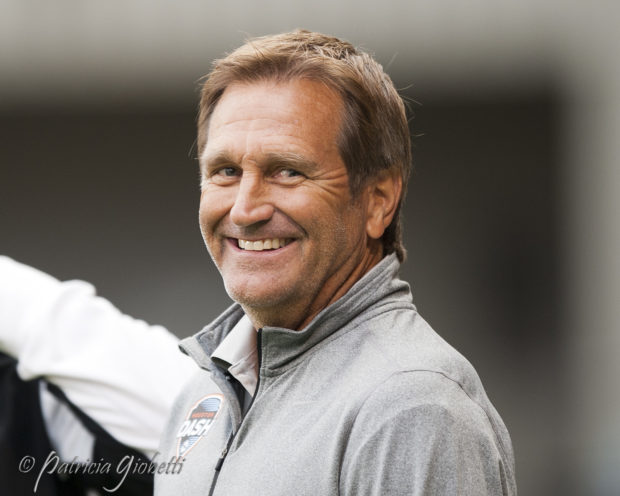 Randy Waldrum says the Dash are not built around any one player. (Photo Copyright Patti Giobetti for The Equalizer)

Houston Dash head coach Randy Waldrum said that Carli Lloyd informed him over the weekend of her desire to pursue an opportunity with Manchester City Women who officially announced Lloyd on Wednesday. Waldrum said he wished Lloyd the best in her pursuit of a Champions League title in a press release from the club that stated she will return in June.

“I’m disappointed that she will not be with the team as we start the season, but I wished her all the best with her decision,” Waldrum said. “Our team is not built around any one player, so nothing will change with regards to our goals and expectations for our team.”

The Dash have yet to reach the playoffs since entering NWSL as an expansion side in 2014. They acquired Lloyd ahead of the 2015 season and while she has been productive–9 goals and 3 assists in 19 matches–she has played less than half of the Dash matches since joining the squad. In 2016, Lloyd hurt her knee in the second game of the season and did not play again until after the Olympics.

In an effort to crash into the top four, Waldrum acquired defenders Bruno and Janine Van Wyk in an effort to shore things up in back. They will also hope Kealia Ohai can be closer to her second half self than her first from last season. Ohai scored all 11 of her goals during the final 10 matches of the season.

Said Waldrum: “We have a great roster with many international and domestic stars such as Kealia Ohai, Morgan Brian, Andressa, Rachel Daly, Janine Beckie and Denise O’Sullivan, just to name a few, who are committed to preparing for the start of the Dash season and who are more than ready to get back on the pitch and begin our quest to win an NWSL title. I am excited about this team and look forward to working with the talented group that I’ll go into camp with.”