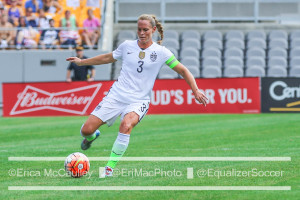 Former USWNT captain Christie Rampone will be honored for her international career before the USWNT’s match against England on March 4. (Photo Copyright Erica McCaulley for The Equalizer)

U.S. Soccer announced on Monday that it will be honoring former captain Christie Rampone’s career during the New Jersey leg of the SheBelieves Cup. The pregame ceremony will be held before the USWNT plays England on March 4 at Red Bull Arena in New Jersey.

“I really couldn’t have asked for more from my career with the national team, not only on the field but also in the relationships I made and the life experiences I was fortunate enough to have,” Rampone said. “As a young girl, I never imagined the things I would get to see and the amazing people I would meet. I’m looking forward to celebrating with friends and family in my home state and seeing the team play England. There are some fantastic young players as well as many of the veterans I played with leading the team, so I know it’s in very good hands.”

The New Jersey native is the second-most capped player in international soccer history with 311, trailing only USWNT teammate Kristine Lilly (354), and is the last of the legendary 99ers to retire from international play. In her 19-year career with the national team, the defender has won two World Cups, three Olympic gold medals and an Olympic silver. She became the oldest woman to play in a World Cup final when, at 40 years old, she subbed into the USWNT’s match against Japan in July 2015. She scored four goals over the course of her career and was named captain by Pia Sundhage in 2008.

“Christie Rampone is a fantastic role model as a teammate, a professional and a mom,” USWNT head coach Jill Ellis said. “She was always humble and always focused on the team first. She was a great leader and competitor for this team for so many years, and her contributions to women’s soccer on many levels will always be remembered and appreciated. One of my best memories from the 2015 World Cup was seeing Christie on the field at the final whistle. It was so appropriate for her to finish as a champion because that’s what she truly is.”

Her last match played for the USWNT came on September 20, 2015 in the USWNT’s World Cup victory tour match against Haiti in Birmingham, Ala. Rampone played the full 90 minutes and wore the captain’s armband for the final time while helping the U.S. secure an 8-0 shutout over the Caribbean nation.

Rampone did not dress for the remainder of the Victory Tour and did not travel for two of the December 2015 matches as she recovered from a knee injury. She underwent arthroscopic knee surgery shortly around Christmastime, which kept her away from the national team until Ellis invited her into camp in May 2016. Rampone declined the invitation, though, claiming she was not yet recovered to the caliber required of international competition, signaling to many the end of her international career.

Monday’s announcement confirms statements made by USSF President Sunil Gulati at the NWSL and A+E Networks joint press conference in his introduction to Rampone, who spoke at the event.

“I haven’t seen Christie in quite a while because she retired from the national team,” Gulati said. “But she’s still playing and we’re going to honor her in about a month at a game.”

Although Rampone has now officially retired from international competition, the last of the legendary 99ers to do so, she will continue playing at the club level with Sky Blue FC in the team’s fifth NWSL season. She has played every season of professional soccer in the U.S. and stands to be the only WUSA alumni to lace it up in the NWSL this season.