Megan Rapinoe took kneeling for the National Anthem into the women’s soccer world.

Megan Rapinoe was one of several athletes featured in a new commercial by Nike promoting equality in sports. The commercial shows athletes of various sports and different races, genders and sexual orientations—including Lebron James, Serena Williams, Victor Cruz and Gabby Douglass—redrawing the lines of their sports while a voice over extols the virtue of sports as a place where equality can, and should, thrive.

“Equality should have no boundaries. The bond between payers should exist between people. Opportunity should be indiscriminate. Worth should outshine color. The ball should bounce the same for everyone. If we can be equals here, we can be equals everywhere,” the narrator says.

The black-and-white commercial shows Rapinoe squatting in front of a group of women playing soccer in the background. Her inclusion and posture in the ad is no doubt a reference to her making national headlines after kneeling during the playing of the national anthem first with her club, Seattle Reign FC, and then with the United States women’s national team.

When asked about the action after kneeling before the Reign’s September 4 road match against the Chicago Red Stars, Rapinoe said it was a “nod to [Colin] Kaepernick,” referencing the San Francisco 49er quarterback who knelt during the national anthem in protest of the racial injustice and inequalities of African Americans in the United States.

“Being a gay American, I know what it means to look at the flag and not have it protect all of your liberties,” she told reporters. “It’s important to have white people stand in support of people of color on this. We don’t’ need to be the leading voice, of course, but standing in support of them is something that’s really powerful.”

Rapinoe faced backlash for kneeling before national team matches since she was representing her country, and her recent omission from the 2017 SheBelieves Cup camp roster had some fans speculating it had more to do with her recent off-field political statements than with anything on the field. However, USWNT head coach Jill Ellis has refuted those rumors, telling Julie Foudy that Rapinoe’s recovery from ACL surgery and resulting match fitness were the reasons.

The Boston Breakers announced on Monday that they have re-signed English international Natasha Dowie pending receipt of her P-1 Visa and International Transfer Certificate.

Dowie, 28, first joined the Breakers following the 2016 Olympic window and immediately began making an impact for the struggling club, scoring the game-winning goal in her debut, a 1-0 win over the Orlando Pride on July 31. She started in all seven matches in which she appeared, logging 605 minutes and leading the team in goals scored with three.

“I’m delighted to be joining back up with the Boston Breakers,” Dowie said. “I really enjoyed my short spell there at the end of last season. There has (sic) been some strong additions to the squad, and I can’t wait for training to start.”

The forward is coming off her season with Melbourne Victory of the Westfield W-League in Australia, where she set a franchise record of nine goals scored in a season. She was named to the PFA Jetts W-League Team of the Season for her accomplishments.

“It was important to tie Natasha down after her impact she made last season on a struggling team” Breakers head coach Matt Beard said. “One thing I know she will do is score goals. I’m excited to see how she links up with the attacking players we have signed this offseason.”

Beard previously coached Dowie at Liverpool Ladies FC, where she played for three seasons (2012-2015). There, she scored 45 goasl in 42 games. She was named to the FA Players Player of the Year in 2013 after leading Liverpool to its first FA Women’s Super League title.Dowie also has 14 caps with England’s women’s national team after debuting at the international level in 2009.

Frederica Academy honored alumna Morgan Brian on Friday, February 10 by retiring her no. 2 jersey in a ceremony at the school. The St. Simons Island native is the first athlete to ever have her jersey retired at the school and was surprised by the honor, telling the Golden Isles News that she simply thought she was going to be one of four people getting inducted into the school’s Hall of Fame.

“To have a jersey retired is a special moment,” Brian said at the ceremony. “I think I will remember this for the rest of my life just because St. Simons is such an important place and holds a special place in my heart. Now I think it will be even more special knowing that my jersey was retired. This is a school who made me who I am.” 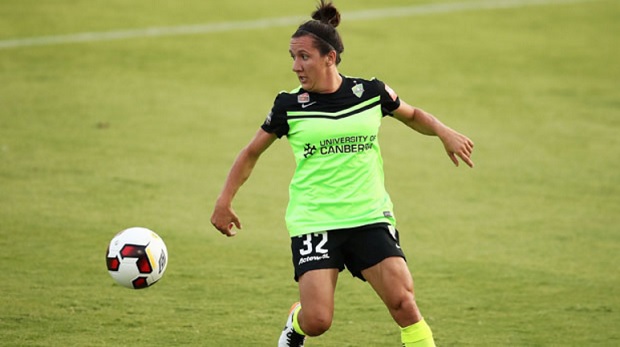 In around the 109th minute of the match, De Vanna ran up behind City player-coach Jess Fishlock and shouldered the midfielder, knocking Fishlock to the ground. Although the referee did not see the foul committed, the matter has since been referred to the independent Disciplinary and Ethics Committee for a hearing. The hearing will decide if any offense was committed and, if so, what sanction should be imposed.

De Vanna has earned a reputation as a troublemaker on and off the field throughout her career. In 2014, she was left at home while the Washington Spirit traveled to Seattle to take on the Reign in the NWSL semifinals.

“She’s a fiery player, everyone in the game knows that. She wants to win,” Mark Parsons, then head coach of the Washington Spirit, said of his decision to not allow De Vanna to travel with the team. “Unfortunately we made a decision that we won’t include her. Those reasons are making the best decision for the team, for this game, and the rest of the playoffs.” The Spirit lost that match, 2-1.

Similar behavior at the international level have gone so far as to cause her to be expelled from Australia WNT training camp before the 2011 World Cup. Despite previous incidents with the team, she has since been named co-captain of the Matildas and was just named to the team’s 2017 Algarve Cup camp roster.