Sam Kerr will lead Australia into the Algarve Cup next month. (Getty Images)

Just a day after the Australian W-League crowned Melbourne City as the Grand Final Champions, the Australia women’s national team released its roster for the upcoming Algarve Cup tournament camp. The roster currently consists of 25 players who will participate in a three-day camp at the AIS in Canberra that begins on Wednesday, February 15. Following that camp, the roster will be reduced to just 20 players who will then participate in another three-day camp in Sydney’s west starting on February 20. The final Algarve roster is due Februay 23 and should include Emily Van Egmond and Elise Kellond-Knight, both currently playing in Germany.

NWSL fans will notice the omission of Laura Alleway, defender for Orlando Pride who just won a W-League championship with Melbourne City, from the roster while Hayley Raso of the Portland Thorns was named to it after not making the team’s 2016 Olympic roster. Larissa Crummer, who recently signed with Seattle Reign, was excluded from the roster after fracturing her foot while with Melbourne City although Michelle Heyman, who missed the last couple games with Canberra United with an ankle injury, is on it.

Head coach Alen Stajcic also included three uncapped and two capped teenagers on the roster after evaluating their performance during the recently-ended W-League season and in the underage national level. The five teens are Ellie Carpenter (16) who currently has five appearances for the Matildas, Alex Chidiac (18) who has one appearance, and Grace Maher (17), Jacynta Galabadaarachchi (15) and Jada Mathyssen-Whyman (17) who are all uncapped.

“We are now heading into a new four year cycle…so we’re looking at what kind of team we can take to qualify for the major tournaments, starting with the Asian Cup next year,” Stajcic said about the infusion of youth into the roster. “The biggest objective of this camp and one of the major factors in the squad we’ve selected is building the depth of the team and increasing competition within the team and giving more players the experience of being in a Matildas camp and playing senior international football.”

Not only are their new faces on the roster, but on the coaching staff as well. Former Matilda and current Sydney University head coach Heather Garriock will be joining assistant coach Gary von Egmond for the team’s two training camps and the Algarve Cup, the first of a rotation of aspiring female coaches to the national team coaching staff. 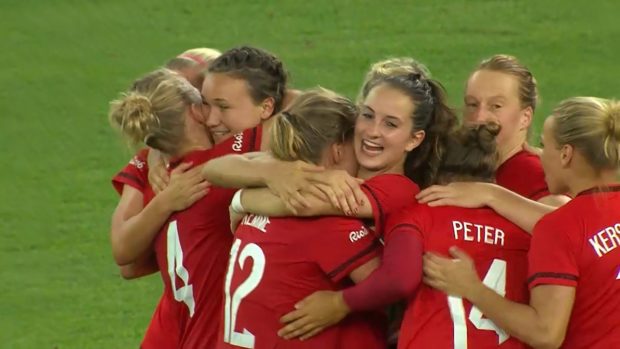 Olympic champion Germany will be missing several key players for the trip to the United States for the SheBelieves Cup. The Germans first tournament of the Steffi Jones era will not include Lena Goeßling Simone Laudehr or Melanie Leupolz. However Jones will have Sara Däbritz who is recovered from a knee injury. Jones is in her first full season coaching Germany after ascending to the top position on the retirement of Sylvia Neid following the Olympics.

Fresh off winning the W-League as player/coach for Melbourne City FC, Jess Fishlock leads Jayne Ludlow’s side that will represent Wales in the Cyprus Cup next month. The full roster:

After opening 2017 by defeating Sweden and England in friendly matches, Norway will look to take momentum to Portugal for the Algarve Cup. Here is the roster Martin Sjögren will take to the annual tournament:

New Ireland boss Colin Bell has called 20 players in for the Cyprus Cup. It is Bell’s first team since taking over as head coach for Sue Ronan. The team: