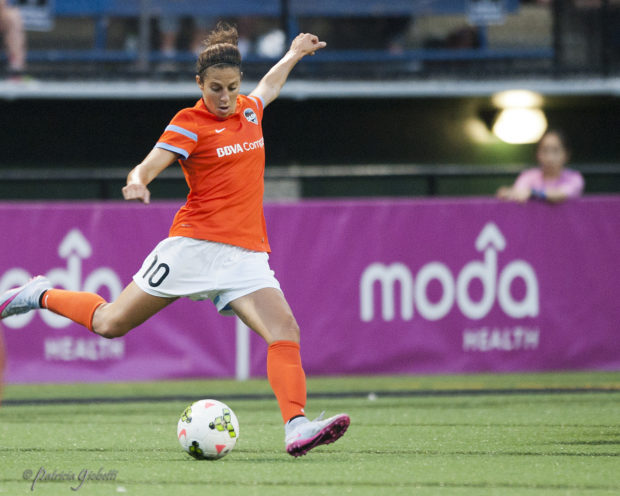 The women’s soccer corners of social media were abuzz on Friday with multiple outlets reporting the two-time running FIFA Player of the Year had agreed to a contract with Manchester City Women in the FAWSL. Here is where we stand with things heading into the weekend.

The fun started when Henry Winter of Times Sport suggested that Lloyd and Manchester City might be close to doing business. Andrew Gibney, a Manchester-based freelancer, acting on Winters’s original report, made some calls and reported that Lloyd was definitely going to Manchester City and that the deal was done.

A few hours later, Charles Boehm of soccerwire.com matched Gibney’s report that a deal was done. Boehm’s report added that an announcement is expected sometime next week.

Done some digging. As I understand it, @CarliLloyd to @ManCityWomen is happening. Deal already done. Huge statement from #MCWFC

On Saturday, Corey Roepken of The Houston Chronicle released some of his reporting indicating not only is there no deal in place but that no offer has been made. Roepken added that Lloyd would consider any offers from the FAWSL champions.

Sources tell me reports of Carli Lloyd heading to Manchester City are premature. No offer has been extended, but Carli would consider.

Although Jonathan Tannenwald of philly.com reported on Friday that he spoke to a source that indicated no deal had been finalized between Lloyd and Manchester City. However, he reported on Sunday that he has gotten word that Manchester City has since made an offer to Lloyd. Tannenwald’s tweets suggests that, while earlier reports may have been premature, there may be validity behind them now.

Just got word that Carli Lloyd now has a contract offer from Manchester City and is likely to accept it: https://t.co/5E5UHF7k2C

Reached by The Equalizer on Friday, the Houston Dash had no comment on the reports.

Lloyd has been at least loosely linked with the FAWSL since shortly after the 2015 World Cup when she told the BBC that she would not be opposed to a move to England. Complicating matters is the lack of a collective bargaining agreement between the United States national team players and US Soccer. Lloyd has been a subsidized player all four seasons of NWSL, and with neither a CBA nor a list of subsidized players for 2017, Lloyd and her teammates appear to be technically out of contract on the club level.

Since December, Alex Morgan (Lyon), Crystal Dunn (Chelsea) and Heather O’Reilly (Arsenal) have joined prominent European clubs. Morgan has publicly stated she will be back in Orlando after Lyon’s season and FC Kansas City is expecting O’Reilly back as well, but neither are bound by the terms of their contracts. Dunn has made it clear she is not playing in NWSL this season.