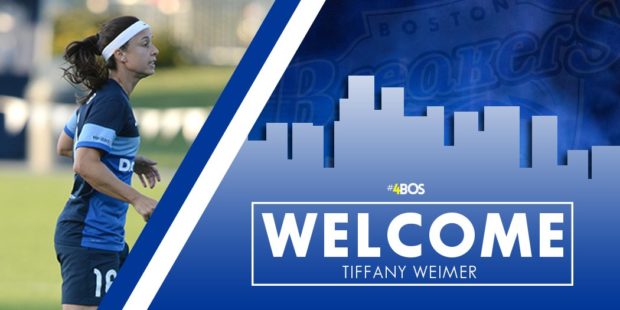 Tiffany Weimer played for the Breakers in WPS back in 2010. She’s heading back for the 2017 season. (photo: Boston Breakers)

The Boston Breakers continued their roster overhaul on Thursday by signing Tiffany Weimer. The 33-year old striker has been knocking around the professional scene since she was drafted to FC Gold Pride ahead of the inaugural WPS season in 2009. She previously played for the Breakers in 2010, making eight appearances. Weimer spent some time in 2016 with FC Kansas City before leaving to play for Kvarnsvedens IK in Sweden.

“I’ve had some great conversations with Tiffany, and she’s hungry to come back to Boston and the NWSL,” Breakers head coach Matt Beard said. “She’s gone away and had a great season in Sweden, and she will be another great addition to our team. She is a technically gifted player with a good soccer brain, and I’m looking forward to bringing Tiffany back to the Boston Breakers.”

In NWSL, Weimer spent 2013 in Portland and the next two in Washington. Her best day as a pro was the 2013 semifinal when she scored the 65th minute equalizer for the Thorns against FC Kansas City just nine minutes after entering the match. She later assisted on Allie Long’s extra time winner. The Thorns trailed 2-0 after 25 minutes that day. A week later they beat the Flash to win the inaugural NWSL Championship. Weimer did not play in the final.

Weimer is also the founder of Our Game Magazine.

The Breakers have finished at the bottom of NWSL two years running and Beard has overhauled all three lines of field play in hopes of the club rising up the table. They are the only one of the league’s original clubs that has never qualified for the playoffs.