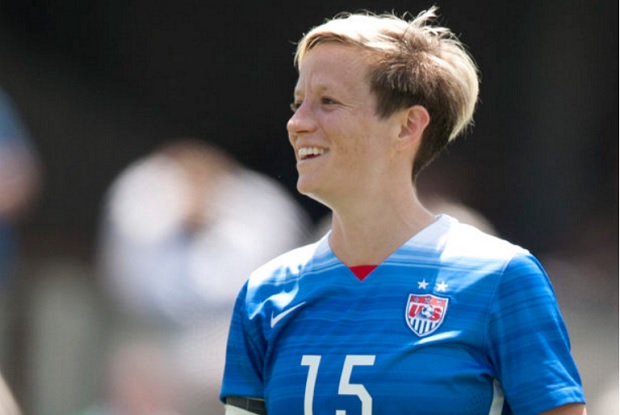 Megan Rapinoe was left off the 2017 SheBelieves Camp roster, and Julie Foudy knows why. (Photo Copyright Patricia Giobetti for The Equalizer)

On Wednesday, U.S. Soccer released the list of 25 players that Jill Ellis had called into camp leading into the second annual SheBelieves Cup. While the roster presented few surprises, there was one glaring omission: Megan Rapinoe.

Julie Foudy tweeted that she spoke with Ellis regarding Rapinoe’s omission from the latest roster. Ellis told her, “We have lots of depth in wide areas with [Mallory] Pugh and [Meghan] Klingenberg back in the mix. I told Megan she just needs time [to] work her way back in and to get game fit. This is a marathon, not a sprint.”

1/2 I spoke to Ellis today abt Rapinoe not on roster. She said "We have lots of depth in wide areas w Pugh & Klingenberg back in the mix… https://t.co/2EsaDNaL1e

Those statements suggest that Rapinoe, who tore her ACL in December 2015, may not be back to 100% after suffering that injury. Despite Ellis’s current assessment of Rapinoe’s recovery and match fitness, the midfielder returned to the team in time to be named to the 2016 Olympic roster, but not without controversy.

Rapinoe was unavailable to play until the second match of Olympic group play, starting and playing 33 minutes in the U.S.’s 2-2 draw with Colombia. She subbed in in the 72nd minute of the quarterfinal loss to Sweden, only to be subbed out in the 99th minute. She has since been invited to every USWNT training camp since with the exception of the team’s October camp. 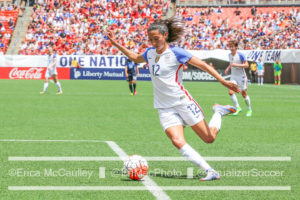 The USWNT, along with Canada and Sweden, recently scheduled an April friendly. (Photo Copyright Erica McCaulley for The Equalizer)

In his Tuesday Kickaround, Washington Post reporter Steven Goff reported that the USWNT had scheduled an international friendly for Sunday, April 9, and that ESPN had blocked off a two-hour window during which to air the match. No opponent was named.

Although the match will take place the weekend before the start of the NWSL season, it is unsurprising since there is a FIFA window for international friendlies or competition from April 3-11. Fans hoping that national team players would be pulled away from their NWSL clubs less in 2017 since it’s not a major tournament year are sure to be disappointed, as Jill Ellis stated earlier this year that one of the goals for 2017 was “to play the best teams in the world as often as possible.”

Two opponents that are definitely out for the U.S.’s April friendly are Canada and Sweden, as Sweden announced on Wednesday that the two will be playing in their own friendly on April 6 at Trelleborg on Vångavallen. The meeting will be the 20th competition between the two sides.

Nadia Nadim (right) was not named to Denmark’s Algarve Cup roster as she continues recovering from ACL surgery. (Photo: UEFA)

While the USWNT will be hosting the SheBelieves Cup, the 24th edition of the Algarve Cup will be held in the Algarve region of Portugal. The tournament consists of 12 teams divided into three groups, with group play kicking off on March 1. Two teams competing in this year’s Cup, Sweden and Denmark, released their rosters for the international tournament earlier Wednesday.

The Algarve Cup allows for 23 players per side, but Denmark’s roster is currently two players shy as head coach Nil Nielsen tries to fill vacancies, one of which was left by Nadia Nadim. Nadim tore her lateral collateral ligament (LCL) during the Portland Thorns’ semifinal loss to the Western New York Flash on October 2. Nadim underwent surgery to repair the tear, and has reportedly recently begun training with a ball again. Missing from Pia Sundhage’s Sweden roster is Montpellier HSC forward Sofia Jakobsson, who suffered a torn ACL last week.

Houston Soccer Head Coach Diego Bocanegra announced last week that Danesha Adams had been hired on as an assistant coach for the 2017 season. Adams joins Houston after one season coaching at Villanova.

“With such an accomplished collegiate and professional playing career, she serves as a great role model to our women,” Bocanegra said. “She has the ability to draw from these experiences and relate them to our student athletes.”

That accomplished collegiate career included leading UCLA to four NCAA College Cups, being a three-time Pac-10 Conference First Team selection, a two-time MAC Hermann Trophy finalist and a Pac-10 Player of the Year finalist. At UCLA she holds the school record for most points scored during NCAA Tournament play, with 41. During that time, Adams also represented the U.S. at the U-20, U-23 and senior WNT levels, earning her first cap with the full national team in 2006 against China, recording one assist in the match. She was named U.S. Soccer’s Young Female Athlete of the Year that same year.

Despite all of Adams’ accomplishments and accolades, her claim to professional soccer fame came in 2010 when she scored the semifinal-winning goal against the Boston Breakers to send the Philadelphia Independence to the WPS Championship. However, the goal was controversial as from one angle it appeared that her header deflected in off her left hand. From other angles, it looked to be a clean shot, but a sideline camera showed what appeared to be an obvious handball. The Breakers also thought it was a handball and stopped play, but the referee did not call the foul and, instead, ruled it a goal. Despite protests from Boston, the goal stood and the Independence would advance to the WPS Championship, where they ultimately fell to FC Gold Pride, 4-0.