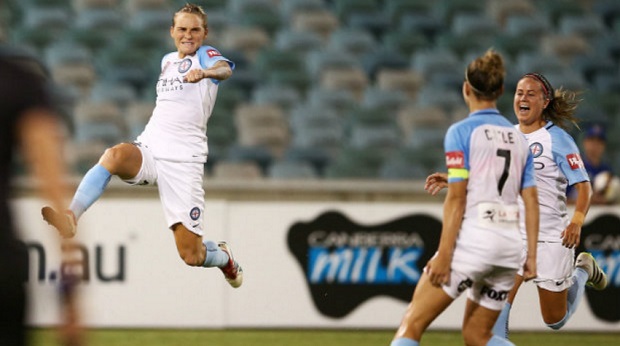 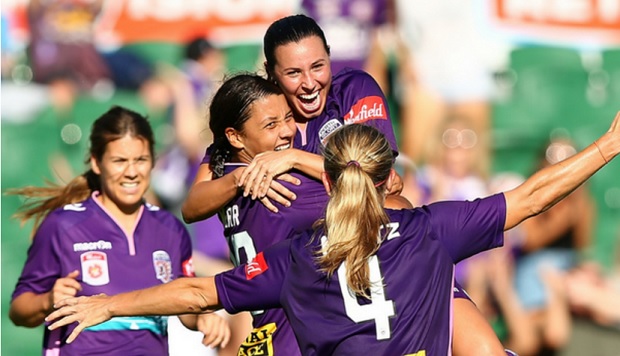 Perth Glory advanced to their second Westfield W-League Grand Final in three seasons with an emphatic 5-1 home victory over Sydney FC in front of 1,592 fans in NIB Stadium on Saturday, February 4. Perth Glory clinched second and the home playoff berth with virtually the final kick a week ago, with Caitlin Douglas (who did not play in the semifinal) scoring over Western Sydney Wanderers (1-0) in injury time. Sydney’s loss in Adelaide last weekend (5-2) saw the original Harbour City team surrender its hold on first and slip to third, having achieved only one point in their final three games.

In Perth, Kyah Simon (ex- Boston Breakers) scored first in the 23rd minute for Sydney FC, but Chicago Red Stars loanee Vanessa DiBernardo tied up the match nine minutes later from the penalty spot, after her Red Star teammate Alyssa Mautz was taken down in the box. Sydney FC defender Alanna Kennedy (North Carolina Courage) scored an own goal near the hour mark—her mishit clearance went over the head of Sydney goalkeeper Claire Coelho and into the net—to give Perth a lead it would never relinquish. DiBernardo, Rosie Sutton and substitute defender and six-year Glory veteran Shawn Billam scored late goals to seal the win for the Western Australian side. Sutton scored her seventh goal of the season, while Di Bernardo has six and Billam scored her first of the campaign.

For the second straight year, Melbourne City had to go extra time in a semifinal to advance to its second Grand Final in two years, defeating 2016/17 Premiership winners Canberra United 1-0 on Jess Fishlock’s goal before a season high crowd of 5,072 in the Australian capital city on Sunday, February 5. Fishlock was promoted from assistant coach last month to manager when former manager Joe Montemurro took an assistant’s position with City’s men’s A-League side. Montermurro, who played in the National Soccer League in Australia and for minor league sides in Italy, won the Grand Final last season in charge of the City women’s side. Fishlock had two excellent chances in overtime, seeing her 100th-minute shot parried over the crossbar by Canberra goalkeeper Trudy Burke. Fishlock scored her seventh goal of the season seven minutes later, taking a deflected ball in the penalty box and slotting it home past Burke.

City will go to Perth next weekend for the Grand Final, which Perth will host for the second time in three seasons. The Glory lost to Canberra United 3-1 in their only previous Grand Final in 2014/15. City and the Glory played only once this season, with Perth winning away 3-2 in Round 8.