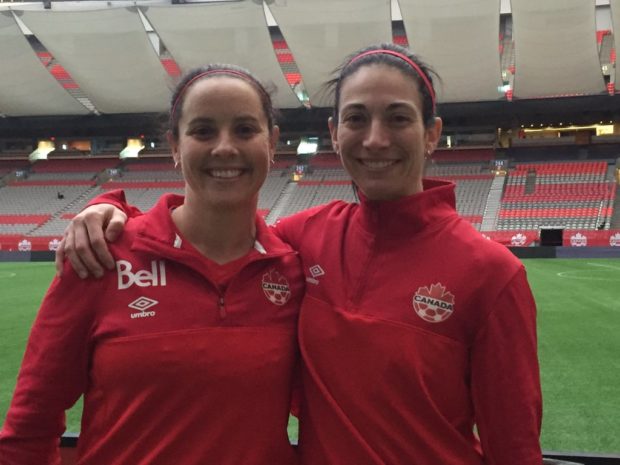 Rhian Wilkinson, left, nearly passed on Tennessee because she was afraid of Marie-Eve Nault (photo copyright Harjeet Johal for The Equalizer)

VANCOUVER, B.C – Imagine leaving your family, friends, and small town comfort zone to move to a different country to attend university. That’s what Rhian Wilkinson and Marie-Eve Nault both did when they enrolled at the University of Tennessee. Wilkinson wasn’t so sure about Nault, and she almost decided against going to Tennessee.

“I knew of her by reputation because she was a phenom in the Quebec Soccer League,” said Wilkinson. “I almost didn’t go to Tennessee because she was going there. I was terrified of her, yeah that’s a true story. I considered not going because Marie-Eve was going. I didn’t think I’d get seen, because she was so good. I’m so glad I changed my mind. She was my roommate for five years while we were there. She’s become one of my closest friends.”

It was an unfamiliar time for Nault as well. She also knew a little bit about Wilkinson, but not enough. Those initial steps of getting to know one another helped build a long-lasting friendship. First hand worries soon went out the window as both players adjusted.

“I was terrified of her as well,” said Nault. “I knew her because we played (against) each other for so long in Quebec. She was always really fast, she was just scary. We got to be roommates our freshman year in college, and I got to know her a little bit more. I’m lucky to have her as a friend now, even if I thought she was a bit scary at first.”

In those early days, it was Wilkinson who volunteered her services as an English tutor. Nault didn’t speak the language, and she could have easily fallen behind in her university studies and on the pitch.

“When I first got to Tennessee, I didn’t speak much English,” said Nault. “Good thing she was there. She helped me through a lot. She was helping me with what was going on in training, explaining what we were doing. At school, we had classes together. She was helping me a lot and making sure I wasn’t going to fall behind. She definitely helped me with English. Now that she’s helped me, she gets to laugh at me a little bit with the accent, but that’s all in good fun.”

Did Wilkinson do a good job as a language tutor?

“I helped her for the first semester of school,” revealed Wilkinson. “Then she started getting better grades than me. She actually started learning English with a Tennessee Southern drawl, so I will not take credit for the y’all she started pulling out. She’s clearly a fantastic student and a very quick learner linguistics wise.”

Nault will earn her 71st cap on Saturday vs Mexico, and Wilkinson will earn her 181st cap. Both players have been an integral part of the Canada back line, Wilkinson getting up and down the right side, and Nault patrolling the left side. It’s been a career full of many highlights, but one specific moment sticks out for both of them.

“2012, winning that bronze, was the highlight of my career,” said Wilkinson. “I’ve never felt anything like that in my life. Winning another bronze was clearly a close second. That group in 2012 were special to me. We’ve grown up together, and come through the system together.”

“I would say the highlight of my career would have to be London 2012,” said Nault. “It was such a big disappointment in 2011, we went through a lot. Coming back and getting John (Herdman) on board, that’s what the team needed. We stuck together, we really worked hard, and we believed in what we could do as a team. To finally get on that podium against the French, that was one of the best moments of my life.”

At the ages of 34, there’s still a lot of opportunities for both players to stay involved with soccer. They aren’t ready to sit back and enjoy retirement life. Wilkinson already has a new favorite hobby.

“My hobby knitting, nobody pays me for knitting, it’s terrible. I’ve loved my career, I’ve had an incredible fourteen years playing for Canada. I’m interested in coaching. I’m interested in many things, definitely coaching is something that I want to pursue. Whether that’s what I end up doing, we’ll see.”

Nault has returned to her home town of Trois-Rivières, a city on the banks of the Saint Lawrence River between Montreal and Quebec City. She wants to help the next generation of athletes achieve a dream that she was able to have.

“It’s a regional sports center,” said Nault, when asked about her new job. “I’m the coordinator with the athletes, with whatever they need. If they need a nutritionist, if they need a sports psychologist, anything they need to give them the best training environment possible to help them realize their dream.”

Canada Soccer is in a great position going forward to the next World Cup and Olympic cycle. Wilkinson and Nault have helped pave the way for the next generation. Kids across Canada have role models they can cheer for and one day aspire to be. Nault and Wilkinson both played with heart, strength, leadership, and determination.

What does Wilkinson hope she is remembered as?

“What I hope I’ll be remembered for is leaving it all out on the field, and just being so proud of wearing the jersey. I hope that, instead of me being remembered as a player, my legacy lives on in the players that come through the system. They can become as technical, and tactical as the years go by, but they can never lose that Canadian heart.”