At 18, how good is Jessie Fleming already? 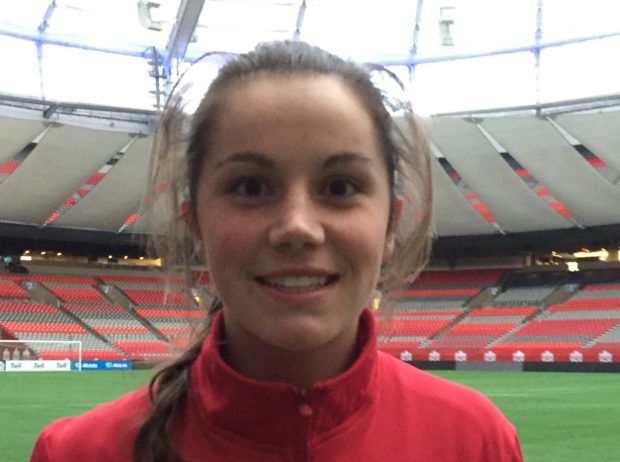 Jessie Fleming enjoyed a dominant freshman season at UCLA. It was so good that John Herdman says the college game is too easy for her. (photo copyright Harjeet Johal for The Equalizer)

VANCOUVER, B.C – Jessie Fleming is back with Canada Soccer after dazzling on the pitch with the UCLA Bruins as a freshman. Fleming contributed 11 goals and 5 assists while delivering in the clutch with her new team. It was a new opportunity for the London, Ontario native, and one she certainly excelled in.

“It was good,” said Fleming, “I really enjoyed my teammates, and the school. I think it was a good opportunity for me to get into a different team. It gave me different challenges, and it forced me to play a bit differently than I’m used to. I really enjoyed it.”

Fleming picked up a few well deserved accolades that don’t usually happen for a freshman. She earned, NSCAA All-America honors, Top Drawer Soccer’s Freshman of the Year, First-team NSCAA All-Pacific Region, First-team All-Pac-12 and All-Freshman selection. Spoken like a true veteran, Fleming wasn’t about to take all the credit for her achievements.

“It was definitely a good first year,” said a modest Fleming. “I think we just had a really good team. We were really connected in our midfield, just a lot of good players. They make it so much easier for me to play. We just had a good season as a team.”

Fleming’s quick ability to adapt to her new life with UCLA is quite impressive when you realize that she missed part of preseason last summer. You’ll have to excuse her because she was busy helping Canada earn a bronze medal at the 2016 Rio Olympics. Once she did join up with UCLA, everything started to click and she fit in perfectly.

“I guess I didn’t expect it (UCLA) to be such a seamless transition,” said Fleming. “I’d never met them before. When I got in, they’d already been in preseason for a month. It was just so easy to play with them. Honestly, I just really enjoyed the soccer.”

Canada coach John Herdman though, is not sold on the college experience for a young player as good as Fleming.

“I think it’s just easy for her there,” Herdman said of UCLA. “I don’t think there’s really any progression at the college level. I think the college system is an easy ride for these players. I wish they were playing in more competitive environments. Even at 17, 18, like the Germans, French, and English do.”

Asked of he thinks Fleming should go to Europe now Herdman added: “I would just love to see our young players playing professionally earlier, and managing academics at the same time.”

It’s crazy to think that Jessie Fleming is still only, 18 years-old. She played for Canada at the 2015 World Cup, and has 36 international caps, and 3 goals to her name. The sky is the ceiling for Fleming, and her success with UCLA will only continue to grow. How did she get so good, so fast, and which new position helped to pile up the goals?

“I think part of that has to do with the level of defending,” said Fleming. “International defenders are at a different standard. I was playing the false nine for most of the season at UCLA. That helped, I was a bit higher up the pitch. I definitely want to find a way to score more goals for Canada.”