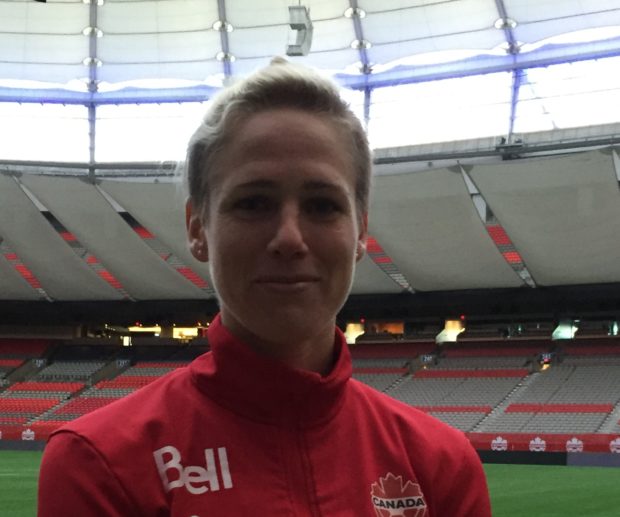 Sophie Schmidt is loving life in soccer mad Germany, but is also savoring the culture with the Canadian national team (photo copyright Harjeet Johal for The Equalizer)

VANCOUVER, B.C – There won’t be any chants of ‘Holy Schmidt’ when Canada takes on Mexico Saturday afternoon at B.C. Place Stadium. Sophie Schmidt is practicing with her teammates, but her availability on the weekend is unlikely.

“As of right now, I’m not in the plans to play against Mexico,” said Schmidt. The 28 year-old injured her left arm during a match with her club team, FFC Frankfurt.

“It was in an exhibition game in Germany,” said Schmidt. “I broke it, a little fracture. I went into a tackle, and about three girls fell on me.”

{RELATED: Labbe, Chapman excited to get back on Canadian soil}

While Schmidt is sporting a cast, she is not expected to be sidelined long-term. She should be ready when FFC Frankfurt returns from the Frauen-Bundesliga winter break on February 19 at Borussia VfL Mönchengladbach. Canadian fans will have to wait until March to see Schmidt in the red and white.

“For sure Algarve”, said Schmidt, when asked about her return to play schedule. Canada open Algarve Cup play on March 1 against Denmark.

Playing in Germany has opened up a whole new light and viewpoint for Schmidt. It’s an honor to be able to play football at a highly competitive level in a football crazy country like Germany. Coming back to Canada for camp evaluations, matches, and family visits has put the beautiful game in a new perspective and admiration for Schmidt.

“Yeah for sure, it definitely gives you an appreciation, and being thankful for what we have here. We are truly blessed, first and foremost with an association that supports us, hands down, and (a) coach who is just unbelievable. You go away, you come back, and you’re like, wow. (John Herdman)’s something special, and you try to make the most of every moment that you have. The kind of team environment, and culture that we have here, it’s rare in women’s soccer. You come back and it’s a breath of fresh air. It’s challenging, and I don’t think that you find that in a lot of cultures or environments, where you’re constantly growing as a human being, but also in your craft.”

Schmidt has had the opportunity to play for club and country all over the world. You don’t earn 157 international caps, 17 goals, and 16 assists just out of luck. Schmidt has worked hard and taken her chances. Going to FFC Frankfurt after a disappointing experience in NWSL was a risk, but it’s something that has turned out brilliantly.

Immersing yourself in a nation that eats, breathes, and sleeps football like Canadians do with hockey, opens up entirely new horizons and avenues. Sophie Schmidt has come back to Canada as a better, more complete player. Germany was the perfect fit, at the right time in her career, and she couldn’t be enjoying life more.

“It’s great, I love it,” said a smiling and happy Schmidt. “There’s so many opportunities. Every where you look, someone’s talking about soccer. It’s on TV’s, people just breathe it all the time. I think it’s helped grow the game in a different way, just the passion, and love for it. It’s a bit of a different culture over there. It’s cool to be a part of that, where soccer’s first, and everything else is kind of nothing.”

“Yeah, that is the plan,” said Schmidt.