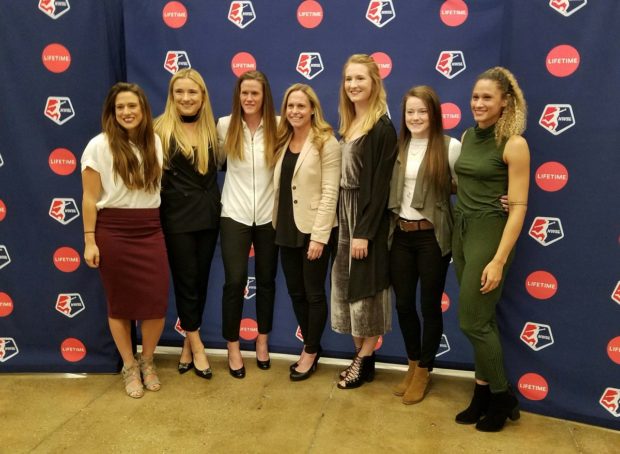 The WUSA was on its last legs in 2003 when the first part of the semifinal between the Atlanta Beat and San Diego Spirit didn’t go on the air. ESPN2 was carrying the game, and a preemption sliced out the first 20 minutes of the game. It never re-aired. Weeks later, the WUSA folded, and the future of professional women’s soccer in the United States suffered its first major crisis.

Cut to February 2, 2017, in an amphitheater in midtown Manhattan. There were cupcakes and champagne on order. A livestream was going out to the entire world. There was even a spiffy trailer whose production values most sports leagues would take for granted.

What was it all for? A press conference with US Soccer president Sunil Gulati and National Women’s Soccer League commissioner Jeff Plush was about to commence. More than 14 years after ESPN2 kicked the WUSA to to the curb, Plush announced that A+E Networks had agreed to a three-year television rights deal with the NWSL. A+E CEO Nancy Dubuc proudly declared that the Lifetime network was now in the sports business. How far the sport had come.

“We couldn’t ask for a more complete partner,” Plush said of the new deal. “We are trying to create a platform for young women. We’re very appreciative of the burgeoning friendship we’re embarking on. We’re adding another chapter to our story.”

That chapter is fairly multi-layered. In addition to the broadcast of 20 game-of-the-week-style matches on the Lifetime Network—a basic cable channel carried in 96 million homes worldwide—Plush also announced the launch of NWSL Media, a joint digital venture between the league and A+E to livestream the rest of the league’s matches, as well as create new digital content for all 10 teams and their players. Plush declined to comment on the specifics of this new venture, but multiple sources assured The Equalizer that every game not broadcast on Lifetime would be livestreamed. (Plush could confirm that livestreamed games would be archived for later viewing.)

It wasn’t just the presence of the network head and top league brass that signaled the weight of the occasion. No less than four of the league’s 10 team owners flew out to be present for the announcement, including Sky Blue FC majority owner Steven Temares, Chicago Red Stars owner Arnim Whisler, Houston Dash president Chris Canetti and Seattle Reign FC owner Bill Predmore. Sky Blue defender and former US Women’s National Team captain Christie Rampone also took to the dais to offer a player’s perspective on the deal, a perspective that carries a long history with it.

“Being in previous leagues, we know how important it is to have a partner like A+E give us a platform,” Rampone said. She should know. She saw WUSA come and go. She saw Women’s Professional Soccer come and go. She saw the slow, often very limited progress of the NWSL until it finally crossed into yet another record season, the league’s fifth.

No television deal has ever been quite like the one A+E is bringing to the NWSL, a deal that multiple sources confirmed was in the works for nearly a year. Twenty-two games will be broadcast live on the Lifetime Network, in a Saturday afternoon, game-of-the-week format. The playoffs and NWSL Chhampionship will also be aired on Lifetime Additionally, Dubuc pledged for additional ancillary content that will be part of the core of Lifetime’s brand, going beyond just a pregame, halftime and postgame show. While neither Dubuc nor Plush wished to comment on the incoming on-air talent, both sounded excited.

“Lifetime isn’t just a television brand,” Dubuc said. “It’s a female media brand. We’re not in the game-of-the-week business. We’re in the business of the NWSL. If you’re going got be a media brand, you have to make sure you’re speaking to all women with all interests. That’s our job. It’s an opportunity to bring younger women and girls to Lifetime.”

The question of what type of audience Lifetime and the NWSL could cross over on was one that Dubuc seemed confident would happen organically: “45 to 50 percent of the NFL’s audience is female. Women watch sports. Sports are great dramatic stories. If those stories ares told in a passionate and creative way, women will be interested in that.”

“There is the modern reality of cross-generational viewing,” Plush added. “I’m very happy to say I watch Project Runway and Dance Moms with my daughter. It’s a new day with how people consume media. Content is what matters.”

That scope indeed appears to be wide-ranging. “A+E’s commitment goes far beyond the national team players,” Gulati said. “They have a commitment to make stars of these players.”

Perhaps the most surprising element of the deal was that A+E Networks was now an equity partner in the NWSL, putting up serious investment in the league, as well as holding two seats on the board. No one would comment on how much money A+E was investing in the league, but many felt it to be “substantial.”

“This is an integrated partnership,” Plush said. “They are an investor. I can’t get into the details, but it’s a long-term partnership.”

“The investment from A+E allows for us to do some other things that the league might not have been able to accomplish,” Gulati said. “It’s somewhat indirect, less a straight line and more of a dotted line.”

On its face, such an investment would suggest that A+E is committed to not just getting into the sports broadcasting business, but rather wishes to be a player in the women’s sports business as a whole. Dubuc certainly speaks in such terms.

“Not only is soccer an incredible and dramatic sport, but also in the narrative of empowering women, being an incredible athlete is an enormous part of being a successful woman,” she said.

“Being a college athlete was a huge part of me becoming a CEO. You have to be aggressive, and you have to compete. We want to show girls and women around the world different ways to think about themselves.

“This isn’t a short-term project. We are committed to growing the league. US Soccer’s involvement is important. Growing a business doesn’t happen overnight. Growing a league is similar to growing a media brand. Our executive team understands that.”

Needless to say, US Soccer, the NWSL, and its owners and players believe that this deal is a win for all involved. How it will transpire over the next three years will be very telling, of the growth of the league and of the sport in the United States. In the meantime, Christie Rampone sipped champagne with Rose Lavelle, the Mewis sisters, Lynn Williams and Stephanie McCaffrey while the most important people in American women’s soccer milled around, savoring their accomplishment.